Put It to a Vote

A BYU professor recommends a provocative restructuring of the U.S. judicial-nomination process. 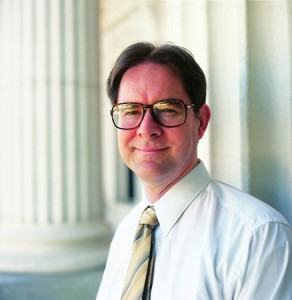 When Richard Davis witnesses the intense partisan wrangling over federal judicial nominees, he sees symptoms of an ailing system. In a new book, he prescribes a fundamental reformation of the judicial-nomination process. Photo by Bradley Slade.

The recent congressional fighting over President George W. Bush’s federal court nominees may come to seem like only minor skirmishes after the major battles erupting as the Senate debates a replacement for retiring U.S. Supreme Court justice Sandra Day O’Connor—and others who may announce retirements soon.It has been 11 years since a Supreme Court justice was appointed. With a conservative Republican president, a Republican-controlled Senate, and imminent changes to the Court, the pressure that has built on both sides of the aisle is palpable. In the spring scuffle, Democrats threatened to filibuster and Republicans threatened to remove the power to filibuster. The media spent countless hours covering the bickering. By May, television, radio, and newspaper ads had begun, paid for by activist groups, asking voters to lean on their senators. All this over a fistful of lower-court nominees. According to BYU political science professor Richard Davis (BA ’75), these battles are symptomatic of a broken judicial-nomination process and a disturbing omen of things to come. “It could well be that it all blows up in one of the next Supreme Court nominations,” Davis says. But he believes it doesn’t need to. In his provocative book Electing Justice: Fixing the Supreme Court Nomination Process, Davis concludes that the process has permanently evolved and needs a major redefinition.“The formal outline of the process should conform to what the process actually has become,” he says. The closed nomination process established by the framers of the Constitution involves just a few players: the president nominating a Supreme Court justice, the Senate confirming or rejecting the nomination, and the Court itself, which signals when the process takes place as justices, who serve lifetime appointments, retire or pass away. External players and political undercurrents, however, have perennially appeared—from George Washington’s nomination and defeat of John Rutledge in 1795 to Bill Clinton’s nomination and confirmation of Stephen Breyer in 1994. But Davis sees a marked difference in the most recent decades. He cites the defeat of Ronald Reagan’s 1987 nominee, Robert Bork, as a culminating example of an irrevocable change in the process, in which aggressive Senate debates, drawn-out press coverage, and media campaigns reached a new level. “There is a critical difference between the past quarter century of Supreme Court nominations and the previous nearly 200 years,” Davis says. “External force involvement has clearly increased to the point of a significant and permanent role today rather than an occasional appearance.” Davis’ controversial recommendation? If it looks like a campaign, acts like a campaign, and smells like a campaign, why not make it a real election? “Since the press, interest groups, and the public have become involved, we ought to formalize that and give the public an official mechanism for involvement,” Davis says. “An interest group could claim a candidate represents public thought, but when the public votes, that’s the real test. We don’t have a real test here. The public doesn’t get to have a say.” Though unconventional, Davis’ ideas have sparked conversation in academic, legal, and political arenas. “Not only does Davis tackle a subject of extreme interest and concern to scholars and policy makers alike,” remarks Lee Epstein of Washington University in St. Louis in a review of the book, “he also takes the important step of developing the implications of his study—in the form of intriguing recommendations about how to reform the nomination process.”

Davis isn’t looking for a complete overhaul. He doesn’t want, for instance, Supreme Court elections to become partisan, with competing candidates representing political parties. Rather, Davis recommends options that maintain the constitutional roles of the internal players while adding a role for the public. 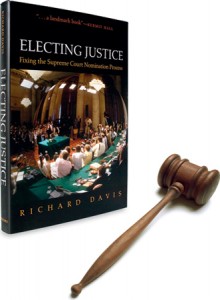 In one option Davis proposes that the president nominate a set number of candidates for the general electorate to vote on. Senators would play an advisory role in scrutinizing candidates and offering opinions.

Another election option would have the president nominate a candidate, the Senate vote, and then the general public vote. If a majority in either the Senate or the general public voted in the negative, the candidate would not be confirmed. As a third option proposed by Davis, the president would nominate a candidate, the Senate would vote, and the general public would vote only if the candidate failed to get 60 percent of the vote in the Senate. In addition, Davis recommends an 18-year, nonrenewable term for Supreme Court justices with a seat opening every two years, which would prevent the build up of pressure between appointments. “There are different ways you could do this,” Davis says. “The whole point here is that the public gets to play a formal role in the process.” The kicker—any of these scenarios would require a constitutional amendment. Short of an amendment, Davis sees additional ways to improve the process immediately. Davis recommends time constraints, saying the president should have 30 to 60 days to nominate and the Senate 60 to 90 days to confirm or reject a nominee. Davis would also like to see a process in which nominees are more encouraged to express their views. Instead, it has become a cat-and-mouse game of senators trying to dig up nominees’ opinions on certain issues and nominees trying to hide them. Davis acknowledges that some of his recommendations are dramatic, but the difference between the Supreme Court–nomination process of today and a generation ago is also dramatic, he says. “The democratization trends that have existed in American political life are now hitting the last institution—the Court,” Davis says, noting that 200 years ago the president was elected by the electoral college and U.S. Senators were elected by state legislators. “We can’t put the genie back in the bottle. We can’t say ‘Let’s depoliticize the Court, and let’s go back to the president and Senate making the decision alone.’ That’s just not possible to do, no more than you could say to the public, ‘We’re going to have electors elect the president from now on.’ We can’t go backward,” Davis says. “So the best thing is to acknowledge that we’ve changed and include the Court in that.” Davis’ ideas have piqued the interest—for good or ill—of members of the legal community, academia, and the media. His ideas have been called provocative, insightful, and innovative. They’ve also been called controversial, unsettling, and exasperating. Pittsburgh Post-Gazette editor-at-large Michael McGough, in a March 14 column, said he found the proposals unsettling. “The cure . . . for the ailing confirmation system is worse by far than the disease.” He notes that many states, including his own, already have judicial elections with their own coterie of “unsatisfactory consequences,” including increasing influence of special-interest groups in shaping public opinion.Tony Mauro, Supreme Court correspondent for American Lawyer Media, wrote that “[Davis’] suggestions for reforming the process are controversial, but should provoke a national debate on how to enhance our democracy and avoid more Robert Bork– or Clarence Thomas–style donnybrooks.”To Davis, a debate seems the right place to start. “A debate will require the proponents of the status quo to come up with justifications for that status quo,” Davis predicts. “I think that would be healthy.”