The concept of progressive perfection may seem to be an oxymoron to some (and theologically untenable to others). But having spent five weeks in the past 12 years at Aspen Grove, it’s about as succinct a description of the Alumni Association’s family camp as I can muster. The first time my family and I went there, during the summer of 1983, we enjoyed a week’s vacation that exceeded anything we could imagine. In part that stemmed from the fact that someone else prepared all our meals for us (and then did the dishes), but it was also because our children were involved in fun and meaningful group activities each day and my wife and I had little more to do than lie around and read books, attend lectures, take walks, or sleep whenever we felt so inclined (which, with our young family, was frequently). Given that first experience, my finite mind has had some difficulty comprehending how the staff at Aspen Grove has managed to improve the experience each time we’ve gone back since 1983.

The setting, after all, is pretty much in place. Mt. Timpanogos isn’t going anywhere, the stream that rolls through camp set its course long before Franklin S. Harris established Aspen Grove as BYU’s summer school in 1922, and the towering pines do a pretty good job of replenishing themselves. As talented as he is, Glen Parker (the camp’s director) isn’t going to improve on the sweeping vistas, the pure blue skies, or the first and last glints of sunlight each day; nor can he do much about the wildlife that wanders in and out of camp (my seven-year-old can immediately differentiate between a squirrel and a chipmunk, and we’ve seen several deer and two moose from a fairly close range).

Glen does tinker a bit with the great outdoors; in fact, some of his student employees joke about work projects involving moving rocks from Point A to Point B, and his staff has laid some sod in common areas to cut back on mud. But, knowing his limitations, he mostly focuses on improving the experience for the hundreds of families who come each summer to enjoy one of the Alumni Association’s most effective outreach programs, as well as the increasing number of groups who come for fall and winter activities.

“The Alumni Association’s desire is to provide a facility to bring alumni and their families back for an association with the university,” Glen explains. “We’re only 25 minutes from campus, and the camp is one way to keep people connected with BYU. Beyond that, however, we hope the camp provides families with the opportunity to fall in love with each other in ways that aren’t always possible in a society where parents and children can end up spread awfully thin and where the bonds of love can sometimes become a bit frayed.”

Let’s see now, the first time we came to Aspen Grove, we had three daughters, the oldest of whom was five. Given that she wasn’t yet driving and her friends generally couldn’t play after dinner, we spent a considerable amount of time together–vacation or no vacation. But since that first trip, we’ve added three more daughters, our five-year-old has turned into an 18-year-old, and three of our other children have turned into teenagers as well (even though one is only 11). Are we spread thin?
Well, the last time my family actually ate three meals together on a given day was . . . hmmm, let’s see . . . the last time we vacationed at Aspen Grove? In truth, there are times when we don’t eat three meals together in a week! But at Aspen Grove, we not only eat three meals together (with polite servers bringing us extra servings of whatever we’re running low on), we also all live together in a two-room cabin that is considerably smaller than most of middle-class America’s living rooms.

Glen likes to talk about “the old, rustic cabins, where you’re literally thrown in on top of each other in a setting that is one step above a tent.” Hey, it’s sink or swim. Minor irritations don’t exactly go unnoticed in such settings, and we’ve found a need to work at problems a little more constructively than we do when there’s the convenience of retreating to a distant part of the house.

When Glen says the camp provides a setting where families can “rediscover each other,” he knows whereof he speaks. The truth is, each time we go to camp, we always encounter just a bit of culture shock as
we walk into our assigned cabin–and then scope out how close it is to the community restrooms. But then we find ways to adjust–and by the end of the week there’s something noticeably different about how we’re relating to one another. Glen likes to tell about the parents who started bringing their children to camp 20 or more years ago and who are now bringing not only those same children, but in-laws and grandchildren as well–each and every year in some cases. The camp–and this isn’t an overstatement–is perfect for such gatherings, and it really does get better with each passing year.

For example, the cabins are now all carpeted (as compared with the circa 1950s linoleum that had covered the floors). It’s a small thing, but an improvement that’s made life at Aspen Grove just that much better. On a larger scale, though, the camp has responded to the fact that the families who come now are, in many cases, multigenerational. Two years ago, not coincidentally, four family lodges were opened, each of which will sleep some 30 adults and children and is equipped with a kitchen, a living room, and bathrooms. During our most recent visit, we got to know several of the 61 (out of a total of 73) descendants of the late O. Leslie Stone who occupied two of the lodges at Aspen Grove for their reunion, which was made possible by the fact that the camp’s staff operates from the premise that you actually can take a great thing and make it better. (Interestingly, Tom Stone, one of the sons who helped orchestrate the reunion, is a member of the Alumni Association’s Board of Directors, which provides oversight for Aspen Grove and helped develop the master plan that included constructing not only the four family lodges but a new dining hall and swimming pool as well.) 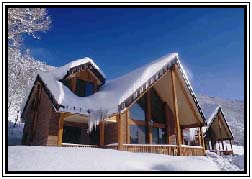 Having these lodges has not only improved the camp’s summer programs but has expanded its fall and winter activities as well. Given that the smaller cabins are basically inaccessible during the winter months, the camp was severely limited in its ability to host groups. As the larger lodges were being designed, part of the plan was to provide year-round access, with the result being that the camp can offer a wider range of fall and winter activities. Over the past two years, the Alumni Association has begun sponsoring marriage weekend getaways at Aspen Grove (which feature both ample time to relax and marriage enrichment workshops), as well as football weekends, (which include Friday-night accommodations, breakfast, and tickets for Saturday’s game). The camp has also hosted an international computer conference, a series of overnight leadership seminars for the Provo School District, and various activities for BYU departments.

“The new facilities have given us an opportunity to do things we couldn’t do before,” Glen explains. “We see the camp as offering a very positive contribution to the university, its alumni, and the community during the winter months, and while our major thrust will always be the summer family camp, we’ve seen our fall and winter program grow in the past five years from serving about 2,800 people in the ‘off’ season to over 10,000. Most of these families and groups come with their own ideas and agendas, but we offer families and others a pristine setting for activities ranging from cross-country skiing to cooking up a Thanksgiving dinner.”

So, never content with past successes, Glen and his staff continue to look for ways to extend the camp’s reach and enhance its existing programs. Part of me fails to see why. After all the camp has been perfect since my first contact with it almost 13 years ago. But then I remember that each time my family and I go, we have a better experience than the time before. I know that statement doesn’t hold up to careful analysis; after all, if something is perfect it can’t get any better, right? In most cases I would agree, but not when it comes to Aspen Grove. During our last visit, I read more books cover to cover than I ever had in a single week, I finally hiked Timp (and saw more bluebells than I had ever imagined–and not a hint of morning glory anywhere), and I enjoyed several spectacular runs along the Alpine Loop.

And while during that week I never could sink more than two free throws in a row, the week still was nothing short of perfection.

Bringing the World to Our Campus

Alumni joined together at the International Volunteer Leadership Conference sponsored by the BYU Alumni Association.

Students support and uplift each other through health challenges.