To succeed in a free-market economy, many Polish people believe they must put their initial emphasis on business and not on education, says a BYU doctoral student in educational leadership.

Once the business climate has matured, the Poles say their country can put more money and resources into education. Unfortunately, this formula may not hold the answer to the prosperity these people are looking for, says Kathy Merrill, who recently spent four months in Poland studying the changes being made in education as the country makes a difficult move to a new economy. 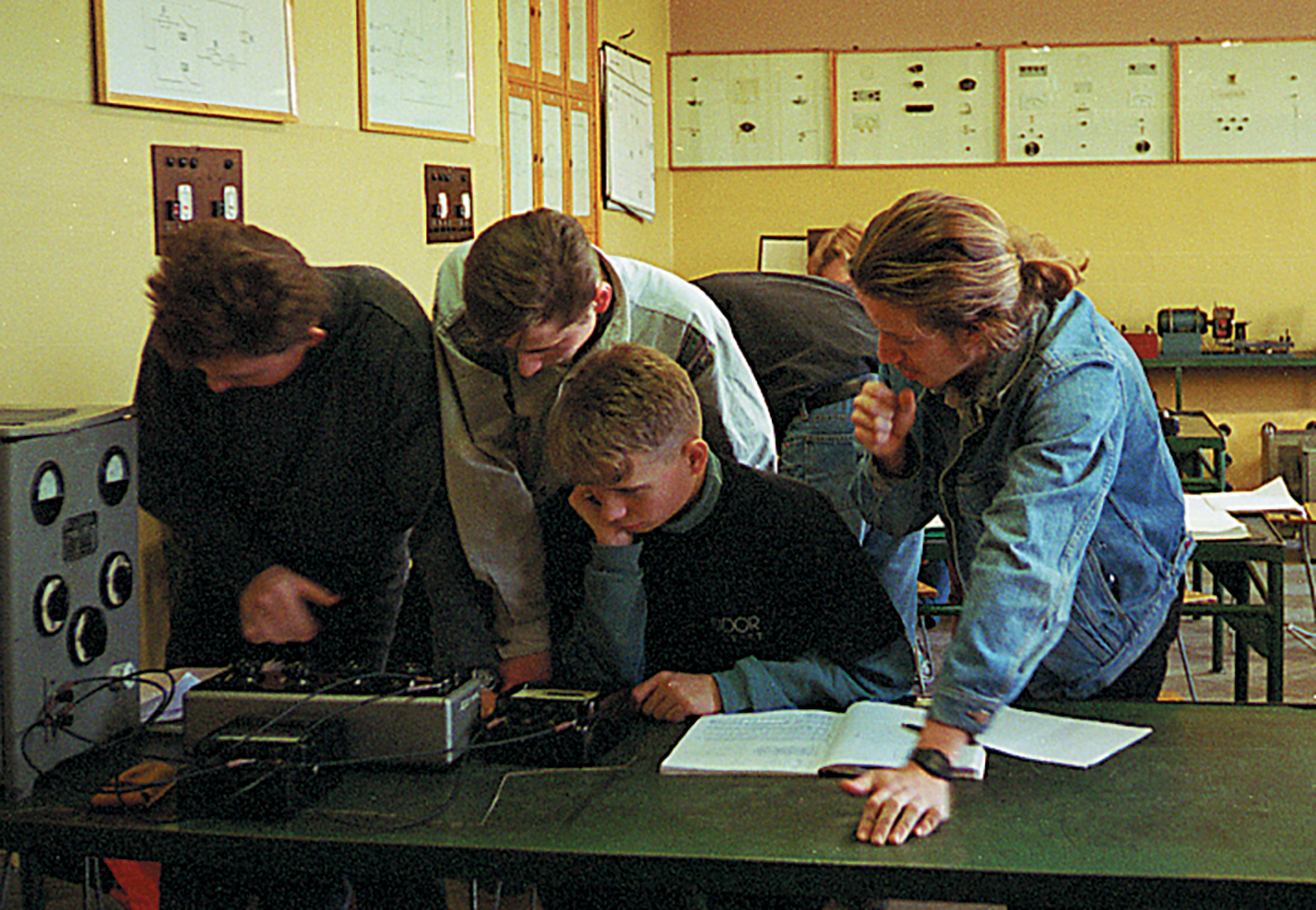 Polish students collaborate on a project at a technical secondary school in Cracow, Poland. Many of these schools continue to educate students for jobs that no longer exist. Photo by Kathy Merrill.

After looking at the system from the outside, Merrill concluded that without making the effort today to build an effective and enduring educational system, Poland will not have the foundation it needs to succeed in a free-market economy.

“Right now its focus is on getting the economy going,” Merrill explains, “thus its schools are extremely strapped for money.”

So strapped, in fact, that the only guarantee the government gives the school system is that teachers will be paid—usually about $150 per month, per teacher. “Maybe” the utility bills are taken care of each month, adds Merrill. And not only are textbooks purchased by parents, but individual schools must raise the money to provide additional resources for their students.

Without making the effort today to build an effective and enduring educational system, Poland will not have the foundation it needs to succeed in a free-market economy.

In contrast to the vocational and technical schools, the lyceums (similar to high schools in the United States) provide students with a broader education and a possible chance to go on to a university, which signiﬁcantly increases their chances for employment and long-term success in an emerging economy. However, only 5 to 10 percent of Polish students currently have the opportunity to obtain a university education. Only 27 percent of students even get the chance to attend a lyceum.

A one-time leader of the solidarity movement, Poland has become the country to look to again for coping with the move to a free-market economy. Therefore, for Merrill and other educators, this is an ideal time to study the Polish educational system and how it is coping in a changing political environment.

In looking at change world-wide, Merrill notes that a country’s education always has an important impact on the structure of people’s lives and on the country’s economy.

Merrill is concerned about the motives behind the industries coming into Poland from other European countries, Japan, and the United States. The sparse wages from the communist regime haven’t increased much, and now it is becoming apparent that many foreign investors haven’t come to improve Poland but to get cheap labor.

Merrill believes that in order to solve such problems, the Poles need to develop a broader vision of what education is all about. “Most people I talked to about why they educate their children focused solely on the idea, ‘So they can make a living.’ And their educational system is geared that way,” she says.

Lacking this vital visionary foundation, Poland continues to emphasize narrow, skill-speciﬁc courses. Hence, a more general education—
one with studies that prepare students for the future and also improve their thinking, understanding, and ﬂexibility—remains a hidden dream.

But during her 67 interviews with 94 individuals, Merrill not only gained insight into the educational system of Poland but also learned about the spirit of the Polish people.

“They are a very resilient people,” Merrill notes. “They have a great desire to develop a central unifying vision to drive their country into the next century. If any group of people can accomplish this, they can.”

Of Crown and Country