As Becky (name changed) was growing up, she remembers watching helplessly as her father disfavored one of her brothers—putting him down, ignoring him, and singling him out for harsher punishment than she or her siblings received. When her brother became a teenager, he got into risky behavior that led to addiction and other problems that continue in his adult life.

Becky found herself working hard to stay in favor with her dad. “If I wanted to be his favorite, I had to do what he wanted, even if it had nothing to do with right or wrong. When I did, I would get that favorable treatment. When I didn’t do what he wanted, I wasn’t the favorite anymore,” she said. 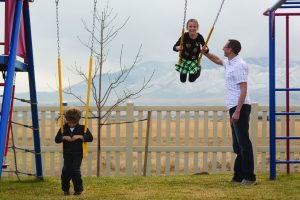 Children’s conclusions about parental favoritism may or may not be based on how their parents actually feel or behave. Parents can’t always change perceptions, but they can work to create warm and open family relationships.

According to family life professor Alexander C. Jensen (BS ’09), perceived favoritism in unengaged families like Becky’s can be deeply damaging. On the other hand, parents who create a warm, loving, and open atmosphere can make mistakes in favoritism and probably not do much harm.“Teenagers in unengaged families who see themselves as decidedly less favored are 3.5 times more likely to abuse alcohol, cigarettes, or drugs,” says Jensen, whose study (with Purdue professor Shawn D. Whiteman) of 282 families appeared in the August 2014 Journal of Family Psychology.

Every family deals with favoritism to some degree, says Jensen. But there’s hope: parents can minimize harm to their children by understanding several principles from his recent study and from other family science research.

According to Jensen, nearly every child draws conclusions about parental favoritism that may or may not be based on how their parents actually feel or behave. Some children think they’re the favorite or the disfavored no matter what is objectively happening in the home.

“You can’t really control what kids think,” says Jensen, “but you can control how much love and warmth is your home. If you love your kids and show it, they’re probably going to be fine even if there’s some favoritism going on from time to time.”

That doesn’t mean that if a child says things like “She’s your favorite!” you shouldn’t pay attention. You should, says Jensen. Chances are high that something is going on, whether it’s favoritism or something else. Parents can take such expressions as an early warning sign that a child needs more one-on-one time.

He also warns against focusing so much on trying to right favoritism accusations that the more important issue in parenting—warmth and openness—gets short shrift. “If you’re focused on balancing favoritism, that’s stressful as a parent. It might distract you from actually being a good parent to each kid.”

Children notice when they’re not treated equally with their siblings, and they’re often vocal about what they see as injustices. Some parents respond by trying to treat their kids exactly the same, but Jensen says this is not a good solution. “An extreme example is a family I knew of that had two boys, one with a disability where he couldn’t be outside in the sunlight hardly at all. The parents were concerned about treating the kids equally—not fairly but equally. So the non-disabled brother was not allowed to go outside. That clearly is not healthy. I wonder if in normal families there isn’t some of that too. Trying to treat everyone equally makes it so no one is treated fairly.”

“Fairly,” says Jensen, means responding to individual needs. “Kids need a child-centered focus rather than trying to achieve a perfect balance—child A got this much so child B should get this much,” he says.

Sherrie Mills Johnson (PhD ’03) raised nine girls and one boy, and sometimes one or another would complain to her of favoritism. “We would sit down and talk about it. Sometimes they would say, ‘Well you did this for her.’ I would explain that what works for one child doesn’t work for another. Usually if I just sat down and talked it through, they would be fine with it,” says Johnson.

Jensen himself worries about favoring one of his two daughters over the other. From the day she was born, he clicked with her more naturally. “She wants to spend time with me more than with my wife and just seems more inclined toward me,” he says.

These natural inclinations don’t generally create problems if the parents are warm and loving. Still, he says, it’s good to recognize preferences so parents can make more of an effort to meet the needs of children they’re less naturally inclined toward—a circumstance that happens in most families.

If your family is warm and close but fights a lot, you might be worried. But Jensen found that teenagers in families with high conflict and high warmth did not show increased risky behavior. He believes that if you don’t fight with your teenagers at least sometimes, it could mean that on some level you don’t care. “It’s normal to fight with your kids. Some families fight a lot, but that doesn’t mean they’re not healthy, as long as they’re also warm and loving.”

Teenagers do tend to be away from home more, and parents might worry that this means the family is not as close. Jensen says this is normal. “The amount of time teenagers spend with their parents drops dramatically from 7th grade to 12th grade. So you need to ask yourself what kind of warmth, what kind of companionship you feel with your kids when they are around. Does it seem like they love you?”

If, on the other hand, your family is high in conflict and low in warmth, strong measures need to be taken that might include family therapy, parenting classes, and rehab. At this low level of parenting, says Jensen, there is no link between favoritism and substance abuse because teenagers are likely already using substances at high levels. “Kids in these families are just doing badly all around. Favoritism problems don’t matter anymore because these families are just so conflicted and disengaged and unhealthy.”

Throughout the parenting years, says Jensen, it’s important that moms and dads provide the basic ingredients of strong family life that researchers have consistently pointed to for several decades now: consistently connecting with children in a loving way, setting reasonable limits, and allowing children an age-appropriate measure of autonomy.

Sherry Johnson, whose 10 children are now grown, knows from experience that these principles work: “When we were raising our children, there were often rough times and all kinds of things happened. Favoritism happened, or the kids thought it did. But overall, in the end, we love each other and we’re happy.”

Warmth and closeness in families protects children from favoritism fallout when parents inevitably make mistakes. Here are some ideas for building this kind of family life.

Caring for the Caregiver

To successfully watch over another, caregivers must also watch out for themselves.