Emblazoned on the projector screen are the words “I-Don’t-Care-itis: The Most Common Health Problem in America.” Standing in front of the class, physical education teacher education (PETE) professor Keven A. Prusak (BS ’86) gets tough: “We’re going to talk about some reality checks for you, me, and everybody else that lives in America,” he says to 22 of the most svelte students at BYU, all aspiring PE teachers. You’d think he’s preaching to the choir, but, notes Prusak, they share the same unhealthy diet as many Americans, and trends show their athletic activity will likely wane with time. Prusak reiterates adamantly, “It is you.”

This semester, Prusak will put them on a four-week lacto–ovo vegetarian diet. He’ll have them exercise with a weighted backpack to mimic the condition of obesity. And he’ll have them place a clothespin on their nose and a straw in their mouth while exercising to show the breathlessness of lung disease. 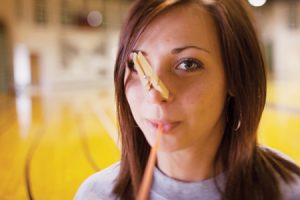 It’s all part of a new course that’s turning PE on its head: PETE 301, which teaches a new PE pedagogy called healthy and active lifestyle management (HALM) for grades K–12. Created by McKay School faculty Carol Wilkinson (MS ’81), Todd R. Pennington (BS ’91), Maria Betioli Zanandrea (MA ’83), and Prusak, along with exercise science professor Ronald L. Hager Jr. (BS ’91), HALM has retooled PE in the name of fighting childhood obesity. It focuses on teaching kids healthy habits rather than sports acuity alone. “We had a program that teaches people how to teach . . . dribbl[ing] basketballs and throw[ing] footballs,” says Prusak. “We weren’t prepared at all to have teachers go out and teach anything about [healthy lifestyles].”

Prusak asks his students: “What contributes to I-Don’t-Care-itis for you?”

“At our age, you can still feel healthy even if you’re not,” answers one.

“We’re almost immortal, we’re so dang healthy when we’re young,” Prusak responds, putting up slides of unflattering stats on the American lifestyle. “We eat the most in the world, but what we eat is garbage,” he says. “Sixty-seven percent of our adults are obese and, get this, 67 percent don’t get enough exercise.”

One slide shows a sheet of yellow fatty gel. “This is what comes out of an aorta,” he says. “That’s the big culprit in heart disease right there.” Chronic diseases like diabetes, heart disease, and cancer, he continues, are 70 to 91 percent preventable through a healthy lifestyle.

Whether a HALM approach to PE will help clear Americans’ artery buildup remains to be seen, but BYU’s restructured PE–teaching program is gaining traction. BYU’s approach was featured last year in the Journal of Physical Education, Recreation and Dance—the most widely read journal in its field—and school districts in Utah and Connecticut have already implemented BYU’s approach. Joe Robusto, a PE teacher using the HALM program at New Fairfield High School in Connecticut, says that before, up to one-third of his students wouldn’t dress for class. Now he’s got almost 100 percent participating. “Prusak’s ideas were probably the biggest difference makers,” he says.

The message of HALM is simple: a healthy diet and exercise matter. But that message also implies that PE is no longer a stage where the jocks shine and the rest endure. PE should teach activities that can be sustained as an adult, says Prusak, from kickboxing to hiking—exercise options he hopes will empower change. “We are not simply victims of our environment,” he says. “We have a great deal of influence. . . . Changing lifestyles will change the health picture of America.”

Join me on a quick-paced, mind-swinging jog-walk through a selection of recent books written by alumni of BYU.

In Sickness and Health

It turns out that the health of your spouse is as strong a predictor for your own health.