By Michael D. Smart in the Spring 2000 Issue

The 15 million Americans who suffer from type II diabetes all share the same problem: their muscles have difficulty absorbing glucose–a sugar that provides energy–from their bloodstreams. For years, scientists have known that physical exercise helps muscles take in glucose, but until now they haven’t fully understood why. BYU’s William W. Winder has identified the key enzyme involved in triggering glucose absorption, and he has repeatedly stimulated the process in rats with a drug, producing some of the same beneficial results that exercise provides, including increased glucose uptake.Winder’s discovery opens up possibilities for scientists to try to find a drug that will safely achieve the same effect in humans. It also puts researchers one step closer to discovering what causes type II diabetes. 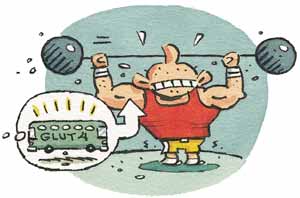 “We believe this to be a step forward in the effort to provide more effective treatments for patients with type II diabetes,” says Winder, a professor of zoology. “There is still much work to be done before we can apply these findings to humans, but these results give us a good springboard.”His findings help fill in a missing link to understanding one of the body’s chain reactions, the one ignited by exercise that results in better absorption of glucose into muscles. In this reaction, glucose is transported into muscle cells by proteins called “GLUT4.” These transporter proteins act like buses that carry their passengers, glucose molecules, to muscles. Type II diabetics have just as many “buses” as healthy people do. But recent studies indicate that without regular exercise, the GLUT4 proteins in type II diabetics may stall and not carry glucose into the muscle. Regular exercise stimulates the creation of more transporter proteins, and those reinforcements are thought to enable diabetics to absorb enough glucose to stay healthy. The ability to help type II diabetics manufacture more of the GLUT4 transporter proteins is a key in combating their disease.What scientists didn’t know until Winder’s study was how exercise turns on the gene that tells the body to make more transporters. He found that the spark plug of that process is an enzyme called AMP-activated kinase (AMPK). This enzyme is normally activated when muscles contract.
“The discovery that activation of [this enzyme] increases transporter protein is a major finding, because it gives us both an explanation for how exercise increases glucose uptake in muscle and also a possible pharmacological treatment for diabetes,” explains Lynis Dohm, a GLUT4 researcher and professor of biochemistry at the East Carolina University School of Medicine. “Any treatment that will increase the rate of glucose transport into muscle will be a useful treatment for diabetes.”Winder emphasizes that there is more to the AMPK story than these new findings. Building on the work of previous researchers, his team–including Grahame Hardie of Dundee, Scotland, and Gary Merrill of Rutgers–published a paper in 1997 that was the first to report the triggering effect of AMPK in the glucose absorption process. Collaborating with Laurie Goodyear’s team at Harvard’s Joslin Diabetes Center, Winder developed more evidence for the short-term effects of AMPK. Then he wanted to see if activating the enzyme could have long-term positive effects. His recent experiments show that it does. Repeated activation of the enzyme over a five-day period results in long-term increases in the transporter proteins. Rats that received repeated injections of the enzyme-triggering drug, AICAR, had higher counts of transporters even after the drug’s initial effects wore off.This means that drugs that activate AMPK could mimic some of the long-term beneficial effects of exercise for diabetics. It also brings to mind the tempting but counterintuitive prospect of losing weight without exercising. In fact, Winder’s work could possibly lead to a drug to treat obesity, because he has found that AMPK stimulates fat burning at the same time it triggers glucose absorption.
He emphasizes, however, that a good, old-fashioned workout will still be better in the long run. First of all, artificial activation of AMPK doesn’t increase the metabolism like exercise does. Also, when muscles contract they use glucose they have stored away in a form called glycogen. Triggering AMPK with a drug causes the transporters to bring more glucose into the muscle, but it doesn’t use up the glycogen that’s already there, so there might not be room for new glucose. Researchers will have to figure out a way to artificially deplete glycogen as part of their effort to find a drug for type II diabetics. “It is possible that activating the AMPK system with drugs may prove useful for treatment of obesity and in stimulating glucose uptake in those who are unable to exercise,” Winder says. “But exercise will always be a better solution for the rest of us. There is already good evidence that those who exercise regularly are less apt to develop type II diabetes.”Winder plans to test different compounds for their effects on AMPK in an effort to find a drug that can activate the fat-burning and glucose uptake processes in humans. He is also collaborating with East Carolina’s Dohm to determine exactly how AMPK signals the gene that makes GLUT4 transporter proteins. Winder’s coauthors on his recent study, which was published in the November 1999 issue of the Journal of Applied Physiology, are Burton Holmes and Emily Kurth-Kraczek, both BYU graduate students in zoology. The BYU research into the effects of AMPK is funded by a five-year, $750,000 grant from the National Institute of Arthritis and Musculoskeletal and Skin Diseases, a part of the National Institutes of Health (NIH).As Winder concludes the third year of the grant period, he is guardedly optimistic about the achievements of his team so far.“One always hopes that work funded by the NIH will yield something that will benefit the people paying the bill,” he says, referring to the taxpayer-supported nature of the NIH. “It’s really quite gratifying to see our work go in this direction, where it might be applied to the treatment of diabetes.”

A Step in the Right Direction