Once a Cougar, Always a Cougar 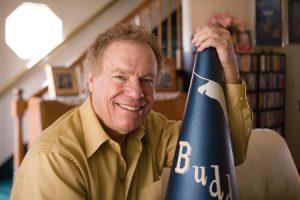 From roles as a BYU yell leader to Cosmo to a teacher and director in theater, Buddy Youngreen has made a career of Entertaining others.

As the head yell leader at BYU during the 1960–61 school year, Buddy Youngreen (BS ’64) felt comfortable at center court promoting school spirit. He was again at the core of campus life a year later, but this time few knew it. He had become Cosmo, the school mascot who attended sporting events, pep rallies, and parades in a furry cougar costume, and he was forbidden to reveal his identity until the end of the sports season.“I was more popular the previous year because as head yell leader I could be seen, heard, and adored,” he laughs. “As Cosmo I couldn’t talk, because my voice might make me recognizable. I used nonverbal ‘talking’ skills, though, such as using old Boy Scout codes and making alphabet letters with my hands.”
More than 45 years later he still remembers students pulling his tail and acting as if they were the first ones to think of it, and he says he has never been so hot as he was in the portable sauna bath that was his Cosmo suit. “I perspired so much I was dehydrated all the time.”
Still, he has many positive memories of his time in the cougar suit. One particularly fond memory took place off the court. “During a basketball intermission, I was taking a break in a coach’s office and his little daughter walked in. She stopped in her tracks and said, ‘Posmo.’ She then proceeded to sit on my lap and talk and talk and talk. Suddenly, she got this real worried look on her face and said, ‘Posmo, you aren’t going to eat me, are you?’ I shook my head, and she proceeded to gab. I was charmed.”
A good sport, he agreed to be at the center of a bungee cord–like catapult—“terrifying and ultimately quite fun,” he recalls. He experienced a career high when he made a half-court basket using his “paws,” and both teams said they wanted him to join them.
While Youngreen was happy to be Cosmo, he was also eager to finally graduate and begin a fitting career in dramatic arts. He put himself through school doing children’s theater and made a contact at the University of Utah that led to a teaching post at the Pasadena Playhouse in California. He returned to Utah in 1970, started the Sundance Summer Theater, and directed plays throughout Utah and Salt Lake Valleys.
A desire to write a play or movie script about Joseph Smith ignited a passion he has pursued for the past 35 years. Youngreen traveled to several states to interview Smith descendants and realized that the relatives of Joseph and his brothers Hyrum and Samuel didn’t know each other. He wanted to pull them together, so he prepared a Smith family reunion that took place in Nauvoo, Ill., in 1972. About 350 descendents came, and it began a tradition of gatherings every other year since.
“I was ‘adopted’ by the Smiths and became their chief officer for reunions,” he explains. “I found them incredibly fulfilling, especially after the Nauvoo Temple was rebuilt and we could all sense how the temple dominated the landscape and the culture.”
His home in Orem has been filled with files documenting the history of Joseph and Emma Smith, and he has had access to many diaries and journals from the Smith family. His writings include three books and several articles about Joseph and Emma’s life. About four years ago he dontated most of his materials to the Church of Jesus Christ.
“I guess I was a dramatist by profession and a Church historian by avocation,” he says. “I love them both.”
Youngreen retired from the Smith family reunions a year ago, but he is far from retiring. Youngreen is planning his high school’s 50th class reunion, and he directs Church history tours and gives Church lectures as a guest on cruises and trips abroad.
Still energetic, he is happy to say he still fits into his original yell leader sweater.