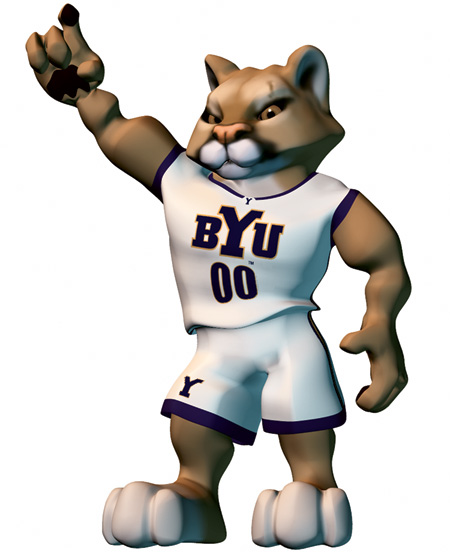 This new animated Cosmo, created by Casey K. Woolley, ’05, was designed for use in the BYU Bookstore.

BYU’s mascot was showing signs of age as he was pushed out onto the Marriott Center basketball court in a wheelchair for the Feb. 21 BYU–New Mexico game. But if he needed any help working the game that night, he had plenty of backup: in single file behind him followed 30 former Cosmos who had gathered to celebrate the mascot’s 50th birthday.

A reunion banquet held earlier attracted dozens who had worn the suit since 1954. Former Cosmos reminisced about their days behind the mask, sharing stories of athleticism, antics, and injuries.

Speaking at the banquet, Christopher D. Dowling, ’71, event emcee and Cosmo from 1970 to 1971, relived a wild motorcycle ride across the football field after the accelerator stuck open on his Harley. “I’m going down the field in front of the student section and I’m picking up speed. The crowd is going crazy, cheering me on—I didn’t think to turn the key or use the brakes. At the end of the 100 yards, I’m going about 50.

“Back in those days there were no ends to the stadium. Fortunately for me, there were some standards with ropes that went across the ends. I didn’t even see it, but I hit that rope and it reminded me of an airplane with a hook coming down on an aircraft carrier,” he recalled. “As I tumbled off the motorcycle, 30,000 people said, ‘Oooh’ in unison.

“I looked at the stands and everybody is looking at me. I felt like I’d sprained my entire body. So I’m hurting, but I’m Cosmo. So I stand up and throw my arms into the air so the crowd would know I’d be okay.”

Buddy Youngreen, ’64, Cosmo in 1961–62, said one of his memorable moments was being suspended on a bungee cord stretched between the two basketball rims on the main playing floor of the Smith Fieldhouse. “You had a painted smile on your face so everyone thought you were having fun, but I was terrified. Back and forth. Back and forth. Up and down. It was awesome once you got used to the g-forces.”

Being Cosmo has become more complex over the years. Before the mascot’s “cosmotic surgery” in 1998, Cosmo’s biggest stunts were the halfcourt shot and riding a unicycle. The old suit offered limited visibility and mobility, but with his new face in place, Cosmo has kept pace with other college and professional mascots. 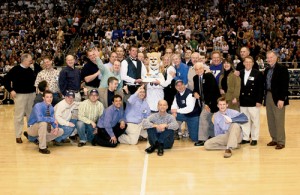 A halftime presentation on Feb. 21 in the Marriott Center celebrated the 50th birthday of BYU’s mascot and gave more than 30 Cosmos a chance to publicly take the cake in front of an appreciative crowd. Photo by Annie Jones.

“The crowd consistently wants to see crazier things,” says Richard C. Summers, ’04, Cosmo for the past three years. “They want to see you fall from the Marriott Center ceiling, slam, land on a mat, and be okay. We do put on a smile at the end. In my three years of doing this, I’ve ripped the ligament in my thumb, suffered a concussion, had whiplash, injured my right shoulder, hyperextended a knee, and rolled two ankles. But nobody’s complaining. I do love it.”

The modern Cosmo has a bevy of cool accessories, including the “Cosmobile,” a trailer with a music system, a go-kart, an e-bike, and other toys. But, according to Summers, he also has a demanding schedule. “We do about 130 appearances a year. It’s an overwhelming number for one, so two or three of us share the load.”

Daniel T. Gallego, ’62, now deceased, was the original Cosmo back in 1954. According to his successor, M. Ray Pope, ’58, “His vision was to have a high-quality tradition, based on sportsmanship and fair play, that would carry on after we were all gone. I think he would be proud to know that 50 years later, the tradition still goes on.”

“Why would anybody want to be Cosmo?” asks Summers. “More than 40 of us know why we want to put on that sweaty mask, not be able to see, run around in the sun for four hours in a 120-degree suit, not be able to breathe, and have a massive headache after the game. It’s that silent glory that we love—awing the audiences and making those small children smile.”

A Tale of Two Cosmos

Who is behind the mask? Read about Peggy Heron and her experience being unmasked as the first female Cosmo.

Lightening the Y: The Cosmo in Cosmopolitan

A comic that puts the "Cosmo" in cosmopolitan.