The former secretary of state speaks out on education and shares optimism. 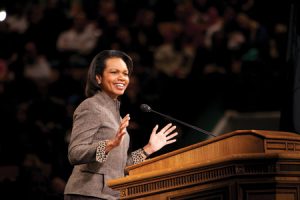 The American dream must stay a reality, Condoleezza Rice told her audience of nearly 18,000. Education, she said, keeps the dream alive.

Decades ago, a young Condoleezza Rice and her family couldn’t eat in most restaurants in their Alabama hometown due to segregation. In a forum held in the Marriott Center Jan. 13, she addressed nearly 18,000 as the former national security advisor and former secretary of state. “It doesn’t matter where you come from,” Rice told her audience. “It matters where you’re going.”

She told the story of her grandfather John Wesley Rice Sr., a poor sharecropper—not from Utah but Eutaw, Ala.—who saved enough to attend one year of college. When the year was up, he found out that he could continue on scholarship—but only if he trained to become a Presbyterian minister. “My family has been Presbyterian and college educated ever since,” said Rice with a smile. “He knew something about the transformative power of education, . . . [that] it was going to transform his family for generations.” After graduating, her grandfather went on to build “a church and a school next door” wherever he went throughout his life.

“But I ask you,” she continued, “in a country where I can look at your zip code and tell whether you are going to get an education, can I say to the John Wesley Rices of today, ‘It doesn’t matter where you came from, it matters where you’re going’?”

In fact, while she expounded on challenges such as rebuilding the economy and defending democracy throughout the world, the state of public education is Rice’s greatest concern. “I would go so far as to say that, with all of the other challenges we face, . . . our greatest national security threat might just be the disastrous state of our K–12 system.” The declining quality of America’s schools, she noted, is making the American dream less accessible to the rising generation. “Our very social fabric as a people is around that idea that you can come from humble circumstances and do great things. . . . That’s why we have to make certain that it is true for every child.”

In her address, Rice also encouraged BYU students to challenge themselves: “If you love to write, take more math. If you love math, write more.” She advised students to find something to be passionate about, to study abroad, to learn languages, and to remain optimistic. “As educated people, you have the right to be optimistic,” Rice said. “If you can’t be optimistic given all the opportunities you have, then who can be?”

More specifically, she admonished BYU students to be grateful for their unique learning environment. “You are fortunate that you are in a place here at Brigham Young [University] that believes that faith and reason go together, that does not see your intellect and your faith as enemies of one another but sees them as integrally integrated into who you are,” she said. “The essence of being human [is] to integrate your knowledge of what is with your belief in what might be. And so take advantage of this place of faith and reason to do precisely that as a bulwark against a world that too easily dismisses the role of faith in our society and in our world.”

What's it like to be Black on an overwhelmingly White campus? Black members of the BYU community share their stories.

Susan Easton Black’s passion for Church history gave her a field of study.