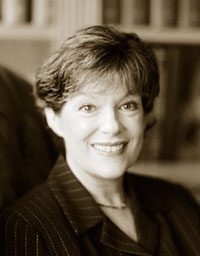 Susan Easton Black’s passion for Church history gave her a field of study. Her energy and enthusiasm turned her into a popular writer, speaker, and professor.

Harvey Black jokes that the only thing that comes between him and his wife is her writing. And there is a lot of that. He also says that, though she wouldn’t believe him, he enjoys the traveling. There’s a lot of that, too.

When you’re married to Susan Easton Black, there’s a lot of most everything. Definitely a lot of writing and traveling. There are also a lot of research projects and church talks, book signings and evening walks. That’s another thing Harvey likes–walking. Every evening Susan and Harvey walk together and talk about the day. He likes the traveling and the walking because it gives them time to be together. And time to breathe.

A prolific writer, popular speaker, and preferred professor, Susan Easton Black doesn’t slow down much. You seldom find her in front of the TV, but you’ll often catch her doing two things at once. “She’s got all kinds of other wonderful virtues, but waiting patiently is not one of them,” Harvey chuckles. “She does not do that one.”

What she does do is well known. For example, if you sit down at a random table in the Cougareat and mention her name, more often than not you’ll be greeted with nods of recognition.

“Smartest woman alive,” declares Landon Blatter. A junior from Livingston, Mont., Blatter organized a fireside once with Black as the speaker. “She was just rattling off facts like nothing.”

One of Blatter’s companions at the table, junior Heather Ford from Cody, Wyo., is also filled with praise: “As a woman, she’s a remarkable role model for me.”

Funny thing about Blatter and Ford–neither have had a class from Black, who, in 1980, became BYU’s first female professor of religious education.

That’s the way it goes with Black; her reputation precedes her . . . by a long way. Her classes (held in large rooms) fill quickly. Her name conjures several scrolling screens of titles on the library catalog. Her voice is heard regularly in BYU buildings with names like Joseph Smith and Ezra Taft Benson. Her face appears on fliers pinned to Church bulletin boards nationwide. Put simply, she’s ubiquitous.

Her husband’s ubiquity is more subtle, but he’s often there–sitting in the audience, driving the car, reading the first draft. A retired BYU professor of instructional science, Harvey is Susan’s cheerleader, a role they both consider vital. “Harvey just supports her–lets her go running,” says Milton V. Backman Jr., a mutual friend and professor emeritus of religion. “A wonderful couple, really. Harvey was good for her.”

And Susan was good for Harvey, whose first wife died of cancer 15 years ago. Now together Susan and Harvey keep busy at BYU and around the country.

“There’s a lot of Know Your Religion talks, and this time of year is the annual celebration of Relief Society,” said Harvey in March. “She calls it ‘Happy Birthday, Relief Society.'”

For a month or so each year, Susan celebrates the birthday of the LDS women’s organization almost every day, speaking to gatherings large and small. Such was the case one March evening in the Wilkinson Student Center where abundant pink hearts adorned the walls and 43 young women filled white plastic chairs. There was a song, a prayer, a song, an introduction, and the race began–less than an hour, Susan Easton Black, and the entire history of the Relief Society.

“I have to admit,” reflects Black on her teaching style, “because I am constantly reading and writing, sometimes I come to class and I go, ‘Here’s my dump truck of things I want you to know.’ And you’re going, ‘Just one piece, please.’ And I’m like, ‘No way–you paid the tuition, and you’re getting it all!'”

So it goes in classes and firesides alike–a steady stream of facts and quips and stories and quotes, all from memory. The Relief Society presentation in the Wilkinson Center was no different, and halfway through she stopped to ask, “Are you still with me?” Without waiting for an answer, she was right back at it.

“She just has a passion for the gospel and in a very special way for Joseph Smith and for all of that era of the Church’s history,” says Harvey. “She just loves it, and I think that comes across to her students. She brings it to life. She’s a great storyteller.”

Stories are perhaps her hallmark, and she tells them as if she had been there.

“To be invited to an Eliza R. Snow quilting bee meant as a woman you had arrived; socially you were there,” Black told the young women in the Wilkinson Center, while a portrait of Eliza R. Snow stared forward from the back of the room. “And to turn down an invite–oh, it was just not done. Okay, why go? Let me just share one incident from one of them.

“On one of these occasions, Eliza R. Snow had invited a young woman named Rachel Ivins Grant. She had a young baby named Heber J. Grant. She took the baby with her to the quilting bee–he’s about 2–and he gets off her lap and suddenly he’s bobbing his head up and down underneath the quilting frame. Suddenly stitches are being thrown and Eliza is beside herself. She then grabs the baby out, she looks in his eyes, and suddenly she speaks in tongues. As she does so, a woman there, who is Eliza’s best friend, her name is Zina Young–and Zina Young then stops and interprets what Eliza has said, and she says to Rachel, ‘If you can just but teach your son to be a good son, he’ll yet be an apostle.’ And then they just picked up their stitches and went on.”

Black’s passion for Church history began when she was a child named Susan Lindsay Ward. “When I was a kid growing up, my grandmother lived with us,” she recalls, “and one of her things was to make sure that I went to bed at night. So she would tell me stories. I wanted to hear Snow White and Cinderella, but she’d always say, ‘I can only tell you something that’s true.’ And so she would tell me the stories of Joseph Smith and the pioneers.

“  Grandma Lindsay knew those stories well. Born in 1872 to English immigrants, she grew up in pioneer Utah, and she passed the stories on to her daughter’s daughter night after night. “When she died, just as I was leaving high school, I thought, ‘Well, okay. That’s it. There isn’t anybody that can tell it like Grandma.'”

But at BYU Susan took a class from Backman. “He took over for me where my grandmother had been,” she says, “only he could tell me where in the library I could document it.”

Grandma’s stories and Backman’s class created a Church history fanatic. Her favorite subject? “Joseph Smith,” she responds without hesitation. “It amazes me how from the time he was a young boy he faces all this huge persecution, but he never loses his sense of integrity.” Black’s love for Joseph Smith is apparent in her family activities–each year on Dec. 23 they hold a birthday party for the Prophet.

In recent years, however, Black’s focus has shifted. As she told Harvey, “I feel like in the next life, I will know and recognize Joseph, but will I know and recognize Jesus?” So she began delving into the life of Christ with new emphasis, producing two soon-to-be-released books on the Savior.

Black’s road to scholarly productivity was a bit circuitous. When she graduated from BYU, she became a public school teacher but soon traded her teaching certificate for full-time motherhood. When her first marriage ended, Susan found herself unexpectedly in the job market, and for 14 years she was a single parent–scraping up random jobs, returning to school, building a career as a professor. It was a tough road, she recalls, and as she speaks of it years later, those days seem very real to her still.

“Before, I used to know all the answers. And all of a sudden, life becomes very important. Each day needs to be a good day. Like Elder Nelson says, ‘Joy in the morning.’ Every day I wake up, and I have joy. And boy is that person in trouble that takes it away!” she laughs. “You have to choose to be happy. And so I learned a whole bunch about happiness.”

And, she says, out of the deal she got three great sons and later a new husband with five children of his own. “She’s a very devoted mother,” says Harvey. “There’s no question about what comes first.”

Prioritizing–not balancing –is how Susan manages herself, says Harvey, and family and friends are among her highest priorities. “There’s only two of us here,” he says, “but there’s always at least 12 people here to dinner.”

The lone Ward sibling living in Utah, Black is frequently host to the children of her four brothers and to anyone else who happens to be around. “We very seldom eat alone–like Joseph Smith,” she says. “One time Emma was chided because they thought she could handle finances of her household better. Joseph always had people over to eat, and they said, ‘What Joseph needs is a table that seats one, and then you wouldn’t have all this household expense.’ And they used the example that Napoleon Bonaparte always had a table that seated just one. And she said, ‘Oh, Joseph can never eat without his friends.’ And basically that’s how it is for my husband and I.”

Such are the stories Black tells a couple of times a week to local audiences and a couple of times a month to distant groups. And she writes the stories often in books and articles for both casual and scholarly readers; her resume includes some 70 articles and more than 20 book titles (80 volumes), with several more awaiting publication. Most of that work has been completed in the last decade.

Susan attributes much of her energy to, of course, her ancestry. “Women in my family line live long,” she says. “My mother’s 92, wears 3-inch heels, just clips right along. We always say, ‘If the women in our line are going to die, you have to take their heart out and beat it.'”