By Charlene Renberg Winters ’73 in the Summer 2003 Issue 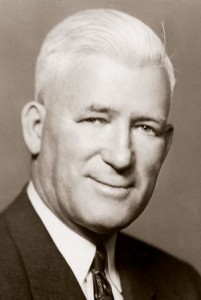 Recognizing that we never stand still, a post-war president brought fresh ideas, spiritual strength, and big plans to help BYU go forward.WHEN Howard S. McDonald took the helm as BYU‘s sixth president in 1945, his was not the only new face on campus. Veterans returning to school after World War II streamed through BYU‘s entrance, and a student body that had numbered a little more than 1,500 in 1945 exploded to 5,400 by 1947. It is not surprising, then, that the highest priorities in the McDonald administration quickly became housing and facilities. The Salt Lake Tribune wrote an editorial suggesting he was the right man for such challenges and characterized the 51-year-old as “old enough to have well-rounded experience” yet “young enough to have the vigor and drive which will help in the leadership of a large and growing institution.”McDonald, who will be the honored founder during Homecoming 2003, used that vigor to find housing for students, many of whom were sleeping in basement storage rooms, converted coal bins, and other inadequate quarters. He arranged for military surplus structures to be purchased and transported from the Ogden (Utah) Arsenal to provide temporary student housing and to meet other campus needs.McDonald then pushed for the construction of many permanent buildings that would help BYU become a great university. He advocated a science center, improved sports facilities, more dormitories, and a library, plus buildings for fine arts, a student union, administration, family life, education, and business. With post-war inflation, most of those dreams would have to be accomplished by a later administration, but the Carl F. Eyring Physical Science Building was approved, and when it was completed, it practically doubled the building space on campus.As critical as these building needs were, however, they were not the primary concerns for the board of trustees when they selected McDonald as president. The board hoped that, as a faithful person and a former stake president, McDonald would strengthen the spiritual nature of BYU. In his inaugural charge to President McDonald, President J. Reuben Clark, then in the First Presidency of the Church of Jesus Christ, asserted the school’s role to provide more than a secular education: “We look confidently forward to an increased spirituality in this school, for spiritually we move onward or we recede; we never stand still. We must go forward every day, becoming a little stronger, a little more certain, a little nearer perfection.”It was a charge McDonald took seriously, and during his tenure he established the Honor Code and petitioned Church leadership to create student congregations on campus. By the time he left the presidency in 1949, BYU had two student branches. He also gave attention to student social activities and other aspects of student life beyond academics. For instance, he established a modern method of caring for students’ health needs, and the school’s first health center was later named after him.As it had been for his predecessors, the question of BYU‘s continued existence was a real issue for McDonald. In President Clark’s first interview with McDonald, Clark mentioned that the First Presidency was pondering whether BYU‘s existence was justified, and he asked McDonald to consider the issue. McDonald’s later recommendation of continuance for BYU resolved the question for the last time.Following four years at BYU, McDonald left to take a position as the president of the combined Los Angeles City College and Los Angeles State College of Applied Arts and Sciences.His legacy was summarized by Carl F. Eyring, ’12, dean of the College of Arts and Sciences, at McDonald’s official farewell: “You have given of yourself without stint. The results are on record in the form of brick, wood, and stone, increased staff and salaries, improved scholarship, better counseling, more interest in the Gospel of Jesus Christ, and in general, more abundant living. There is also a record in our hearts which no one can gainsay.”