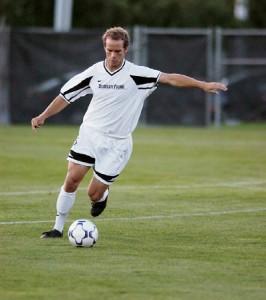 The PDL will give Chad Oyler and other Cougars better competition and exposure.

BYU men’s soccer booted its club status as the team officially announced its plans to join the Premier Development League (PDL). BYU becomes the first college soccer program to participate in thePDL, which is comparable to a single A baseball league. The idea for climbing the soccer pyramid came from head coach Christopher N. Watkins, ’98. “We would leave a game feeling good, but we knew there was more out there. I knew our players deserved more,” he says. “I was racking my brain for my first five years at BYU, and then it just hit me.” Playing in the PDL significantly increases the competition and challenge to athletes, which is exactly what the Cougars want. In the past 10 years, the men’s soccer team has dominated the club scene, winning six national championships and racking up 30 consecutive victories during one stretch. “We felt the need to move to a higher quality of competition in order to create a challenging environment for the players to develop,” says Lee Gibbons,’75, from extramural sports relations. In fact, the Cougars’ winning ways were so well known at the club level, the team had difficulty scheduling matches with other competitive teams. Joining this semi-professional league has scored with the athletes, who will maintain their amateur status. In addition to nonleague international teams, BYU‘s opponents will be similar to all-star teams consisting of college students from around the country. Defender Chad R. Oyler, ’04, dreams of playing soccer professionally. “This gives me exposure to the professional teams,” he says. “Playing at the club level just didn’t allow me to showcase my talent to the people who needed to see it.” In April the Cougars will lace up their cleats in Monterrey, Mexico, for two exhibition games. The regular season begins at home against Nevada on May 2.

The hottest ticket in Provo in 2012 was to BYU women’s soccer hosting their own elite eight match.

Participating in high school sports pays off in more ways than you might think.