A hush fell over the audience as Rendol L. Gibbons, ’64, stepped forward. The World War II veteran stood erect. Lifting a trumpet to his lips, he filled the air with soft taps: ta-ta-tum. As the notes faded, most eyes in the room were wet. 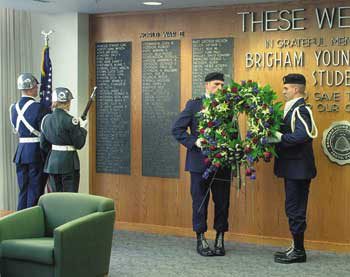 At the Memorial Hall rededication ceremony, held Nov. 7, 2000, ROTC cadets honored the 207 BYU students and alumni who died in the war. BYU’s Memorial Hall has been relocated to the east side of the Wilkinson Student Center.

Solemn respect marked the BYU Memorial Hall rededication ceremony on Nov. 7, 2000. Held in the Wilkinson Center Ballroom, the ceremony honored BYU students and alumni who gave their lives in service to their country.Keynote speaker Lieutenant General Bruce Carlson reminded the audience of their duty to remember these soldiers. “We must remember their ultimate sacrifice,” he urged. “Whether we tell their stories, write them down, or create a memorial, there must be a lasting impression for future generations.”BYU‘s original Memorial Lounge was built as an addition to the Wilkinson Student Center in 1967. Memorial plaques, etched with names, were hung to pay tribute to the 207 BYU students and alumni who died in war. During recent renovations the plaques were moved to a new room adjacent to the Wilkinson Center’s East Ballroom. In the new Memorial Hall, windows offer visitors a view of Y Mountain, and couches invite students to meditate and study.Throughout the rededication ceremony the audience, which included three dozen veterans and some 300 ROTC cadets, wept and laughed as the fallen soldiers were remembered with stories and songs. The Air Force ROTCHonor Guard reverently placed a single dinner setting as a symbol of those who will always be absent from their families’ tables.At the conclusion of the ceremony BYU honored Elder Hartman Rector Jr., an emeritus member of the LDS Church’s First Quorum of the Seventy and a Korean War veteran, with the ROTC Patriots’ Award, given every other year to an individual who exemplifies selfless service and devotion to America.

With trillions of inhabitants, your gut microbiome affects your health in more ways than scientists ever imagined.

The greatest work for this portrait photographer is recording the lives of refugees.

His Grace Is Sufficient

Brad Wilcox’s sermon on grace may be the most popular devotional the magazine has published.