Lying Down on the Job

BYU exercise physiology students Gavin and Marcus Pope will be the first to say they had a cushy summer job. The identical twins were each paid $100 a day to spend a month in bed as part of a NASA study on exercise and weightlessness. 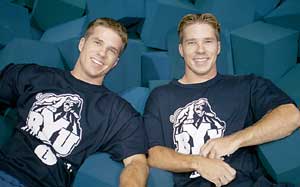 BYU gymnasts Gavin (right) and Marcus (left) Pope spent a month lying down this summer for a NASA study.

“Surprisingly, we didn’t get bored at all just lying there. We kept pretty busy, and at the end felt like it was worthwhile,” says Marcus, adding that working daily with researchers proved to be a real learning experience. “It almost felt like an internship, we learned so much.”The 36-day study required the twins to lie with their heads pointed toward the ground at a 6 degree angle to simulate how astronauts feel in space. NASA is conducting the research to determine the effect that extra-terrestrial exercise–or the lack thereof–may have on the body’s muscle tissue, bone density, and internal fluids.Researchers put the twins, both BYU gymnasts, through three days of pretesting to determine their initial fitness level. Then a coin toss determined that Marcus would exercise six days a week during the experiment, while Gavin remained in bed. At the end of the study the two were submitted to three days of additional testing, in which the bedridden Gavin was consistently outperformed by his more active brother.

Microscopic air particles that may hold clues about the relationship between air pollution and disease.

BYU professor leads on the effort to restore the Provo River.