GERALD N. Lund thinks grandly, sweepingly, comprehensively, and dispensationally. Latter-day Saint readers have expressed their appreciation for Lund’s literary rendering of the Restoration by purchasing nearly 3 million copies of his nine-volume epic, The Work and the Glory. Now that gratitude is about to increase exponentially as Brother Lund chronicles the dispensation of the mortal ministry of the Lord Jesus Christ, in The Kingdom and the Crown series. Volume 1, Fishers of Men (Salt Lake City: Shadow Mountain, 2000; 642 pp.; $26.95), begins in the fall of a.d. 29 with a rousing prologue featuring a confrontation between the troops of Roman tribune Marcus Quadratus Didius and the family of David ben Joseph of Capernaum.

Fishers of Men peers over the shoulders of members of two Jewish families as they learn about upstart John the Baptist, preaching that the Messiah has come, and about Jesus of Nazareth, regarding whom the family members disagree, though they sooner or later come to accept Him. With Miriam, daughter of Mordechai ben Uzziel, we watch Jesus drive the moneychangers from the temple (tenderly sparing the caged doves); with David, we witness Jesus calling fishermen to become “fishers of men.” We listen to Peter recount for David the water-into-wine miracle at Cana and Jesus’ commanding the waves to “be still.” We are on hand to hear Jesus say, “This day is this scripture fulfilled in your ears,” to witness several of Jesus’ indisputable healings, to listen to the Sermon on the Mount, and to wonder as David introduces Jesus to Centurion Sextus Rubius, the family’s erstwhile enemy, who humbly asks the Master to heal his servant by speaking the word. We stand with Miriam and watch Jesus confront the scheming Pharisees and tell the woman taken in adultery to “Go your way—and sin no more” (p. 409). And it is in Simeon’s conversation with Mary that we learn the miraculous circumstances of Jesus’ birth and hear her testify that “My son is literally the Son of God.” 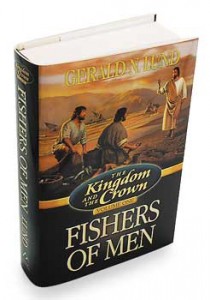 Fishers of Men takes us there, and it is fresh and powerful, as this grand and familiar story is newly refurbished by Lund’s cast of characters and by the excitement of intrigue and warfare among the Romans, the Zealots, and Ya’abin’s robbers—Palestine’s answer to the Gadianton robbers. Lund did graduate work in New Testament studies and Hebrew at Pepperdine and the University of Judaism, and it shows as he authoritatively tells his story against a background rich with the lore of Judaism. Every page sparkles with well-founded anthropology: we enjoy a tour of the temple built by Herod the Great; we are guests at a betrothal and a marriage in the Talmudic tradition; we live the daily lives of Jews at the time of Christ; we eat their food, practice their religion, wear their clothing, attend their feasts and celebrations, and reverence their history and traditions. In his masterful retelling of the Greatest Story Ever Told, Lund is, once again, our seasoned guide and incomparable teacher—and, as before, he provides chapter endnotes to cite his sources and distinguish research from well-founded imagination. This book is a feast. I urge you to partake.

Though historical, Sarah, unlike Fishers of Men, is not a historical novel. As his incisive afterword makes clear, Card has done his homework on Genesis and the culture and anthropology of ancient Canaan and Egypt, and he has given the book an authentic “feel.” But Card is a novelist, not a historian, and as such he undertakes to render the old story of Abraham, Sarah, Isaac, Hagar, and Ishmael imaginatively but “faithfully, trying to understand what truths are being shown to us by means of, or in spite of, the words used to tell the tale” (pp. 381–82), while allowing human nature and psychology to take their literary course.

Believing that Abram and Sarai “very probably did all the things, or almost all the things, attributed to them” in scripture (p. 382), Card lets us see from the point of view of a brilliant and sharp-witted Sarai how it was to keep up for an entire year the pretense of being Abram’s sister while diplomatically keeping a lusting Pharaoh at bay and her husband alive. We experience, with Sarai, the sustained despair at continuing barrenness amidst the unwavering faith of Abram in God’s promise to give them an heir; we agonize with her at her selfless decision to give Abram an heir through Hagar, selfishly weep with her when Abram accepts her decision, and share her fury when Hagar presumes on her new status as mother of Abram’s son. We rejoice with her when the miracle of conception occurs on the very night that the city of Gomorrah, and her shrewish sister-in-law, Qira, Lot’s wife, are destroyed in a meteor shower. And with her we are at once saddened and relieved as Abraham sends Hagar and Ishmael away from the camp after Ishmael has threatened the life of his baby half-brother.

Finally, we stand at a knowing, ironical distance as Sarah innocently bids farewell to her husband Abraham when he grimly leads their son Isaac on an unexplained trip into the wilderness, and we wince at her calm confidence that her husband and only son “would reach the place the Lord had commanded Abraham to go, just as they had reached every other place that was promised them” (p. 376). This novel delves into the truths of the human heart anchored in faith. In the manner that Thomas Mann’s Joseph and His Brothers enriches the story of Joseph, Scott Card’s Sarah masterfully and unforgettably opens for us the story of Abraham and Sarah. 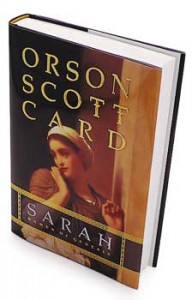 Dean Hughes concludes his Children of the Promise series with volume 5, As Long as I Have You (Salt Lake City: Deseret Book, 471 pp.; $22.95). In an afterword, Hughes confesses that “I will miss the Thomases. . . . They seem like friends—or family—with all the complexities of real human beings” (p. 468).

In fact, Hughes has made the Thomas family a part of all of his readers’ lives. A student in my fall semester 2000 Literature of the Latter-day Saints course confessed that she had peeked in the Salt Lake City telephone directory to see if the Alexander Thomas Sr. family was still listed. When she told me (straight-faced) that there was no listing, I told her (straight-faced) that I had heard that President Thomas passed away in 1994, and that his wife, Bea, was currently living with Richard and Bobbi in Bountiful. Then we laughed together at the power of fiction to make the imaginary real. We will all miss the Thomases, whose lives we have followed from 1938 through July 24, 1947, throughRumors of War, Since You Went Away, Far from Home, When We Meet Again, and last, As Long as I Have You.

Hughes has vividly and with amazing accuracy recalled World War II for those who lived through it—and made it real for those who didn’t. His cast of characters—President Thomas, Bea, Alex, Bobbi, Wally, Gene, LaRue, Beverly, the Stoltzes, and all the rest—are as real to us as Huck Finn, Hamlet, Anne (of Green Gables), or Sam, that kid from across the street that I used to play with. And we are all the richer for these new old friends.

Richard H. Cracroft is the Nan Osmond Grass Professor in English; he is also director of the Center for the Study of Christian Values in Literature at BYU, where he has taught since 1963. He currently serves as bishop of the BYU 203rd ward.

An Homage to Female Heroes

How many female greats can you name in this 40-foot mural done by Beatles album-cover artist Jann Haworth?

Geologist Wade Miller found fossils in Mexico that rewrite the history of the Panamanian Isthmus.

A beloved BYU landmark once again fulfills its original purpose.