Looking for the Old Home

An American student travels to China—land of her ancestors—and discovers her untold story. 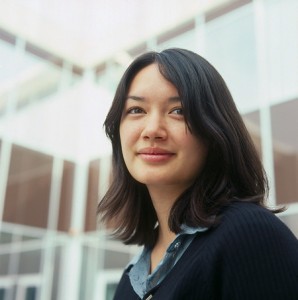 When Gloria Gong (’07) left for China with a BYU study abroad group in August 2005, she was searching for a story to tell. Little did she know it would be her own.

Originally,Gong, a Chinese major and film minor, planned to film a documentary about an American-adopted Chinese girl returning to her homeland and discovering her culture. But when her plans unraveled after she got to China, Gong had to improvise.

“I realized I could film something with the same themes if I filmed myself,” she says. “In some ways I was having the same experience that I was looking to see in this girl. I, myself, was coming back for the first time.”

Gong’s paternal ancestors come from a village near the city of Guangzhou, China. Although she had never before set foot on Chinese soil, she identified with the culture. But connecting with Chinese people still wasn’t easy. “It was really challenging to the sense of who you are,” she says. “People would come up and be really nice to my white friends who are learning Chinese, then they’d come up to me and think, ‘What’s wrong with you? Why don’t you speak Chinese?’”

During her semester abroad, Gong studied third-year Chinese and Chinese culture with other BYU students at Nanjing University. For her documentary she filmed her experience meeting people and immersing herself into her own culture. The climax of the film is her journey to her roots in Gong Village. In December, Gong’s parents joined her to return to the village. It took the Gongs an entire day to locate the village among the region’s sprawling towns and cities. Each place they stopped to ask directions, another guide would join them on their quest. By the time they reached Gong Village, they had an entourage following behind—from a vacationing businessman to Lok Chang city officials.

Through her camera lens, Gong captured the emotions of the day’s journey, from tears of frustration to tears of joy. When she stepped out of the taxi in Gong Village, Gong said she was unexpectedly touched.

“I would have grown up here,” she thought.

The village was just like the pictures her father had shown her: winding dirt paths, humble homes, fields of rice, and green pools where water buffalo used to live. 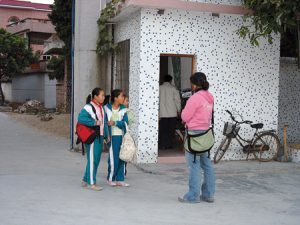 Camera in hand, Gong discovers what it might have been like to grow up in China. Photo Courtesy of Gloria Gong.

In 1899 Gong’s 14-year-old greatgrandfather sold his water buffalo to earn money to emigrate to California. To get out of the country, he obtained a false identity and his father paid a family in America to pretend they were his relatives. Almost 100 years later, Gloria Gong was born in Palo Alto, Calif., as an American citizen.

After her emotional journey, Gong decided to intertwine her great-grandfather’s story of finding his way to America with her story of finding her ancestral village. Appropriately, Gong’s film will be titled Zhao Laljia, meaning, “looking for the old home.” Gong plans to show the film at BYU and enter it in film festivals.

“I feel very lucky because this is an experience not many Americans get,” she says. “This is something we need. Among America’s strengths are a determination to do and go and progress and move forward. But because we are a nation of immigrants, a cost of those strengths is a sense of where you come from.”

A Life of the Stage

Behind the scenes or center stage, Jerry Elison has shaped Utah Valley theater for six decades.