With a 40-foot-long fiberglass bridge to install over Peteetneet Creek in Payson Canyon Park by the end of the afternoon, BYU civil and environmental engineering students Keith Steurer and Layne Jones were applying–and feeling–some pressure.“Whether this thing flies or dies is our responsibility,” said Jones, 24, pressing down hard on a drill that didn’t seem to want to bore through the bridge’s tough skin. “We’ve had to learn to roll with all the punches this project has thrown our way.” 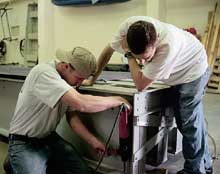 Installed last October, the wheelchair-friendly pedestrian bridge gives visitors to Payson Canyon Park access to both sides of the creek. It is believed to be the first bridge in Utah made completely of fiberglass. Officials from Payson City asked BYU’s student chapter of the American Society of Civil Engineers (ASCE) to build the structure as one of the chapter’s annual service projects. And while Payson picked up the tab for materials, Jones, a graduate student from Twin Falls, Idaho, and Steurer, a senior from Madison, Wis., were responsible for organizing BYU’s volunteer engineering force. One hundred and fifty students donated almost 900 service hours by designing, assembling, and installing the unique bridge.The students chose fiberglass as a building material for several reasons–it’s lighter than steel, extremely strong, and virtually maintenance free, says Steurer, 24. A Texas-based company that specializes in carbon fiber materials, Fibergrate Composite Structures, donated its time to build and ship the bridge’s parts to BYU. Students then assembled the pre-fabricated parts, dug and placed the bridge’s concrete footings in Payson Canyon, and installed the final product.Along the way the student volunteers learned important engineering principles, Steurer adds. “The biggest thing we’ve learned from this project is that there’s a big gap between design and practical application. Something may look good on paper, but it’s a whole other thing to put your plans into action.”According to W. Don Budge, retired professor of civil and environmental engineering, BYU civil engineering students have been carrying out similar projects for decades. “We’ve done lots of really fun things,” says Budge, who served as faculty advisor to the ASCE student chapter for 30 years. “Most projects we try to design, conceive, construct, and put in place in a year, so that the students get to see the whole thing completed.”In the last 15 years BYU student engineers have built park structures (including a pond, pavilions, barbecues, retaining walls, and picnic tables) for the cities of Highland and Springville, Utah, and for the Utah State Mental Hospital; a structure for measuring spring runoff from Provo’s Rock Canyon; a wheelchair-accessible fishing pier at Utah Lake State Park; and lots of bridges for local cities and the U.S. Forest Service. BYU-built bridges are in use at Payson Lake, Santaquin Canyon, Diamond Fork, Tibble Fork, several Provo parks, and now Payson Canyon. 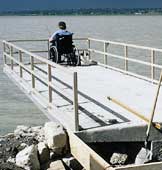 This wheelchair-accessible fishing pier at Utah Lake State Park was one of the service projects BYU engineering students completed in 1991.

Of course balsa wood is a far cry from steel and concrete, but the principle of learning by doing–and the idea of using skills to serve others–holds in BYU’s most sophisticated engineering courses. To guarantee a service component in the curriculum, the civil and environmental engineering department requires majors to enroll every semester in a seminar that includes five hours of service, at least three of which must be devoted to a department project.And there is no shortage of project options: as the students’ reputation has grown, so has demand for their work. “Every year we have more people asking for projects–more than we can do,” says M. Brett Borup, current advisor to the ASCE student chapter. In fact, the chapter has a national reputation for excellence. BYU has received the ASCE Ridgway Award, which recognizes the most outstanding student chapter among some 220 chapters in the nation, four times–in 1973, 1986, 1988, and 1990. During the 1990s four BYU civil engineering students have had their papers recognized as best in the nation. And in 1996 and 1997 the chapter received some of ASCE’s first Outstanding Community Service Awards.
Borup says the chapter’s elected student leaders typically oversee the annual service projects, and project leaders “spend probably hundreds of hours each time.” Steurer and Jones are a case in point–each spent more than 200 hours on the design and construction of their bridge in Payson Canyon Park.Budge believes that kind of sacrifice makes the projects into something more than hands-on engineering practice. “We believe that civil engineering is a people-serving profession,” he says, “and these projects are one way to teach our students to become people servers.”

Electrical engineering professor Aaron Hawkins' first chapter book is a slice out of his childhood.

A $10M Boost to Global Engineering and Technology