IT’S noon on Monday and clusters of students are gathering around a wooden box outside the Wilkinson Student Center. Suddenly a microphone squeals, and excitement ripples through the crowd. Soapbox, BYU‘s open-mike forum, has begun.Held in Brigham Square—between the Harold B. Lee Library and the Wilkinson Center—Soapbox runs for three hours every Monday. While it frequently starts out sparsely attended, the issues reverberating from atop the wooden box snare casual passersby, who often stop and linger. In one day the topic smorgasbord could include abortion, school spirit, world hunger, hairstyles, the death penalty, guy/girl problems, beards on campus, gun control, and elections. 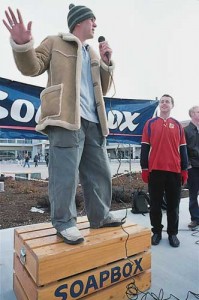 “Soapbox is the pulse of the student community,” points out Casey Adams, an economics major from Absecon, N.J. A self-declared Soapbox “junkie,” Adams recalls the time a student made a marriage proposal from the Soapbox.But Soapbox has not always enjoyed the popularity it does today. Begun in the late 1980s, it was almost discontinued due to lack of interest. Then in 1998 Jacob G. Ball became Soapbox’s program director.Ball, a global trade major from Boise, Idaho, believes lively debate among students is essential to the university’s mission. So he restructured the forum. Not long afterward Brian D. Henderson and Glen A. Rusche became involved as Soapbox mediators. “I love bringing ideas to the table to stir students’ thoughts,” says Henderson, an international studies major from Salt Lake City.Many students appreciate the dynamic conversation Soapbox creates. “The tendency is to think of BYU as a homogenous place,” says Sarah L. McDonald, a senior from Bothell, Wash. “Soapbox gives us the chance to show a diversity of opinions.”As Soapbox’s popularity mushroomed, Ball noticed that some students were getting up to entertain rather than to address substantive issues. So he came up with the student-hosted talk show Off the Record, which premiered in March 2000.The first show featured a monologue by Ball, two local musicians, and the BYUSA presidency—and it drew an audience of 700. Since then, the bimonthly show has spotlighted BYU sports teams, comedy troupes, local restaurant owners, and student bands.Students who watch or participate in the forums find they are entertained, uplifted, or challenged to see the world differently. And whether students prefer to catch a few minutes of Soapbox on a sunny day or to take a break from their studies at Off the Record, Ball believes each forum is making an impact on the BYU community.

The Harold B. Lee Library has made a home for the creative world of a Newbery-winning fantasy author.

Errands from the Lord

Insights into Joseph Smith, his “Beloved Emma,” and inspiring sermons from Elder Packer and Elder Holland.

Judging a Book by Its Cover