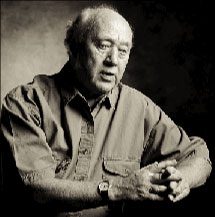 Leslie Norris has a Welsh accent. Not a strong one, but just enough to make you perk your ears to listen for the lilting rhythm and the flick of his rs. The accent makes a reading of his poetry especially endearing. Somehow the Welsh tongue wraps around the language with more character, more expression and life, than an American tongue would.

It is the same when he speaks to students in a classroom or gives a guest lecture. His language is rich and colorful, his syntax sometimes surprising, just like his poetry.

And his poetry is some of the best being written. Norris’ work has been published repeatedly in such prestigious literary forums as The Atlantic Monthly and The New Yorker. His poems and short stories have won international awards and been widely anthologized. He is the only writer to have been elected a fellow of both the Welsh Academy and England’s Royal Academy of Literature. And BYU students have been the receivers of his language and wisdom for 15 years now.

The perhaps-unlikely arrangement between the prominent Welsh-born poet and Brigham Young University seems to suit both quite nicely.

“I do feel at home here. People are so kind and supportive,” says Norris, Humanities Professor of Creative Writing and poet in residence. “And writing is a very solitary task; one gets restless and fed up. So I’ve always needed to teach. I’ve always needed the impetus and influence and energy of young minds, so it’s been a perfect combination for me.”

It is a combination that has worked for him for much of his professional life. He has taught every age, from young primary-school children to university students. He has been a classroom teacher, a headmaster, and a professor–a very good one, too. At BYU he has been named a Karl G. Maeser Distinguished Faculty Lecturer and received the Phi Kappa Phi Award.

But he has always thought himself a writer, and for the longest time he thought that everyone else was, too. The defining moment–when he knew that he was a poet and that a poet was something different from other people–came when he was a young man walking down Church Street in his hometown, Merthyr Tydfil, Wales. He touched a stone wall that lined the street. Bits of the wall tumbled to the ground. Bits lodged in his fingerprint. “Startled, he realizes / he has against his palm/ the bulk of the whole world,” wrote Norris of the experience (“A Grain of Sand,” Collected Poems [Bridgend, Wales: Seren Press, 1996], p. 218). Watching the stone crumble so slightly, he knew that if he was to be a poet he must know everything in the world–“the growth and decay of stone, /the age of mountains” (p. 218).

From that moment, he has called himself a poet of this world. He believes poetry has for its scope the entire world, the full range of human experience. “Writing is a totally human activity,” he says. “It is an activity of everything to do with a human being. Everything.”

Norris published his first volume of collected works at age 19 and then another at age 22. It was nothing more or less than he expected at such a young age.

Now 77, he was quite wrong on the second count. In seven decades of writing (having penned his first little verse at age seven), he has published some 30 books of poetry and stories, and his poems, stories, and critical works have been published in more than 200 periodicals, collections, and anthologies.

Norris has developed a very personal relationship with the poems he affixes his name to. Indeed, when he speaks of a poem and the writing process, he speaks in second person. “Oh, you are using an eight-syllable line and you are rhyming it in this way,” he says, as if he is meeting the poem for the first time, getting acquainted as it appears on the page.

Because a poem is something quite separate from him, a “living thing” to be introduced to and exchange pleasantries with, Norris says it’s no good to sit down and tell himself, “‘Today I will write a poem,’ because I would know that wouldn’t be a poem. I would know that it would look like one, I would know that some people might think it was one, but I would know that the necessary depth or mystery wasn’t there.”

Rather, he waits for the poem to come, like the flu. “If the poem is growing–and I’ve never gotten used to it–I really feel quite ill. I really feel as if I am sickening from influenza, and suddenly I remember what is happening–the poem is starting.”

Norris ignores it for as long as possible, and then, when he can no longer dismiss the pressure of an impending poem, he locks himself away and writes frantically. Bits of paper are strewn in piles across his desk; lines appear here and there, the ending in one stack, the middle in another, the beginning in front of him as he pours out images and words he knows the poem must have. “I have to work very hard and very quickly to get it all in my net,” he says. And he can’t leave until it is finished. Not perfected, but finished. He can’t get up until all the lines are there and he knows what the poem is to do. Then he can come back the next day and work out the particulars.

“And I know exactly where I have to modify and refine it,” Norris says. “For example, I nearly always take out the first stanza or two stanzas because those are the times I was feeling my way into the poem and it hadn’t really begun.”

At one time this scenario happened as often as six times in a day. Now poems come perhaps six times a year. So while Norris is waiting to meet the next poem, he sharpens his saw, refines his craft–practices, if you will. He calls it “prose.”

“Someone like me would find life very frustrating if I had to wait for poems all the time. We have to have our skills, our craftsman’s abilities, completely in control so we can do the very best by the mystery that’s given to us. The only way to keep and develop those skills is by writing. So I write short stories.”

He writes short stories that are anthologized and collected and given international awards. He received his most prestigious award, the 1981 Katherine Mansfield Triennial Award, for a story called “Waxwings.” The award is given for the short story that over a three-year period is thought to be the best in the English language.

His poetry receives no less acclaim. In 1996 he published Collected Poems and Collected Stories, sister volumes that chronicle more than a half-century of writing. Of the poems, one reviewer wrote, “The sense of well-wroughtness generated by these poems, . . . suggests that peaceable British lyric observation should endure forever as the quiet foundation of all English-language poetry” (Publishers Weekly, Aug. 26, 1996, p. 95).

How did a poet whose work is part of the enduring foundation of English poetry come to be a quiet, unassuming professor in BYU’s English Department?

Norris answers, “I don’t know why I came; I’m just glad I came.”

It actually began at the University of Washington when he taught a student who had a degree from BYU. Norris was terribly impressed with the pupil, and the relationship set in motion a string of events that led him to BYU as a visiting professor. He came in 1983 and really never left, eventually accepting a full-time post–the only permanent full-time position he has accepted in the United States. He and his wife, Kitty, shifted between Utah and England for several years, keeping homes in both places until three years ago, when they sold their English cottage.

Among the reasons for staying at BYU, Norris emphasizes the people. “We were welcomed and greeted and made much of and helped in every way. People were practically helpful; they made sure we knew where we were going and how to deal with the practicalities of living here, whereas in some schools at which I taught, everything was done in a perfectly businesslike way.”

The Norrises have also felt embraced by the community. He calls himself an honorary member of the local LDS ward and has allowed symbolism from the Bible, the Book of Mormon, and LDS ideology to creep into his work. “It is to be found in a lot of my late poems, which I would never have done without the combined influence of Rilke (a German poet whose works Norris translated with BYU German professor Alan F. Keele) and the influences of some of my friends in the LDS Church.”

Norris’ reciprocal influence on BYU students and faculty has been profound. His Welsh cadences and warm humor endear him to the thousands who have enrolled in his classes or attended readings of his work.

Reviewing a book about Norris, Richard H. Cracroft, professor of English at BYU, wrote, “I am compelled to remind you of the international treasure trove of storylore and poetry that we presently enjoy in Professor Norris. . . . Reading Leslie Norris’ crafting of mortality is a rich human and spiritual experience” (“Ordering Our Lives Through the Stories We Tell,” Brigham Young Magazine 48, No. 1 [February 1994], p. 60).

AARS provides gardeners with roses that are strong enough to bloom in their respective climates.

Thein has filled big shoes and has done plenty for BYUSA.