Learn Science, Save the World

Breaking news! Dust from a mysterious meteor shower has fallen, and all of the adults on earth have collapsed! Are they dead? Just unconscious? Will they ever wake up? Their only hope is teenage budding scientists. Can they solve the mystery?

Sponsored by a collaborative $2 million grant from the National Science Foundation, BYU professors and students have partnered with the University of Maryland and NASA to create alternate reality games designed to pique teenagers’ interest in science, technology, engineering, and math (STEM). Their first game, released in January, is called DUST, and more than 1,400 teens across the United States collaboratively played it through the beginning of March. 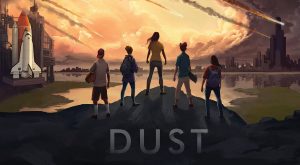 In DUST participants played as themselves, interacting with other players and 11 teenage characters controlled by BYU and University of Maryland students. To complete their mission, players researched the science, learning about microorganisms, brain anatomy, exoplanets, and many more topics. They used websites, apps, and social media to collect data and post stories, pictures, and their own theories while working together to solve problems and ultimately determine how to rescue the adults.

More than 40 BYU students from different disciplines—from computer science to physics to illustration—collaborated to make DUST. They were led by associate professor of information technology Derek L. Hansen (BA ’98), Laycock Center director Jeffrey A. Sheets (BA ’98), and associate professor of technology engineering education Steven L. Shumway (BS ’87). The BYU team also had help from middle school students in Provo and Washington, D.C. Glenn D. Lockwood (BS ’98), a science teacher at Provo’s Dixon Middle School, and a group of his students, including two of his daughters, wrote profiles and scripts for characters, gave app suggestions, proposed possible storylines, and tested an early version of the game.

The team hopes DUST will change players’ attitudes toward science—and especially attract females and minorities. Of the 11 characters in the game, seven are girls and most are from minority backgrounds. “This is a diverse world,” says Lockwood. “Science has no color, and science has no gender.”

The game’s storyline is fictional, but NASA collaborators worked to ground it all in fundamental scientific principles. William Cirillo, from the NASA Langley Research Center, led a group of interns who provided technical content for DUST. “You want to engage the students to use proper scientific methods, formulate hypotheses, collect data, and crunch results in order to . . . draw their own conclusions on what may or may not have taken place,” he says.

Adds Hansen, “[DUST] is trying to teach scientific inquiry. [It is] giving players the opportunity to feel what it’s like to be a scientist.” Hansen says he hopes this alternate reality game will help students think, “Well, maybe I do want to be a microbiologist.”

When History and Biology Collide

A revolutionary course explores the intellectual intersections of two disciplines.

The Harold B. Lee Library is about 50 percent larger than it was before.

Evolution on Display at BYU