Kay B. Franz: Opening the Doors of Science

By Carri P. Jenkins in the Summer 1997 Issue

Juliana Boerio-Goates, a BYU professor of chemistry, can still remember the day she picked up a copy of The Daily Universe and found herself reading a quote by a newly hired faculty member who said, in essence, “No one at BYU is working to help women.” 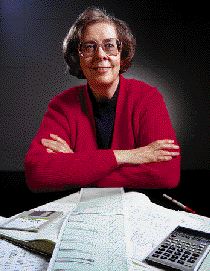 “My blood began to boil; she obviously had no idea what was going on at this university,” recalls Boerio-Goates. “Immediately, I wondered if she knew Kay Franz and was aware of her work, because if she did, she would never be making such a statement.”

Described as the backbone behind such programs as the BYU Women in Science Center and Utah’s Expanding Your Horizons Conferences, Franz is regarded as a dynamo. Her undying energy, colleagues say, can only be attributed to the fact that she’s a brilliant nutritionist who must have some secret concoction stored away.

“Kay is doing what a lot of us think is really important but, for one reason or another, just dip in and out of,” says Boerio-Goates. “But she has selflessly stuck with these programs and kept them from dying.”

Yet ironically, although she is the foundation for so many excellent programs, Franz rarely puts herself on center stage when it comes to women’s issues. A quiet woman–who agreed to this article only if it would help raise the awareness of BYU’s Women in Science program, which she helped found in 1985–she considers herself a “behind the scenes” person. Or, as one of her students says, “She’s the opposite of ‘in your face,’ whatever that would be.”

But don’t misjudge this humility for lack of vision or determination, says Mark Rowe, chair of the Food Science and Nutrition Department. “With Kay, you don’t see a whirlwind going by, but that’s exactly what has happened. I honestly do not believe that anyone at this university can equal Kay in terms of citizenship.”

Fully aware that citizenship points have not always stacked up in quite the same way publications and grants have, Franz has still given much of her time to students.

An aggressive, competent scientist, she did trace mineral work at Berkeley while completing her doctorate. She is still so devoted to her research, where she is investigating the physiological responses of chronic magnesium deficiency, that one of her former students, Missy Bankhead, says, “You know, she really loves magnesium; she thinks magnesium will solve the world’s problems.”

Yet despite this passion, Kay has sacrificed time in her lab for what she calls a higher purpose: “Helping students recognize and achieve their own unique missions.”

She doesn’t limit her efforts to women but does believe that because of pressure from society or lack of confidence or lack of skills, women–more than men–have not been able to pursue their dreams, particularly when the first step involves a trigonometry class.

Surprisingly, Franz isn’t speaking from experience. A product of the 1950s, the professor grew up in a world hardly depicted on the TV sitcoms of her day. “My father was a mining engineer, and my mother was a home economics teacher,” she explains. “The girls I grew up with in the Berkeley area all went to college, and we all graduated. In high school, all the teachers for the advanced math classes were women. All around me, I saw noted and respected women. Even my physician’s sister was a medical doctor.”

Even so, she says, “you notice that I didn’t consider following my father into engineering. Do you know why? Because I didn’t have a woman role model. I saw women doing great things in the areas of biology, but I never knew a woman engineer when I was growing up.

“Without the role models, without their encouragement, it just doesn’t happen.”

It’s as Lillie Weaver, a senior in food science and nutrition who “survived” Franz’s 435 Nutritional Biochem class, says, “I don’t know if it’s just me, but it’s easier for me to talk to females. I don’t know why.”

Such an observation would lead most people to despair. After all, the ranks of professional women in such fields as computer science and engineering are low, but they drop even further when it comes to the faculty ranks.

For Franz, this is where the challenge began. Her long-term strategy is to get more women into math and science classes, where they can pursue such careers as engineering, computer science, statistics, chemistry, dietetics, and zoology. She hopes a few out of that group will earn PhDs and become professors.

“I know this is a bit off the subject,” she adds, “but you know they always say that women’s pay is less than men’s. I think it’s 70 percent of what men earn. But if women and men have the same math background, there’s only a very small percentage difference, which is why I always say, ‘Math is the great equalizer.'”

Franz’ short-term strategy focuses on connections. At the Expanding Your Horizons Conference each year, junior high and high school girls meet with women who work as pharmacists, molecular biologists, nurses, architects, and even automotive technicians.

A similar program is now held at BYU during fall semester. These seminars provide a non-threatening way for students to explore many possible majors.

Admittedly, these one-time meetings are not the same as being taught in the classroom by a woman mathematician or scientist, but Franz believes they are enough to get women interested. “Then it takes encouragement and support, but they know it can be done.”

In speaking of support, Franz is adamant that this can be given effectively by both female and male professors. As proof, she recounts numerous stories involving her male colleagues and the great lengths they have gone to avoid the chilly climate women students so often experience.

What Franz doesn’t talk about is the coaching she has given many of these professors. Mary Jo Tansy, a former engineering student at BYU and the administrative intern for BYU’s Women in Science Center, says Franz has spent years analyzing the way science classes are taught and what teaching methods discriminate against women. “One on one, and in her very mild-mannered way, she has talked with professors who have unintentionally used these methods. And they have changed, often thanking her.”

Franz now believes that it is not the math and science professors who discourage women students, but the students’ peers.

“Our female students are constantly asked by their roommates, their boyfriends, their siblings, ‘What about being a wife and mother?’ Sometimes, the feelings of guilt are so great that some of our students give up,” says Franz.

When approached by these young women, who are usually in tears, Franz doesn’t give the typical pep talk. At times, however, she would like to. “Because if you look at just the statistics, it makes no sense for a woman not to prepare for employment. Less than 10 percent of women are full-time homemakers who never work outside of the home. Even if women are able to stay home when their children are young, most of these women are working outside the home by the time they are 40. Often it is to help pay for their children’s education or missions. And most of these women will work 20 years or more.

“But, unlike what is perceived,” she says, “a woman with more education and more options has far more flexibility. Many well-educated women can work two days a week and make a good salary.

“Then again, some of our students won’t marry. When a professor tells a class that includes 250 women that they should only devote themselves to becoming full-time mothers, there are 25 women in that class who will never marry. What type of monkeys are these teachers putting on their backs? These women may feel that they are total failures. But they have other missions in life.”

And this is what Franz tells the students at her door. “I ask them to seriously look at their patriarchal blessings and then at their own feelings, talents, and weaknesses. I ask them to make it a matter of fasting and prayer, so that they can go to their Heavenly Father and ask, ‘What is it that I should do?’ Then, if they are comfortable with the answer they have received, the rest doesn’t matter.”

A religion professor and the father of a talented daughter who was “running into a sea of people telling her what she really should do” came to Franz for advice. When she told him the advice she gives to students, he said, “I like that; it cuts through the knot.”

“We have on our campus some of the most talented young women and men in the world, and when you look at what is happening around us and in the Church, it is apparent that these young people have been called to wonderful, unique missions–some traditional and others less traditional–and they have got to prepare for them,” says Franz. “These missions are special to them. I’d like to see all of our students prepared. But above all, I want them to fulfill their missions, whether they are male or female.”

It’s for this reason, even if she already has an overabundance of citizenship points to her name, that Franz says she will stay up half the night getting letters out to prospective students–those who have scored high in the math and science areas of the ACT test or who have merely expressed an interest in the sciences–begging them to continue on in their math classes and start their chemistry. “I just want them to keep their options open until they know what it is they should do.”

And if they already know? “Well then, I want them to feel comfortable and at peace with the decisions they have made.”

Mott spent the last 2 years creating six paintings focusing on the experience of women during the Nauvoo era.