By Tom Johnson in the Spring 1999 Issue

Most cowboy aficionados know that none of the romanticized movie cowboys–Clint Eastwood, John Wayne, Gene Autry–had much correspondence with reality. There were real men who raised cows and rode horses, but they never made it to the screen. The classic cowboy era lasted only from 1865 to 1880, beginning with the rise of the cattle industry and ending with the development of the railroad industry.

There are still a few cowboys, however, even among BYU alumni. John A. Bascom, for example, lives alone on a 16-acre ranch in Victorville, Calif., with two horses and a barn–“a gentleman’s ranch,” as he calls it. From his ranch, Bascom works to preserve history and maintain cowboy reality–in art and action.

Although ranching was a family tradition dating back to the 1850s–his father, grandfather, and great- grandfather all ranched–Bascom chose to join his father in the art business after graduating from BYU in 1972 with a degree in fine arts. While earning his degree, Bascom spent much of his time re-creating the animals he grew up with: “My sculpture emphasis was Western, and so I sculpted horses,” he says. “The horse is the most romantic animal in the West. Of course, wild cattle were part of it, as well as mules, but the horse–the symbol of the horse and the looks of the horse–that’s what has been romanticized through the ages.” 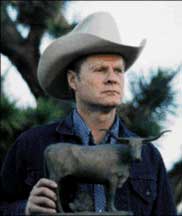 John A. Bascom, artist and rancher, works to preserve cowboy reality. The sculpture in this picture, “This American Longhorn,” was created by his father, the late Earl W. Bascom.

Bascom’s barn has been converted into a bronze casting foundry where he casts Western sculptures, his own creations as well as the creations of his late father, Earl W. Bascom. “I consider myself a professional horse chaser–‘chasing,’ or carving, bronze horses,” he says.

Beyond preserving cowboy culture in art, Bascom combines an interest in Church history with his love of the old West by organizing weekend cattle drives. The drives he creates give cowboy aficionados a taste of the realities of the West. In one drive, for example, three riders were temporarily lost downstream during a river crossing. “A lot of those who romanticize Western culture probably don’t find themselves wanting to live it full time,” he says. “They probably appreciate their cushioned chair back in the office a little more.”

Last June, when Bascom re-created Jefferson Hunt’s historic 1848 cattle drive, 71 cowboys from as far away as Utah and Arizona flocked to San Bernardino County, Calif., to participate. When Jefferson Hunt–Mormon Battalion captain, California settler, brigadier general of the state militia, state assemblyman, and cowboy–arrived in the Salt Lake Valley in the fall of 1847, he found the Saints lacked sufficient food for the winter. After suggesting to Church authorities that he return to California for supplies, he was entrusted with Church funds and commissioned to make the trip and return with food on the hoof.

Because the trail was faint, it took Hunt and his 18 men 45 days instead of 25 to reach Chino Valley. As a result, the men were starving and ate three of their horses along the way. When they reached Cajon Pass, the horses were so weak the men couldn’t ride them, and the men so weak they had to hold on to their horses’ tails to be pulled over the mountain pass, according to Bascom.

Six weeks after arriving in Chino Valley, Hunt’s party began the 700-mile cattle drive back to the Salt Lake Valley with 200 cows and 40 bulls. “Exactly half the cattle herd was lost along the trail due to starvation and Indians,” Bascom records. The trek was the first known cattle drive from Southern California to Utah. The path the cattle stomped would later become Interstate 15, and Hunt’s two-month route a mere 10-hour drive by car.

Bascom’s re-creation of Hunt’s cattle drive, which was led, appropriately, by Jefferson Hunt’s great-great-grandson (an expert rider and a BYU graduate), covered 25 miles instead of 700, had 60 cattle instead of 240, and involved 71 riders instead of 19. “I didn’t expect the cowboys to outnumber the cows,” says Sharon Fillerup of Layton, Utah, a participant and also a BYU graduate. “A lot of people rode off to the side, but if you wanted to, you could get in there with the cattle and shout hee-yah’s and so forth.” The ride was such a success that Bascom has decided to make it an annual event.

Bascom believes that, like an old building, history can be vandalized or preserved. He writes, “We can throw rocks and smash its windows, or we can watch the sun rise through its glazed glass. Young people throw rocks through history if they don’t understand it. Without an understanding of history, anything old is just a piece of trash. You can throw Grandpa away if you don’t appreciate the experiences of an old man. In the television-driven world, we watch instead of experience and let others replicate reality instead of touching it.”

Bascom’s art and cattle drives allow others to touch a bit of cowboy reality.

After a career with the military Joseph L. "Ren" Allred returns to BYU.

Some answers can be found in DNA and these researchers are determined to find them.