Text, blog, record, or snap—it takes just a few clicks to connect with your family.

A mere 10 years ago, the Internet was mainly a splendid new way to distribute information, cell phones mostly ensured you weren’t stranded on the freeway, and video games generally were mind-numbing but harmless entertainment. Digital demons were flitting about, to be sure, but no one imagined that in only one decade pornography would become one of the most popular reasons to surf online, cell phone text messaging would turn into a new device for bullies, and video games would morph into terrorist tutorials.

Technology can be scary indeed. Parents would be wise to keep abreast of the dangers, from the darker side of realistic role-playing games to the potential abuses of text messaging. But what about the upsides? Can parents exploit technology for good? Can those intimidated by technology get beyond their fear and become technology leaders rather than technology laggards? The answer to both questions is yes, even if you have no idea—yet—how to send a text message or how to set up a family Web site.

So before you decide that blogging or digital video recorders are beyond your ken, let’s look at some of the positive ways you can use these and other technologies to strengthen your family. For help, BYU Magazine asked information systems professors Marshall B. Romney (BS ’71), Stephen W. Liddle (BS ’89), and Bonnie Brinton Anderson (BS ’95) to discuss the topic.

Millions of teenagers have cell phones these days, which means millions of parents are worried about their children talking too much instead of doing homework, causing a cell-phone related auto accident, or becoming a target of cyberbullies via text messaging. If you’re a holdout because you’re afraid of those possibilities, you can limit the downsides while adding a powerful tool to your family communication toolbox. 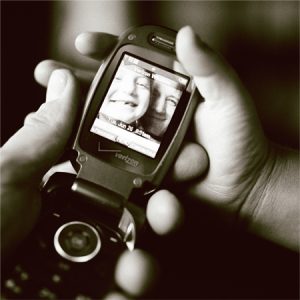 For families, text messaging is perhaps the most powerful feature of cell phones because it opens a bonus line of communication. If you don’t know how to send a text message, it’s easier than it looks. Asking your children to teach you is in itself a way to connect with them. A friend of Liddle’s bought his four children cell phones on the condition that every day they send him a positive text message. “So every day he gets messages from his daughters saying, ‘Dad, you’re the greatest. Thanks for the cell phone.’ It’s a way to build family warmth.”

Romney says he finds the monitoring capability of cell phones indispensable. He has two teenage sons still at home, and he and his wife have outfitted both with cell phones so they can more effectively supervise the boys. “A lot of parents say you shouldn’t give cell phones to kids, but that way I can find them. When they’re not in at 12 o’clock, they get a call,” says Romney.

Anderson points out the advantage of cell phones for parents with college kids. At BYU most students who live off campus share quarters with three to five other students, which means reaching your child via landline is next to impossible. “How did we survive with one phone for six roommates that were never home? Roommates don’t give messages—ever. With cell phones parents can keep in better touch,” says Anderson.

Thousands of teens and young adults have their own online journals, or blogs, but how many parents have one? The information systems professors believe family blogs can be another powerful—and unexpected—way to unify family members. Liddle first saw the value of blogging in his two graduate courses, where he requires each student to set

Encouraging a teenager who’s withdrawing from the family to create a blog could have a similar effect. “You can’t say something to your mom and dad, but you could write in your blog, knowing that they’re going to read it,” says Romney.

Anderson points out that if parents create a family blog, a child who’s not happy with the family might not post to the blog but will likely check it. “They’ll be lurking. They’re going to read what’s there. It opens up more communication.”

DVR technology is another way parents can improve family life. With typically 80 hours of recording time, user-friendly menus, and the ability to zip past commercials, DVRs allow parents and children to decide on the shows they want to watch, record them, and watch them at their own convenience. They also can avoid the interruptions—and materialistic messages—of commercials.

“With our DVR, my kids don’t watch very many commercials, and I can know exactly what they’re watching,” says Anderson, who has two daughters, ages 6 and 4. “They’re not watching what’s on TV at the moment; they’re watching what I’ve recorded—Dora or Blue’s Clues or SpongeBob. Planet Earth has a great series at crazy times, so now when they want to watch TV, I’ll say, ‘Let’s go watch about the Galapagos Islands.’”

Romney and his family use their DVR to record all eight televised hours of general conference. They watch it live, but they can also watch it whenever they want. They use it regularly for family home evening, and Romney confesses he sometimes turns it on in the middle of the night when he can’t sleep.

Romney also believes a well-chosen television show can be unifying for a family, whether the show is recorded on DVR or a traditional VCR. One of his family’s favorite shows airs at a time that’s not convenient for everyone. So instead of watching the show live, they record it and agree on a time to watch it. “We’re all sitting around watching this show together and talking about it. It’s brought us together as a family,” says Romney.

Several commercial Web sites allow families to create custom books that include life histories and photos. Anderson created one after a recent family trip to Hawaii, and she now has hard copies as well as a digital version that can be e-mailed to family anywhere in the world. “We collected everyone’s photos digitally, enhanced them, and added narratives.” While such a book could be created without digital technology, it would be more difficult and less likely to ever get completed, let alone distributed. The impact is significant, says Liddle.

Families have many additional options for sharing photos. Web sites like MyFamily.com let families set up private, password-protected sites where family members can post photos. The free software program Picasa and photo-sharing Web sites Flickr and Photosite can help users organize their digital photos and select those they want to e-mail. The programs automatically bundle up the selected photos and compress them to a manageable size for e-mailing.

If you’re among those reluctant to learn new technologies, overcoming your resistance is not a trivial matter. The identities and sensibilities of the rising generation are so closely tied to technology that parents and grandparents who get too far behind risk creating an unbridgeable generation gap. Those who let technology terror get the best of them become technology laggards. The truth is, if we work at it, we can understand enough technology to be leaders in our families rather than laggards. While being technologically savvy can never replace love and warmth in a home, adding technology leadership into the mix can be an extra ingredient that makes a difference.

See commencement 2016 through the social-media snapshots of graduating Cougars.