Illuminating the Book of Mormon 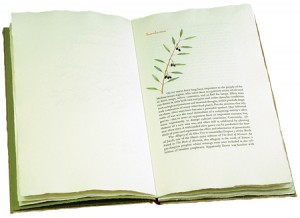 The Allegory of the Olive Tree won the top book design award in the United StatesJohannes Gutenberg took care to adorn his Bible with watermarks, rubrication, and flourishes. It is, in a word, “marvelous,” according to adjunct visual arts instructor Robert Buchert, who teaches Type as Image at BYU and runs the Provo-based Tryst Press. “There’s a great tradition of publishing scripture in extraordinary conditions,” Buchert says, though it is mostly seen with the Bible and the Qur’an. Never had such artisanship been applied to the Book of Mormon.

“People who would otherwise never consider looking at the Book of Mormon may now see this book,” says Buchert. “And though it’s precious as an object, they may get an interest in its contents.”

The book contains chapter 5 of the Book of Jacob, the text as near to the original translation as possible, as derived by English language professor Royal J. Skousen’s (BA ’69) Book of Mormon Critical Text Project. The versification has also been removed, giving the allegory a storybook quality and allowing the reader to better comprehend it as a whole.

All of the paper is handmade, watermarked with an olive branch, and bound in either olive wood or silk and leather. The Bucherts made 50 copies, taking years to delicately hand paint each image. The paints, made from precious stones, will never fade. Each letter of type was handset—printed in the same manner as the first publication of the Book of Mormon—and the first letter on the first page is gilded with 24-karat gold.

BYU’s Special Collections exhibited its copy of The Allegory of the Olive Tree over the summer, alongside other Tryst Press productions.

“The Hertzog award is quite an honor,” says Robert L. Maxwell (BA ’81), Special Collections adjunct currator. “It is doubly of interest that the production of a selection of the Book of Mormon should be the book chosen.”