If the SHOE Fits 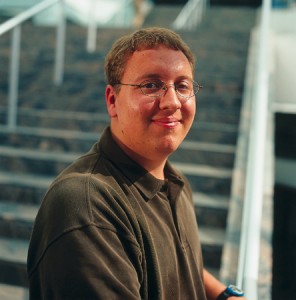 SO what about fighting?” asks a precocious sixth grader on the front row. “Can you fight?”With characteristic lightheartedness, Lincoln S. Dewey, ’03, replies, “Well, I can probably fight, but I don’t know that I would win.”Dewey, who has cerebral palsy, explains to the elementary-school children that his mother was in an accident when she was eight-months pregnant with him; the brain injuries he sustained from the accident permanently weakened the left side of his body and made it difficult to use his legs.Dewey doesn’t mind the sixth grader’s bluntness. In fact, as a member of BYU‘s Students Helping Others Excel (SHOE) program, he encourages it. Through SHOE, Dewey and other disabled students travel to local schools to speak about overcoming obstacles in life.Although Dewey has had his own challenges to overcome, he refuses to let his disability prevent him from helping others. He first began working with BYU‘s University Accessibility Center (UAC) one and a half years ago. Volunteering for everything from reading books on tape to typing for a student with quadriplegia, Dewey soon became a familiar face in the office. He was also instrumental in attracting other volunteers to the program. “Lincoln is our number one recruiter,” says Rochelle A. Rabe, ’95, a UAC counselor. “There have been times when he has recruited 25 volunteers for us in one day.” Rabe attributes Dewey’s success to his enthusiastic personality. “Lincoln knows everybody,” she says.When Rabe began advertising for SHOE, a peer-mentoring program, Lincoln was one of the first to sign up. The purpose of the program, Dewey explains, is to integrate freshman students with disabilities into university life.SHOE groups also provide a close network of friends who understand the challenges of working through college with a disability. Although each group
is supposed to meet once a week, Dewey went the extra mile. “I would be out on the weekend,” Rabe recalls, “and I would see Lincoln and his SHOE group hanging out together. He is one of our most successful and visible mentors.”Once a month the SHOE groups meet together to discuss issues group members face, such as legal stipulations for getting a job and what to do on a date. “The discussion that stands out in my mind,” Dewey says, “was when we each shared a spiritual insight relating to our disabilities.”The students soon decided to share what they had learned with the community. In addition to speaking to elementary-school students, SHOE groups also spoke to the special needs students at Pleasant Grove High School. “A lot of people think, ‘I have a disability; there’s no way I could go to college,'” says Dewey. “We tell them that they can.”A junior majoring in political science, Dewey would like to have a career in politics and hopes to land an internship with the Utah State Legislature next summer. “I like foreign policy. I think I would like to work on the international level,” he says.Whatever career path he chooses, Dewey knows he will continue promoting disability awareness. “BYU is a good platform—a good place to start,” he says. “But there is so much to do. I will be involved in this for the rest of my life.”

As he takes on a new role as BYU President, all of his previous roles have combined to make him the perfect fit.