Shelley Tuckfield Graham (BA ’01) sits on a tall wooden stool. Light reflects off of her brown hair as she bends over her sewing. She pushes her needle in and out of blue-green fabric and begins to speak:Tell me what is woman’s sphere?What path was she designed to tread?What may she hope? What must she fear?What may she do and what must dareTo win her daily dole of bread?Graham is one of a handful of performers in the theatrical production of Discoveries: Two Centuries of Poems by Mormon Women, and “Woman’s Sphere,” written in 1873 by Lu Dalton, is one of 33 poems performed—spoken or sung—in little over an hour. In this particular poem, Dalton, while asking what woman’s sphere is, also advises man on woman’s potential and her proper place in life: “To fit her for her duties grave, / More light and room must woman have— / To walk side by side with you.”Learning about the life experiences of 19th- and 20th-century Mormon women was the goal of BYU researchers as they prepared a reader’s theater of poems about Mormon women by Mormon women. Their project eventually evolved into a theatrical production, a film, and an anthology, all titled Discoveries: Two Centuries of Poems by Mormon Women.

A Mother of Zion 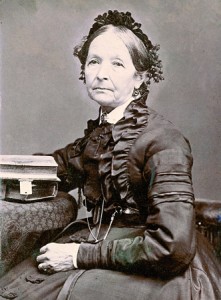 “Eliza R. Snow is a central figure, if not the central figure, in LDS women’s history in terms of her contribution and impact,” says Smith Institute director Jill Mulvay Derr. “She’s a unique figure. She is certainly the one who set the women’s organizations of the Church on a strong footing in the 1860s and ’70s. She is the mother of all of those organizations. It seemed to us that the most appropriate way to celebrate the anniversary of her birth would be to promote scholarship more generally in Mormon women’s history.”Snow began writing poetry at a young age, sometimes submitting her school assignments in verse. She joined the Church in 1835, and Joseph Smith called her to write poems for and about the Church. She came to be known as “Zion’s Poetess.” Her poetry includes the hymns “O My Father” and “How Great the Wisdom and the Love.”Organizers of the 2004 celebrations decided a reader’s theater of Mormon women’s poetry would be a fitting tribute, both to Eliza R. Snow and to women. “We wanted people to see the connection between the 19th and 20th centuries in terms of women’s experience,” says Derr.

Sheree Maxwell Bench (BA ’98), a member of the Women’s History Initiative Team, selected poems from the 19th century, while Susan Elizabeth Howe (BA ’71), an associate professor of English, found poems from the 20th century. “We wanted to make it representative of Mormon women’s experience,” explains Howe, “so it had to be by women about their own lives. And it had to be poetry that would be interesting to hear aloud, because it was going to be a performance piece; there had to be a dramatic element to it.”

Searching through various archives, periodicals, and collections, Bench and Howe uncovered the work of many Latter-day Saint women poets. “There is a considerable body of poetry by both 19th- and 20th-century Mormon women that isn’t very well known, particularly the 19th century,” Howe says.Bench had a particular goal while looking at 19th-century poetry. “There is a need to look beyond what other people have discounted—the antiquated style, perhaps the lack of sophistication—to look at the content, of what it is they’re trying to say. They’re exploring what women’s roles can be within the framework of the gospel.” 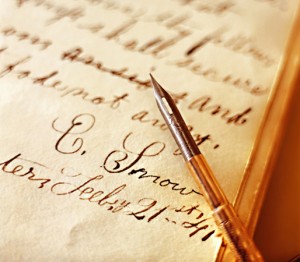 Each version of Discoveries—anthology, play, and film—is arranged as “a journey through a Mormon woman’s life,” says Howe. “It’s framed in religious terms, in terms of creation and then entering into eternal life, but between that it’s a whole journey from birth, through childhood, through being a teenager, through getting married and having children, through having to let those children go. There are some of the sorrows women experience, such as failing health and even death.”Derr notes that “poetry is a particular way to encapsulate anyone’s experience, and it’s a venue that has worked very well for Mormon women. It allows them to share parts of their experience that they may not have other occasions or venues for sharing.”The topics range from humorous first dates to mourning, and the humor is just as important as the mourning, Bench says. “I see it as historical evidence of their lives and the way they felt about the things that they were encountering. I think you can look at the poetry and see how the women were feeling, what they were thinking about the world around them.”

“The Eternal Father and Mother”

O my Father, thou that dwellestIn the high and glorious placeWhen shall I regain thy presence,And again behold thy face?Clutching a scarf, Melinda E. Lockwood (’07) looks upward as she sings “Invocation, or the Eternal Father and Mother,” which most Latter-day Saints know as the hymn “O My Father.” The words are familiar, but the melody and the complex piano accompaniment, written by London-based composer Harriet Petherick Bushman, add new life to the lyrics of Eliza R. Snow. It feels appropriate, as the six other performers join in the final song, for this last song to be a poem written by the woman whose life was the catalyst for the entire collection.With the help of director Charlotte Pomeroy Nelson (’01) and composer Bushman, as well as three singers and four actresses, the project grew well beyond the team’s expectations. “This performance and the collection of poetry took on a life of its own as Sheree and Susan and then Char and the others got involved in it,” says Derr. “Each contribution, each iteration, made something fuller and more beautiful and more poignant in some ways. As hand after hand has contributed, it’s grown and developed into something truly magnificent, far beyond what I’d imagined as a one-night performance.”What remains at the forefront of all of these projects is the poetry. “All versions of this project began in poetry,” says Howe. “Every word spoken or sung in this performance and on the DVD is from a poem. Because this project has passed through so many genres in its short life, it shows what poetry can be and do given the chance.”“Our goal,” adds Bench, “was to highlight Mormon women’s poetry—poems from the 19th century that have been rediscovered and more contemporary poems by some of our most talented poets. In weaving them together we discovered a wonderful interplay across generations that invites the audience to hear voices that have been missing, voices that articulate Mormon women’s experiences.”See two poems from the stage production online at more.byu.edu/discoveriespoems.