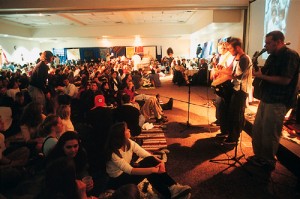 International music adds flavor to the Hunger Banquet, a fundraiser that focuses on global poverty and hunger.

SIX students share a plate of beans and rice, improvising for their lack of utensils with pieces of tortilla. Delicious aromas of lasagna, chow mein, and enchiladas waft down to them from the table next to the multi-colored blanket they share.In its 11th year, the annual Hunger Banquet, hosted by Students for International Development (SID), increases awareness about world hunger while raising money for international development projects. To simulate approximate world distribution, 75 percent of the students who attend the Hunger Banquet are third-world citizens for the night, while 15 and 10 percent enjoy second- and first-world status.As they enter the room, each student is assigned a new identity for the night. The profiles range from Rakiya, a Rwandan mother of six living in a small shack near a coffee plantation, to Jose, a wealthy Mexican college student. Each receives meals according to his or her designation—beans and rice for third-world, pizza for second-world, and a variety of gourmet dishes for first-world—all donated by local restaurants.Describing her experience as a third-world citizen, Vileena B. Begay, ’01, says, “We were actually fighting over food. We ate lunch and dinner today, but still we wanted more beans and rice. It really helped me realize how blessed we are.”“Our first objective with the Hunger Banquet is to raise awareness among students and the BYU community about the suffering that we all know exists but that we don’t deal with on a daily basis,” says Eric M. Fotheringham, ’01, president of SID.More than 1,200 students attended the banquets this year. Over two nights, students contributed more than $7,000 for use in carefully selected international development projects.Funds raised this year will support a variety of projects—from farmer-training co-ops in South Africa to the distribution of Spanish translations of health guides in Provo. The funds will also feed street children in Zambia, educate people in Thailand about AIDS, build a rehabilitation center in India to combat instances of female infanticide, and provide assistance to a man who is pursuing a nursing degree to better serve orphans in Romania.As they eat dinner, students watch slides portraying the effects of poverty and hunger across the world. After dinner Samite, a world-renowned musician and composer from Uganda delivers a message about his experiences playing music to impoverished people in Africa. He then performs his music, singing in the Luganda language and playing native instruments.“Hearing stories about third-world countries and poverty in big cities makes it more real to me because I’m not around it very often,” says Bradford G. Singley, 07. “The whole experience of the Hunger Banquet helped me to recognize my responsibility to use what I have been given to help others.”