How Firm a Foundation

This building is 100 years old, and still it attracts students from around the globe.

A white neoclassic building—the only one of its kind on BYU campus—sits like a jewel box on the south end of campus. It honors Karl Gottfried Maeser, whose ideals of scholarship, leadership, and spirituality still provide an indelible blueprint for a BYU education. 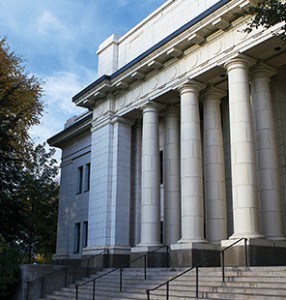 The pillared facade of the Karl G. Maeser Building has welcomed hundreds of thousands of students to campus over the last century; it will now welcome them back for Homecoming 2012.

The Maeser legacy began at the behest of President Brigham Young, who called the educator to become principal of the struggling year-old Brigham Young Academy in 1876. President Young armed Maeser with the now-famous charge, “I want you to remember that you ought not to teach even the alphabet or the multiplication tables without the Spirit of God. That is all. God bless you.”

Following that directive, the master teacher guided the student body through the early years that were clearly more challenging than he had anticipated. When he spoke at Brigham Young Academy’s first Founders Day on Oct. 16, 1891, Maeser explained he had had “no comprehension of the magnitude of the work” to come when President Young laid out the plans for his new mission. He added, however, that he never wavered from his conviction that the academy was a divinely inspired school of destiny.

It appears that colleagues, students, and alumni never wavered from their devotion to Karl G. Maeser either. Soon after his death in 1901, they rallied to create a fitting memorial for their treasured teacher. They decided to construct a building in his honor near the brow of a hill overlooking Provo, and President Joseph F. Smith presided at the groundbreaking.

The graceful structure has stood for 100 years, a testament to Maeser’s prophetic dream of seeing the hill “filled with buildings—great temples of learning.”

To celebrate the building’s centennial, BYU will honor the legacy of the Maeser Building during Homecoming 2012 and use the theme Of Pillars and Cornerstones to reflect its place in BYU history.

“Typically at Homecoming, we honor an individual whose sizable contributions and sacrifices have contributed significantly to the lifeblood of the university,” says John C. Lewis (BA ’77, MBA ’79), BYU’s associate advancement vice president and executive director of Homecoming. “But this year we thought it fitting to recognize the 100-year anniversary of the Maeser Building and the remarkable heritage it represents.”

This first building on Upper Campus was built with great sacrifice. BYU president George H. Brimhall (ND 1877) declared, “We shall need a long pull and a strong pull, an ‘all-put-together pull’ to build that building.”

Jesse Knight provided a substantial portion of the needed funds and was joined by members of the BYU Alumni Association, local ecclesiastical leaders, other schools, and the Church. Additionally, many generous faculty members sacrificed up to half a year’s salary to see the building completed.

Originally designed for classrooms, the Maeser Building has filled many roles during its history. Its 175-seat assembly hall was once the site of college devotionals and faculty meetings. During World War I it housed a unit of the Student Army Training Corps. At various times it has hosted the office of the university president, the university press, the campus switchboard, and the Purchasing Department. Many academic colleges and departments have also occupied its three floors.

Perhaps most fitting, however, is its current use for student scholars. When the Maeser Building was restored to its original classic dignity in the mid-1980s, it became the home of the Honors Program. It also houses Undergraduate Education.

A beehive, symbolizing industry, embellishes the roof of the Maeser Building. According to former BYU academic vice president John S. Tanner (BA ’74), it provides a visible reminder of BYU’s pioneer past and identity with The Church of Jesus Christ of Latter-day Saints.

“The neoclassical architecture reminds me that BYU belongs within a venerable academic tradition stretching back to antiquity,” Tanner writes in his book Notes from an Amateur. “The beehive reminds me that BYU also belongs within a specifically Latter-day Saint heritage, in which pioneers, out of their poverty and through their industry, established a house of learning in the desert at the behest of prophets and inspired by modern revelation.”

As a place of secular knowledge and research, Tanner notes, the Maeser Building also exemplifies what President Spencer W. Kimball called “the vital and revealed truths that have been sent to us from heaven.”

Maeser at the Crossroads

Homecoming 2012: Of Pillars and Cornerstones

BYU Holds Its Own in Popularity Contest