Homecoming for Class of ’61

Participants at the 50-year reunion of BYU’s class of ’61 quickly picked up their nametags so they could reconnect with former classmates during Homecoming 2011. Class president Max L. Pinegar (BS ’61) and his wife greeted guests as they entered the Wilkinson Student Center Ballroom. 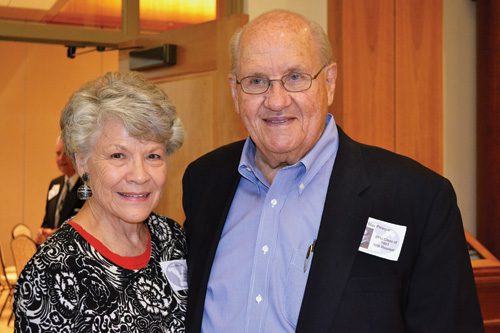 Class of 1961 president Max Pinegar and his wife, Lynne Johnson PInegar (’58), reminisced with old friends at his 50-year reunion.

“I was glad to be back,” Pinegar said. “I saw a lot of old friends and people I had not seen in 50 years. I wondered if they would look as old as I do and just look at me and go, ‘Who are you?’”

Former classmates were asked to tell their life stories using bendable craft sticks. The graduates and their spouses laughed and shared their projects and the successes in life that inspired them. One man displayed his sculpture, which looked like a work of modern art. “It’s abstract,” he said, “multidimensional. You can look at it in a lot of different ways.”

The woman next to him held a chain of circles. “I’ve done links,” she said, “because even though we’ve moved 23 times, what I’m thinking about so often now is all of the connections in our lives. Wherever we have gone, there have been people connected to others we have known.” She said her husband recently ran into the son of the missionary who baptized her mother.

Around the perimeter of the hall, displays commemorated different events and organizations at BYU, including two now-defunct clubs whose former presidents were in attendance.

Kay Thompson Swan (BS ’61) had been president of an organization for girls waiting for missionaries. “We got together and supported each other every week,” she said. “We wrote letters, made tapes, and did all kinds of wonderful things for missionaries. We would do all sorts of fun things while other people were dating.” Since those days as president, Swan has earned her PhD and spent time teaching at BYU.

Joan Thomander Stevens (BA ’61) was the president of White Key, an “honorary service unit” comprising 24 women who had demonstrated their desire to serve. They have stayed in contact over the past five decades. Stevens has also taught at BYU and was the reunion chair.

Regarding the reunion’s success, Pinegar remarked, “You know, somebody asked me how it feels to be this age. Well, it feels terrific. It is just wonderful to see old friends—I just can’t tell you how great that is.”

For Jimmer Fredette, Charles Abouo, and Brandon Davies, it was like 2011 all over again on the court.

When Nancy Whitten wants to see old friends, she organizes a BYU reunion, and she encourages others to do the same.

Committees are being formed for the Homecoming 2014 reunions.