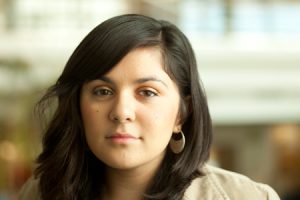 Candice Gutierrez was the first-place winner of the annual George H. Brimhall Memorial Essay Contest in fall 2010. Her winning essay focused on honored founder Harvey Fletcher and the 2010 Homecoming theme, Dare to Discover.

The fog in my mind is starting to clear. The hospital room comes into focus. My favorite teddy bear is by my side, wearing a medical mask. My doctor is talking to my parents, handing them prescriptions. I am 5 years old, and I have just finished my third operation to fix my hearing.

Flash forward a year. I am sitting in a damp basement classroom, beginning speech therapy. My teacher asks me to repeat after her. She says, “Sun,” and I reply, “Thun.”

All those years of partial deafness meant my speech development was delayed. During the years that followed, I saw no end to my speech and hearing problems. But my team of doctors and therapists saw a much different situation. They saw a young girl who would one day be able to read out loud in class and pronounce her name correctly—they saw my untapped potential.

Their confidence stemmed from the concrete science guiding their work in speech and hearing. Their confidence can also be traced to Harvey Fletcher, a scientist who studied the anatomy of sound and explored the correlation between hearing and speech. Throughout his life, Fletcher saw what my speech therapists and doctors saw in me: the power of the unseen waiting to be discovered.

Fletcher expounded on two sciences, atomic physics and acoustics, with very little visual evidence to reward the eye. At the dedication of the Eyring Science Center, he gave this prophetic statement for future students: “God-fearing scientists . . . will eventually be the saviors of our culture and civilization.” Fletcher’s words were prophetic about his own work, which would be a savior to the speech and hearing impaired, like me.

Without knowing it, I was becoming a master speaker through the guidance of patient speech therapists. Fletcher had that same patient approach. He served as a professor for BYU, inspiring students into the scientists they would become. When Fletcher left BYU for New York, President Joseph F. Smith gave him this advice: “Promise this, that you will keep your testimony strong and keep up your Church activities. If you do so you can do more good for the Church in New York City than you could do here at the BYU and you will be successful in your work.” Harvey soon became a branch president and later the stake president for a growing number of Latter-day Saints in New York. Believing in people is what drove Harvey’s life in the Church and the classroom. It also drove others to help me surmount my speech disability.

At first Harvey did not seem like the ideal student. He failed his first physics class, and he came from a family with no formal education. But like anyone with a good scientific mind, he was persistent. Karl G. Maeser once said to a Church audience about young Fletcher, “I want this congregation to know that this little boy will one day be a great man.” Even with that endorsement, Harvey still had to muster the confidence to be whom he wanted to be.

That same spirit helped me overcome my speech impairment. There came a time when I could no longer borrow others’ confidence; I had to rely on myself. Like Harvey, I would shock others with my work. In the fifth grade I would enter a speech contest and take second place. I performed on the stage above the room where I had my speech therapy, conquering it in my own way. I dared and was rewarded with confidence.

Harvey Fletcher never saw a sound wave fill a room, but he knew it was real and knew its capabilities. He did not walk into his early science classes knowing he would become the subject of textbooks. All this was a mystery to him, and it would have stayed a mystery if he had never had the courage to discover his own potential.

We must do the same. Dare to discover your potential. Show the world what they are not seeing.