Student entrepreneur Jayson Edwards is making Happy Valley even happier, one dawg at a time. 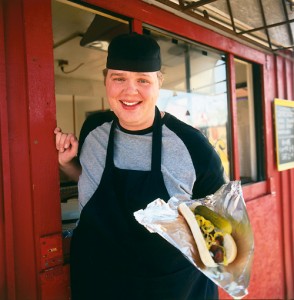 At a few minutes past noon, classes have just let out and the line at J Dawgs hot dog stand is already stacked some 15 people deep. Behind the 12-foot by 12-foot hut is some lawn furniture for customers to eat at. Next to that is a patch of grass, where students are starting to sprawl with their dogs and sodas, the sounds of ’80s keyboard music wafting down from a pair of speakers.

“I’ll have a Polish and a soda,” says a twentysomething kid at the front of the line. He’s in a pullover, jeans, and a pair of high-tops. He rifles through his pockets for some change, finds it, then forks over his $3.50, adding to a coffer that’s already brimming at roughly $40,000 from the last quarter alone.

In fact, in the year and a half since J Dawgs founder Jayson G. Edwards (’06) started selling hot dogs out of a shack just south of campus, his business has grossed well into the six figures.

Still, the BYU senior says he’s not in it for the money. “I just enjoy building the business and making people happy,” he says, and he seems to really mean it.

Edwards, who recently won the Marriot School’s Student Entrepreneur of the Year Award, opened his hot dog stand in June 2004, drawing his inspiration from the vendors he met on his mission in Toronto.

“You’d just get talking to these guys,” Edward says, “and you’d find out they’re selling hundreds and hundreds of hot dogs a day at $2.50 a pop. That’s a pretty good day.”

Some two years after he got home from his mission, and with more than a little elbow grease, Edwards managed to turn a vacant, left-for-dead flower hut into one of the hottest eateries in town.

Right now the clock is ticking toward 12:15 and the line has swelled considerably, doubling back to avoid the traffic. More ’80s music is playing. More kids are spread out on the grass. Some of Provo’s workforce now mingles with the college kids in line. Some are in uniforms. Some are in suits. Some are in professorial blazers.

Without any formal advertising, Edwards has grown his customer base up from family and friends to a veritable Who’s Who of the Wasatch Front. The other day Salt Lake mayor Rocky Anderson dropped by. Then Elder Merrill J. Bateman showed up in the next hour. Other celebrity sightings include R. LaVell Edwards (EdD ’78) and the father-son baseball duo, Vernon (’69) and Vance (BS ’83) Law.

And all this from an Asian Studies major whose real day job is in the classroom. Ultimately, Edwards says he hopes to expand his business out to a few more locations in Utah before selling the franchise and moving on to a career in international diplomacy.

In the meantime, he and his wife are working on a deal to commercially bottle J Dawgs’ trademark “special sauce,” an heirloom recipe Edwards got from his grandmother. The two are also planning for the cruise they scored along with $30,000 in the Student Entrepreneur contest.

Another twentysomething gets to the front of the line. Edwards says, “Hey bro’, what can I get you?” Another dog. And another few dollars. And then the music is all you hear; then it’s the “dreamers” song, like a soundtrack for Edwards’ life, just floating up over the noise of passing cars.