Rex E. Lee will be the honored founder at this year’s Homecoming celebration. 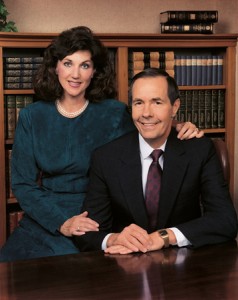 Former BYU president Rex Lee will be represented at Homecoming by his wife, Janet, who will be the parade’s grand marshall.

When a search committee selected 36-year-old Rex Edwin Lee (BA ’60) to be the founding dean of BYU’s J. Reuben Clark Law School in 1971, it was a risky decision.

“The law school wasn’t accredited, it had no faculty, no building, no library, and no students,” recalls Bruce C. Hafen (BA ’66), then a young assistant to new BYU president Dallin H. Oaks (BA ’54). “Everything rode on the academic reputation of the dean and the faculty.”

Lee’s credentials included graduating at the top of his class at the University of Chicago Law School, clerking for Justice Byron White, and being a young attorney in Phoenix who had taught some law classes. Other credentials—assistant U.S. attorney general, solicitor general, and Supreme Court advocate—would come later. Choosing Lee was deciding on a man with potential.

Despite his lack of experience, Lee took the reins of the young school and helped craft what has become a nationally ranked legal institution. This year Rex Lee will be the honored founder at the university’s Homecoming festivities.

In the early days of the law school, Lee recruited distinguished faculty, actively sought students who qualified for prestigious law programs, taught classes, and even selected the facade of the law building, which now stands on the east side of campus. As he established the law school at BYU, the professional world continued to seek his talents. During President Gerald Ford’s administration, Lee took a leave of absence from the law school to become an assistant attorney general over the civil division of the U.S. Department of Justice. Later President Ronald Reagan recruited him to become the solicitor general, and he spent four years representing the U.S. government in numerous cases before the Supreme Court.

When he resigned as solicitor general in 1985, Lee became a partner at the Washington, D.C., law firm of Sidley and Austin, focusing on appellate cases, which frequently returned him to the highest court. A year later he returned to Provo, where he used phones, faxes, and planes to help him split his time between Sidley and Austin and the BYU law school. Throughout his career, he argued 59 cases before the Supreme Court.

Lee was named president of BYU in 1989, and, despite a recurrence of cancer, he accomplished much in his six years at the university’s helm. He was key in the efforts to streamline a BYU education—while maintaining quality—to help students graduate in a timely period. He also launched a campaign to raise $250 million for the university; four years after his death (and ahead of schedule) the campaign was completed, having surpassed its goal by more than $150 million. Additionally, building on campus increased with the completion or commencement of work on several major structures, including the Museum of Art, the Ezra Taft Benson Building, the Harold B. Lee Library, and the Wilkinson Student Center.

Throughout his life, Lee strived for both institutional and personal excellence, and that legacy lives on at the university where he served first as student body president and later as president. Before cancer cut his stride, Lee ran 13 marathons, and now members of the BYU community run in an annual race named for him. The proceeds of the Rex Lee Run, appropriately, go toward cancer research. Lee’s illness never slowed him down—he led the university for the six years just prior to his death.

“As our honored founder for 2008, Rex Lee stands as a shining and very tangible example of the devotion and commitment that have helped to build the BYU we enjoy today,” says John C. Lewis (BA ’77), chairman of the Homecoming executive committee. “The Homecoming theme, ‘Go the Distance,’ was inspired by his remarkable life. Whether as a leader, an educator, a family man, or a servant of God, Rex Lee personified excellence with a commitment to do whatever was necessary to win the race.”

A Look at the Baby Brain