From Refugee to City Councilmember

While growing up in communist Vietnam, Tom V. Huynh (BA ’96) learned about the United States while listening to illegal broadcasts by the British Broadcasting Corporation. 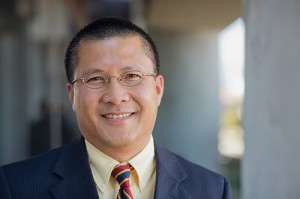 Tom Huynh’s journey to the West Valley City council started with a prayer in a refugee-crowded fishing boat.

After high school he was pressured to join the Vietnamese army, but his mother had lost her husband to war and did not want to lose a son too. She made arrangements for his escape, and a two-year journey began.

At age 19 Huynh found himself crammed with 98 others into a small fishing boat headed for the Philippines. En route they got lost, and their food and water supplies dwindled.

“At this point I began to think about religion,” Huynh says. “I looked into the sky and pleaded, ‘Please don’t let me die. I’m too young.’ I needed to believe in something.”

They eventually arrived at a refugee camp and 18 months later he met two sister missionaries.

“They said they were Mormon, but I didn’t know anything about that. They then invited me to church,” Huynh says. He became interested, moved to Oregon, and was baptized. Eventually he was called to serve a mission in Washington, D.C.

“I had an opportunity to baptize Southeast Asians, including Vietnamese,” Huynh says. “Plus, my English improved.” After becoming a BYU graduate, U.S. citizen, and real estate agent, Huynh decided to seek political office.

“I have been truly blessed to come to this country, and I want to contribute to society,” he says. He ran for a position on the West Valley City council in 2011 and won, becoming the first ethnic minority to be elected to the city council.

“Tom jumped right in,” says West Valley City mayor Mike Winder. “He has provided some outreach from our city to areas that may have been previously overlooked, and I truly feel his best days are ahead.”

The declining civility and ethics of politics and government can be reversed as good people make their voices heard.

Artists capture the essence of American identity in a diverse exhibit of historical scenes.