Camped near the base of Mount Pisgah in Thayer, Iowa, Kevin R. Henson (BS ’80) planned the first segment of a 2,500-mile journey to follow the trail of the historic Mormon Battalion. 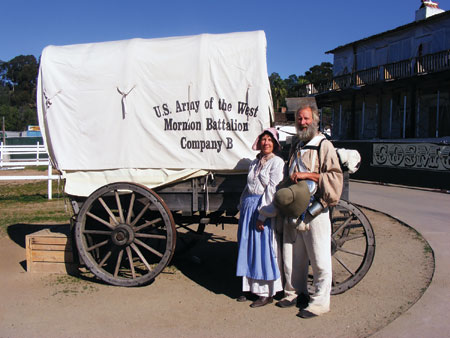 The journey would take nearly seven months—from July 5, 2008, to Jan. 29, 2009—and the outdoors would become a classroom for Henson, his wife, Denice “Denny” Watts Henson (BS ’79), and others who joined the couple at different times during the trip. Their expedition took them from Council Bluffs, Iowa, to San Diego and then to Los Angeles.

The Mormon Battalion’s march, which took place from 1846 to 1847, provided financial assistance from the U.S. government for Mormon pioneers. As the pioneers migrated west, America found itself at war with Mexico. President James K. Polk authorized Col. Stephen W. Kearny, commander of the Army of the West, to enlist a battalion  of Mormons crossing the plains to the Great Salt Lake Valley. Five companies were enlisted from the Iowa camps.

In his reenactment of the march, Henson, a self-employed resident of Midland, Mich., wanted to verify information about the trail, study the terrain, and perhaps even add to the body of knowledge about the historic company.

Henson learned more about the trek through a Boy Scout group studying living history. After diving into the many stories and journals documented during the original battalion march, Henson wanted to experience the trek himself. After formulating and sharing his ideas, Henson received an outpouring of support and information from others interested in the hike. Approximately 500 people joined the company at different points during the journey. One of them, Peter Guilbert of Auburn, Calif., hiked with the Hensons on three different occasions and says Kevin became like a brother to him.

“I am a descendent of Moses and Edward Wade, a father-son team from the battalion,” Guilbert says.  “I got a small feel of what they experienced and endured.”

While keeping with the spirit of the trek, Henson did not follow an exact route. “Much of the battalion’s route was across the open prairie, where you could walk anywhere you wanted as long as you didn’t step on a snake. That land is now a mixture of private and public lands. Where we could not get permission [to walk on the land], we kept to the closest road.” The Hensons wore period-style clothing and often slept in tents as part of their efforts to understand what the soldiers endured. When asked about following her husband across the country on foot, Denny described his growth and excitement over the years as he studied the battalion. “Kevin has done so much for me. It’s been easy to get behind him,” she says. She was amazed at the number of people drawn to him and the amount of time that Henson spent preparing himself for this historical event.

“We’ve had a chance to meet many interesting people along the trek and have made many new friends,” says Henson as he reflects on the recently completed trek. “It is something I’ll never forget.”

Life and Death on the Trek

A Heritage of Song