Engineering "control freaks" learn how to let go and allow miniature planes to fly on their own.

It might have been scanning unknown terrain for an enemy position or patrolling a national border or monitoring the acreage of a vast farm for crop health. Instead, the bird-sized plane buzzing across a blue October sky was peering down 200 feet on a small group of students, professors, and journalists in a park near Provo’s Rock Canyon.

Designed by a team of BYU engineering students and professors, the plane and its counterparts are examples of what happens when high-tech and low-tech collide. Made out of foam, plastic, and plenty of tape, from the outside the planes look amateurish enough. But a rough exterior belies the sophistication of their innards, which include a tiny camera and autopilot hardware.

The autopilot keeps the scrappy unmanned air vehicles (UAVs) aloft, guides them, and intervenes whenever they need an adjustment of attitude—or pitch, altitude, or airspeed, for that matter. The autopilot controls the plane using an array of sensors—three axis gyros and accelerometers, a GPS receiver, pressure transducers to measure altitude and airspeed, and a magnetometer to determine bearing. All this connects through wireless communication with a personal-computer ground station, where the user can view information about the plane’s speed and location, as well as real-time video from the plane’s perspective.

This bird’s-eye view is vital for many people, including soldiers, farmers, search-and-rescue teams, and news reporters. Randal W. Beard, an associate professor of electrical and computer engineering and a project coordinator says the connection to real-world applications makes the project particularly exciting to work on. “It’s a project where you get to see things working, and you know it’s going to help people.” 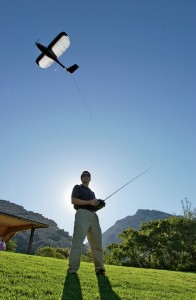 The planes are the product of years of research, cofunded by the Air Force Research Laboratories, to make UAVs less labor intensive and more responsive to real-life, real-time scenarios. “Right now it takes many operators to fly a UAV,” says Timothy W. McLain, ’86, an associate professor of mechanical engineering and a project coordinator.

The team’s goals were to develop micro-autopilot harware and software that would allow planes to automatically rechart their courses based on unexpected threats—and still accomplish their missions on time.

“It was all in computer simulation,” says Beard. “So, a couple of years ago, we said, ‘Why don’t we try doing this—actually fly these airplanes?'”With a limited budget, the team had to think small and inexpensive. What they developed was a light-weight UAV to house their processors and sensors. Modifying a computer board developed first for robot applications in BYU’s Multiple Agent Intelligent Coordination and Control (MAGICC) Lab, student engineers added the sensors and developed software for the ground station. The result is a total package that costs less than $15,000—incredibly low compared to current military UAVs, like the multimillion-dollar Predator.

And the students made the interface simple enough for just about anyone to fly the planes. “The board lets any operator, regardless of experience, launch the plane, fly it to a predesignated point, and land it for later use,” says McLain.

Student Reed S. Christiansen, ’01, a remote-control-plane enthusiast who designed much of the software, says even the novice aviator can avoid crashes with the plane. “The computer won’t let the plane be put in danger. If it gets lost, you just tell it to fly home.

“The students have also made it easy to switch back to a more hands-on approach, when desired. When the autopilot is off, operators can control the plane using a laptop, a personal digital assistant, or voice commands.

These factors make the planes accessible for just about anyone who needs a better view. “The plane can be deployed in any fact-gathering mission where you’d normally be forced to send up an airplane or helicopter—to check a battlefield, a farm, or a forest fire,” says Beard. “You remove many of the human and financial risks typically involved in that kind of venture.

“Impressed by BYU’s minimalist approach, Deryl Snyder, an aerospace engineer who works for Jacobs Sverdrup and does contract work for the Air Force, came to BYU to see a demonstration. “At the conclusion of the visit, I was convinced that this system was the solution for the Air Force Research Laboratory’s mini-UAV,” he says.

But before BYU’s autopilot could navigate the Air Force UAV—a featherweight called the Tactical Mini-UAV—the control mechanism needed to lose weight and size. With Air Force funding, Beard and his students adapted the hardware to fit the smaller airframe, which sports a 24-inch collapsible wing, making it possible to roll up in a tube.

When the smaller autopilot was ready for testing, three BYU students traveled to Eglin Air Force Base in Florida to fit the plane with BYU’s hardware and train Air Force personnel to use it. “They had made amazing progress,” says Snyder. “The system that originally weighed nearly one pound was reduced significantly in weight and was flying in our airframe.

“Validation came in August 2003, when the Air Force tested the technology in war games in Mississippi. The planes soared above expectations, proving very successful in tracking tanks and convoys and in allowing troops to see over hills and plan their movements. “They loved it,” remembers Christiansen. 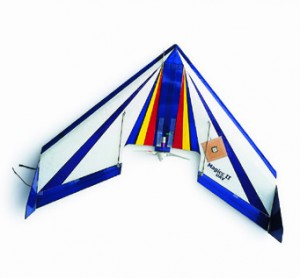 “We want to put a fleet of these in the sky for maximum coverage of an area and have the planes communicating with the operator and with each other.” – Tim McLain

While BYU’s engineering team fine-tunes its planes and works on additional sensors—including a height-above-ground sensor—it already has its sights set on a more perplexing class of “problems,” as McLain puts it.

“We want to put a fleet of these in the sky for maximum coverage of an area and have the planes communicating with the operator by way of the ground station and with each other,” he says.

“If you have multiple UAVs,” says Walter H. Johnson, ’04, an electrical engineering graduate student, “you can have them take off from a particular area and fly together until they get to their destination, and then break off and do their tasks.

“Along with the fuel-saving benefits of flying in a tight, flock formation, the planes could take a divide-and-conquer approach to their tasks, coordinating their trajectories and speeds to meet objectives at precise times and in a particular order, even when “pop-up” threats make on-the-fly changes necessary. It also would facilitate cooperative reconnaissance and search-and-rescue missions, where each plane is free to move around to cover an area thoroughly without spreading out too far or overlapping.

In engineerspeak, all such problems are part of “coordinated control.” The idea is to have many low-cost, simple machines work together to perform or even exceed the capabilities of one expensive and complicated machine.

These problems are being worked out not with airplanes in the sky but with small robots on terra firma in the Clyde Building’s MAGICC Lab. Using complicated algorithms, the student programmers and engineers are teaching the robots to communicate and work together in achieving tasks. From making a pass in robot soccer to rolling around in a tight formation, these robots are useful guinea pigs for theories of coordination and communication before they are applied to loftier scenarios.

“We’d like to get five planes up,” says Johnson, who developed the computer board used by the robots and modified it for the airplanes. “That would be really cool.

“In the meantime the team is pleased to have the ability to make one plane fly autonomously. “It’s great because we’re doing real application,” says Johnson, who hopes to work in control engineering after receiving his master’s degree. “We’re working with real projects. We study theory, but in this we get to develop a lot of real-world, practical applications that people will use.”