The animation program celebrates the completion of a new film and storyboards its future.

A gargantuan one-eyed alien was seen attacking a pajama-clad boy in the Harris Fine Arts Center in March. But not to worry: the boy, brandishing his blanky like a whip, held his own against this thug and three other extraterrestrial attackers.

The boy, Eli, is the protagonist of the BYU animation program’s new short film Pajama Gladiator, which premiered to a wildly applauding audience in the de Jong Concert Hall in March.

The five-minute film wasn’t the only reason for applause. The occasion was also marked by the announcement of BYU’s new Center for Animation, as well as by a visit from Pixar and Walt Disney Animation Studios president Ed Catmull, who delivered a speech and praised the animation program.

“Over the years, Pixar has worked with a lot of universities around the country,” says Catmull. “One of the interesting things is that, all of a sudden in the last few years, we’ve found that BYU has risen to the top. BYU has an extraordinary program here.”

The Center for Animation—announced before Catmull’s speech—will be housed in the Fulton College of Engineering and Technology.

“The center will allow us to develop more product, to have a better experience for students and faculty, and to explore other areas in animation and digitization that we haven’t been able to explore before,” says animation professor R. Brent Adams (’76), who will direct the center.

Its doors will even be open to non-animation majors. “We get inquiries all the time from faculty and students who have an interest,” says Adams. “They don’t want to change majors, but they have an interest in animation. There hasn’t been a good vehicle for them to have the experience.”

Since its inception seven years ago, the animation program has experienced phenomenal success, winning seven “student Emmys” and two Student Academy Awards. Pixar and other animation studios regularly hire BYU students for internships and full-time positions. According to Catmull, these students “come in and do production work right away and do a fantastic job.”

That success in landing jobs, in fact, presented one of the biggest challenges that the Pajama Gladiator team faced: “We lost half of our crew halfway through,” says director Glenn Harmon (BA ’07). “They got internships or graduated and got jobs . . . [at] Pixar, Digital Domain, Disney.”

Says Catmull, “It’s the perception, not just of Pixar but also of the other studios too, that something pretty remarkable is happening at BYU.” 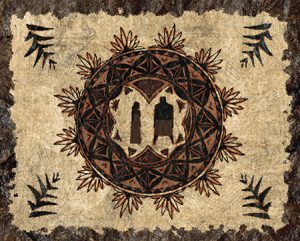 I Pronounce You Turtle and Shark

Romeo and Juliet, Tristan and Isolde, Dante and Beatrice—add to that list of legendary lovers a turtle and a shark, the protagonists of a new animated short created by animation instructor Ryan J. Woodward (BFA ’03) and four of his students.

Visually reminiscent of tapa cloth designs, the film is based on a Samoan legend about a man and a woman transformed by the gods into an eternal couple, forever to swim the seas side by side as shark and turtle. In May the animators traveled to Hawaii and Western Samoa to screen the film and teach workshops on visual storytelling.

Curiosity of the World

Art Rascon, news anchor at the ABC-13 in Houston, is an Emmy Award–winning broadcast journalist.

Members of the BYU community gather for the annual "Walk of Life."