Be ready to examine motives, build identities, and embrace differences.

When Kerri Haddock Wadsworth (BA ’89) and Mark A. Wadsworth (BFA ’92) realized they could not have biological children, they decided to adopt. “My dad has four brothers and sisters who are adopted,” says Kerri, “so I had always been around the idea of adoption. It was an easy decision for me and Mark.” Both white, they did not imagine then that 15 years later they would have five children—one black, two biracial, and two white.

In the United States, transracial adoption, where parents’ race differs from that of their adopted child (often white parents adopting black children), is increasing. While the race of a child might seem irrelevant to adoptive parents, it is not irrelevant to the children. They may often grow up in a community where they look different from everyone else, and that matters, say BYU adoption experts Jini Lyman Roby (BS ’77, MS ’84, MSW ’84, JD ’90) and Cardell K. Jacobson (BS ’66).

“We have a lot of disrupted adoptions [where parents return a child] because people see adoption as the happy ending and don’t understand the complexities involved down the road,” says Roby, a professor of social work. Roby was adopted at age 14 from Korea by white parents in Utah and has adopted two daughters from Korea. Jacobson, professor of sociology and coauthor of the book White Parents, Black Children: Experiencing Transracial Adoption, concurs that many adoptive parents enter this situation underprepared. Both professors say that families considering adopting a child who is not of their race should weigh several factors. 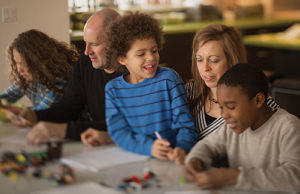 The Wadsworths teach their children that all people – no matter where they come from or what they look like – are children of a Heavenly Father who has a plan for them.

Transracial adoption is not for everyone, says Roby. If you are considering it, you would be wise to examine your motives. If, for example, you intend to accrue children of different races to show others that you value diversity, you could be on a perilous path. If you want to extend your love to children who need a family, regardless of race, you’re on a better trajectory.

“For people who are comfortable with diversity and are competent parents, this can be a very good thing for children,” says Roby. “A small percentage of people simply want a diversified family membership, and that’s fine as long as it’s not just to collect children and create a micro United Nations.”

For the Wadsworths, says Kerri, “race wasn’t a consideration. We just wanted a family.”

For parents who might seek an adoption in other countries in order to avoid having to maintain a relationship with the child’s family of origin, Roby and Jacobson advise against this strategy—for the child’s sake. Most domestic adoptions are now open, meaning that a child’s birth parents can keep in touch with him or her. The professors say this openness helps children create a solid foundation of identity.

“[Some people] think it might be confusing for a child to know his or her biological parents, but children benefit from this,” says Roby. “Their self-esteem is better, and their identity is better. They want to know where they came from.”

Can You Expand Your Identity?

Jacobson says it’s good for transracial adoptive parents to understand their child’s racial or ethnic group, but it’s even better if they can integrate this heritage into their own identity. “It’s not just—‘Oh, let’s go take a look at the black community’ or ‘Let’s drive through Koreatown.’ We call that doing a ‘drive-by.’ You have to immerse yourself in the group of your child,” he says.

Some white parents who adopt black children may believe their community is colorblind and they don’t have to worry about black identity issues. This thinking is naïve, says Jacobson, and it can harm adopted children. While such children might not experience overt racism, they will inevitably experience what researchers call “microaggression.” Parents see things through their own ethnic lens and can’t perceive this subtle racism—or help their child deal with it—without focused and concerted effort.

The Wadsworths’ black child, 9-year-old Cooper, has not reported any negative reactions from his overwhelmingly white peer group. He is, however, curious about his heritage and about others with his skin color. “We talk a lot about the city of his birth, Detroit. He tells people he wants to go on a mission to Detroit. . . . We talk about culture,” says Kerri.

To connect transracial children to their racial and cultural heritage, parents can have informal get-togethers with other transracial families, says Roby, or they can join more organized efforts. In some cases, they might have to do the organizing themselves.

“Culture camps” are an effective way to meet adopted children’s needs in this area. Roby directed the Korean culture camp in Utah for many years, and she believes it is a powerful identity builder. “You introduce kids to language, food, music, traditions. Our Korean kids learn how to make a full bow, all the way to the ground. They learn how it’s done, when it’s done, and how girls and boys bow differently.”

Roby also partnered with the Korean community in Utah. “They would invite us to a lot of their events, such as Korean Independence Day and Korean New Year’s celebrations,” she says. “We became a part of their community.”

Parents might also seek out mentors from minority communities so their child has someone of his or her own race to look up to. Mentors can counter negative stereotypes of a particular culture and help children with practical skills, such as how to take care of their skin or hair. “Some parents, for example, invite African-American hair dressers to teach their children how to do African-American hair,” says Jacobson.

Can You Provide Unconditional Love?

Good parenting means loving and accepting children unconditionally. The added dimension in transracial parenting, say Roby and Jacobson, is providing this love in a way that embraces differences rather than minimizing them in the name of family unity.

“Adopted children need a very strong family identity where who they are and how they look—everything—is accepted with respect and unconditional acceptance,” says Roby. “This means not telling a child, ‘Well, you have this biological side of your heritage that we don’t like, so we don’t want you to interact with that side.’ They need to feel they don’t have to be just like everybody else in the family: ‘There is room for me to be who I am—because I know that I am different. But at the same time I feel wholly accepted and wholly loved.’”

If parents deny that difference, thinking they can transcend it with love alone, that denial could be perceived by children as rejecting the reality of who they are. “They then will possibly seek that whole and unconditional acceptance somewhere else. And that becomes a tragedy,” Roby says.

Identity can become tricky when there’s no way to know a child’s ethnicity. The Wadsworths do not know the race of their 11-year-old’s biological father, and they are open about that with her. “She looks similar to our half-black child, but she could be Polynesian. We talk about everything with her—that we know her birth mom is white but have no clue about her father.”

For the Wadsworths, helping their transracial children establish a solid identity includes teaching them of their identity as sons and daughters of God. Kerri tells them regularly, “Wherever you were born and whatever you look like, you’re Heavenly Father’s child, and He’s helped you be in the situation you need to accomplish what you need to in your life. There’s a plan for you.”4

Sue Bergin is a hospice chaplain and author of the book Am I a Saint Yet? Healing the Pain of Perfectionism.

Zeroing in on the Millennium

Advice for those leery of the millennial year.

BYU researchers show how grandparents can influence their children’s children for good.

When Push Turns to Shove

Is your child being bullied? Here’s what to do.