Utah County’s Center for Change is a haven for women with eating disorders. 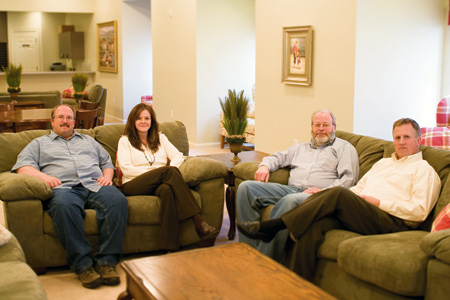 Sixteen-year-old Jill (name has been changed) had a supportive family, great grades, and a talent for singing. Her family considered her the perfect daughter and sister.

Yet beneath her happy exterior, Jill struggled with a consuming illness—anorexia.

Not wanting to cause her family concern, Jill kept her depression and feelings of being fat and unattractive to herself. She wore layered clothing to cover signs of her illness.

When her performance in a vocal competition turned into a disaster, she abandoned her dreams of a singing career. In time she began to feel that all she had to offer was a skinny body.

She succeeded in becoming thin, but her health deteriorated. Jill soon realized that her anorexia was out of control and that she couldn’t stop it on her own.

Jill found help in the Center for Change, a clinic in Orem, Utah, created to assist women battling anorexia, bulimia, and other eating disorders.

“Women with eating disorders, young or old, are often the most beautiful, kind, tender-hearted, and spiritually oriented people you’ll ever meet,” says Michael E. Berrett (BS ’78), CEO, director, and cofounder of the Center for Change.

“An eating disorder is not a disease; it’s an illness. It’s something that people can overcome 100 percent.” –Michael Berrett

In the mid-1980s, Berrett and fellow psychologists Harold A. Frost (BS ’75), Julie B. Clark (BS ’79), and Randy K. Hardman (BS ’78) established an outpatient private practice for general psychotherapy. They were later joined by medical doctor David K. Anderson (BS ’80) and his brother Jeff Anderson. In 1994 they established the Center for Change to help women and adolescent girls struggling with eating disorders. The program includes a full continuum of care, from an inpatient facility to a residential program (with a high school curriculum) to day treatment to outpatient psychotherapy.

“We established the Center for Change because it was needed,” says Berrett. “There wasn’t a comprehensive, intensive program of excellence treating eating disorders in the Intermountain West.”

The founders say there is an increasing need for places like the Center for Change. “The statistics for eating disorders are growing nationwide,” says Hardman, noting that eating disorders are becoming more common among younger women. “In a recent study of high school students, we found that about 8 percent already have a diagnosable eating disorder and another 18 percent are at risk for developing one.”

Despite this trend, those at the Center for Change offer optimism. “There is hope. People really do get well,” Berrett says. “An eating disorder is not a disease; it’s an illness. It’s something that people can overcome 100 percent.”

“An eating disorder is an addiction,” says Clark. “It doesn’t mean a person is bad; the person is trying to cope using strategies that don’t work. Recovery from addiction takes time and patience. It is a hard road for many of these women to battle through and reach recovery. But we know women can recover.”

Speaking of people like Jill, Berrett says, “If we can save one girl from premature death or from a life of self-hatred, anything we could do will have been well worth it.”

When her daughter Sophie showed signs of multiple food allergies, Emily Hendrix got creative and made a cookbook.