By Jamie Montague Callister ’03 in the Spring 2003 Issue 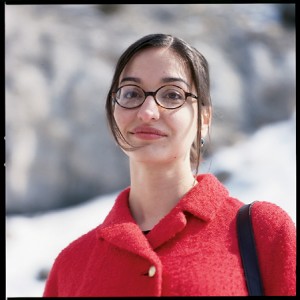 MARIA stood confidently in front of her Russian culture class, delivering her presentation on some of the artistic techniques used in ancient religious icons. As she described the specific composition of the faces—the classic look of the eyes, position of the mouth, and traditional shape of the nose—her teacher couldn’t help but notice something. After Maria finished, her teacher stood and expressed her observation. “And now, class, take a look at Maria,” said Raisa V. Solovyova, assistant professor of Germanic and Slavic languages. “Her face has the same shape, impression, and structure as the face of a Byzantine icon.”

This may have been an embarrassing moment for Maria Petrova Ilieva, ’03, but Solovyova stands by her observation. “Maria has a very spiritual face that reflects her deep soul and profound way of thinking. She is also very talented in different languages. She doesn’t just study them—she really knows them well.”

Ilieva’s love of languages led her to the Church of Jesus Christ. The missionaries were teaching a German class at her high school in Smolyan, Bulgaria. Although she already spoke three languages, Ilieva felt a need to speak and study with the elders in their native language—so she taught herself how.

“I learned English by reading the Doctrine and Covenants,” says Ilieva. “I would underline words I didn’t know, and at first almost every word was underlined. Then towards the end, nothing was underlined.”

A service-missionary couple recognized her potential and sponsored Ilieva’s education in the United States. She quickly moved on to other languages, adding French, Italian, and Polish to her fluent Bulgarian, Russian, and German.

Ilieva began the undergraduate English major at BYU with a course in modern American usage taught by Don E. Norton, ’59, assistant professor of English. He saw in Ilieva a talent unusual in international students: editing in English. Ilieva laughs when she recalls, “He was a little wary at first. But then he was happy with my work and kept me on.”

Ilieva has worked as Norton’s principal editor on faculty papers for more than five years. She has also edited for FARMS and various student publications, including Germanic and Slavic Journal Writings. She is currently teaching English 115 as part of the master’s program in comparative literature.

Words alone can convey truth, but they are more effective when beautifully presented. With this in mind, Ilieva will also graduate in August with a BFA in graphic design. According to her, graphic designers have the unique opportunity to express truth and beauty. “Things need to be beautiful in order to be appreciated,” she says.

She believes that designers inherently carry a tremendous responsibility. In Eastern Europe, graphic design has a long tradition of communicating socially relevant messages that have changed the course of history. “You are given a voice and an audience; you choose whether to uplift or oppress.”

Last summer a New York firm welcomed Ilieva as an intern in green design, a discipline that centers on environmental sustainability. For two months she was immersed in designing a photography exhibition called “Rewarding Lives” at the World Financial Center near Ground Zero. “The exhibition is a very healing, restorative, and uplifting experience,” says Ilieva. “It uses natural light spectrums and shapes inspired by pebbles and seashells to create a protective and warm atmosphere.”

In time, Ilieva would like to establish a career in graphic design and eventually teach at a university. “School is an opportunity to find yourself—or even better, to make yourself into someone who can communicate and be of use to others.”

Sit in on a lecture connecting the great George Cantor’s Theory of Infinity and Christ’s infinite Atonement.

A Little Bit of Dark

When this alumna felt hopeless, her brother's words reminded her that life and light will come.