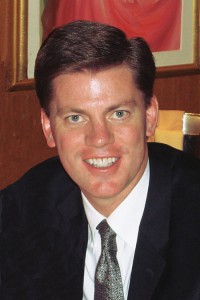 A few philosophy courses during what might have been his final semester at BYU sparked James L. Ferrell’s (BA ’89) interest so much that he postponed his graduation to complete an additional bachelor’s degree in philosophy, a choice that ultimately changed his career path.

“I was enthralled by what I learned from Terry Warner (BA ’63), my philosophy professor,” Ferrell says, “and I became increasingly interested in his work regarding self-deception, which is the challenge of not knowing you have a problem.”

This interest continued while Ferrell pursued a law degree at Yale University. As he studied legal cases having to do with race relations, it occurred to him that the hallmarks of self-deception are everywhere. His thoughts led to a year-long writing project on how self-deception can explain current and historical problems between races. The resulting paper crystallized Ferrell’s passion for the ideas he had learned from Warner.

Ferrell graduated from Yale in 1992 and joined a major law firm, where he worked for three years before again crossing paths with Warner. Warner convinced Ferrell and two other former philosophy students, W. Duane Boyce (BS ’74) and D. Paul Smith (BS ’74), to leave their jobs and join him in the development of the Arbinger Institute, which helps organizations, families, individuals, and communities worldwide solve problems created by self-deception.

Ferrell, a coauthor of the institute’s books, Leadership and Self-Deception (2000) andThe Anatomy of Peace (2006), wrote his own book, The Peacegiver, in 2004. The Peacegiver explores self-deception from a gospel perspective. Ferrell wrote it in story form, hoping that as readers identify with the characters they will learn about change and then experience a personal change of heart. “The Atonement is the mechanism by which God and man are rejoined, but it’s equally the mechanism by which people are joined back together. It’s how our differences are overcome,” Ferrell says. “To clearly speak about peace, you must turn to the source, the Prince of Peace.”

A peacemaker by nature, Ann Romney has found her voice on a national stage, fighting for the causes she believes in.

Ask an Expert: Wise Up, Voters

How can I fact-check questionable information? Can I just vote along party lines? Does my vote actually count?