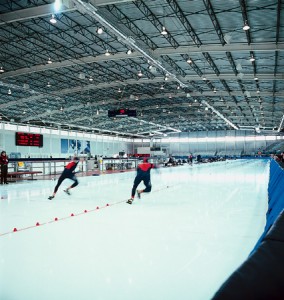 BYU graduate Management students created a business plan for the post-Olympic use of the speed-skating oval and other 2002 Olympic venues.

IF you owned a $30 million, 400-meter speed-skating oval, what would you do with it? That’s the question the Salt Lake Organizing Committee (SLOC) will encounter after the closing ceremonies of the 2002 Olympic Winter games. Faced with the challenge of making Olympic venues profitable after their intended purpose has passed, SLOC turned to graduate students in the Marriott School of Management for help.“The field studies program is essentially a consulting firm within the business school,” explains Mark D. Thomas, director of field studies for the Marriott School. “Large corporations like Intel, Kennecott, and BMW come to BYU for consulting work. We have premier faculty and students whom I would match up against any school in the country.”In the case of the Olympic speed-skating oval, a team of six students devised a business plan that outlined the costs and revenues that could be generated through future use of the facility. Mark D. Hancock, ’99, who worked on the project as a student and is now a financial analyst with Ford Motor Co., says, “We needed to determine who would be likely patrons and what kind of products and services they would want. After comparing our oval to other Olympic ovals in Calgary and Wisconsin, we proposed ways to minimize operating costs and to make money beyond public skating.”According to Nick J. Thometz, director of the Utah Olympic Oval and three-time Olympic speed skater, the BYU team helped develop and elaborate preexisting plans to open the oval to public use. Their list of ideas ranged from including a pro shop and concessions stands in the complex to forming a partnership with a fitness center nearby. “The students’ work helped make this facility a benefit to the community in more ways than one; this isn’t going to be just a skating rink,” says Thometz. “It will house everything from hockey leagues to a Spirit of the Olympics store.” The full complex should be open to the public shortly after the Olympic Games conclude.Several other teams from the Marriott School also worked with SLOC to analyze the profitability of additional venues, including Soldier Hollow and Utah Olympic Park.

Clarence Robison cherishes the experiences he had as an Olympic athlete in 1948 and as a torchbearer for the 2002 Games.