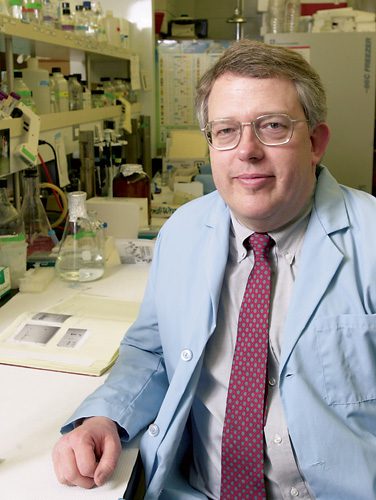 “Aspirin-free” drugs treat pain and fever, but scientists aren’t sure how they work. A study by Daniel Simmons (above) may have uncovered the enzyme the drug affects.

FOR decades, millions of physicians have advised their patients to take acetaminophen—the drug behind “aspirin-free” pain relievers like Tylenol—without understanding how or why the popular medicine works. Now, a new BYU study has discovered what could be the enzyme the drug attacks to relieve pain. “We have found a previously unidentified enzyme that is inhibited by acetaminophen,” says Daniel L. Simmons, ’78, professor of biochemistry, whose study is reported in the prestigious journal Proceedings of the National Academy of Sciences. “Hopefully, this enzyme, COX-3, is the target of this drug that inhibits pain and fever.” Scientists did not know until 1971 that aspirin works by inhibiting an enzyme called cyclooxygenase (COX), a discovery that earned British scientist John Vane a Nobel Prize for medicine in 1982. Simmons’ lab was the first to determine that there are actually two COX enzymes (PNAS, April 1991, 88:2692-2696). COX-2 is the culprit responsible for pain, fever and inflammation, but COX-1 has the positive effect of protecting the gastrointestinal tract. That finding resulted in a new generation of pain and inflammation relievers called COX-2 inhibitors that include Celebrex and Vioxx. “Since the discovery of COX-2, we have learned an enormous amount about how aspirin drugs work,” says Simmons. “However, a number of questions, such as the mechanism of acetaminophen, have remained elusive. Going beyond the paradigm of COX-1 and COX-2 and asking whether there is any more complexity to the story has been difficult. For us, this is a good start.”

Once a flood victim herself, BYU student Anelle Concepción now uses her studies to protect communities from floods.

Chew on This: Bytes Can’t Do It All

The pure theory of BPR is to design a new system that is not bound by the old system.