As an orange sun sinks behind rocky peaks in the land of Butch Cassidy and the Sundance Kid, Larry L. St. Clair, ’74, carefully searches the rugged landscape for one more lichen sample before daylight runs out on him. Hunched over, he finds the lichen just where he expects—clinging tenaciously onto craggy rocks. Victorious, he will return with his treasures to his academic headquarters in the Monte L. Bean Life Science Museum at BYU, where the unlocking of biological secrets begins. To St. Clair, professor of integrative biology and department chair, unpretentious lichens contain much more than what meets the eye. 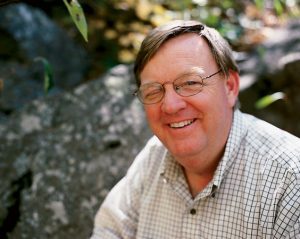 In bringing together three of his top interests–biology, the outdoors, and family–Larry St. Clair has established himself as one of the foremost lichenologists of the West and an important advocate for the environment. Photo by Bradley Slade.

The casual observer usually overlooks these humble organisms, symbiotic mixtures of a fungus and either an alga or a cyanobacterium. Lichenologists such as St. Clair, however, know that lichens provide us with much more than ubiquitous decorations for outdoor surfaces. Since the 1860s, scientists have been examining the correlation between the amount of lichen in an area and that area’s overall environmental health.

In more recent times, and with the help of sophisticated techniques, lichens have become one of the foremost environmental tattletales. Under careful examination, called elemental analysis, lichens divulge an array of information on the surrounding area’s air quality, making lichens ideal biomonitors of air pollution.

“They don’t have roots, so they don’t take things up from the soil,” St. Clair says. “Most everything they get in terms of water and mineral nutrients comes from what is washed out of the air.”

Each year, and particularly in the summer, St. Clair and his students tromp all over Western national parks and forests collecting lichens at biomonitoring reference sites. His extensive lichen collection and research innovations have made him a top lichen expert for the Rocky Mountain area. “There are over 450 sites in the Rocky Mountain corridor. We’ve collected almost 1,000 elemental-analysis samples,” says St. Clair, an avid hiker and outdoorsman. “The Rocky Mountain corridor has more air-quality data in terms of lichens than about any other region in the United States.” 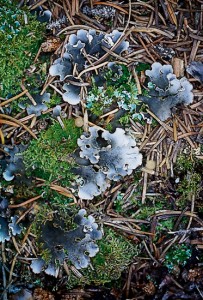 Nearly ubiquitous, the lichens of the world range from the nondescript to the flamboyant. Photo by Larry St. Clair.

His efforts haven’t gone unrecognized by colleagues. “Larry’s years of dedication to lichens in the West have resulted in BYU having one of the best lichen herbariums in the world,” says Lloyd R. Stark, an assistant professor of biology at the University of Nevada, Las Vegas, referring to the St. Clair–curated Herbarium of Non-Vascular Cryptograms in the Monte L. Bean Life Science Museum. “His specimens are not only numerous but among the finest-curated collections I have ever seen.”

The extensive process of locating, collecting, and analyzing lichens attracts students and professors from all over campus and from around the country. “St. Clair is the key to it all,” says Nolan F. Mangelson, ’63, professor emeritus of chemistry and biochemistry. “He brings everyone together.” Mangelson’s role is to put the lichen samples through a process called proton-induced x-ray emission, which reveals metals and other polluting elements hidden within the fungal life-form.

St. Clair’s love for botany was cultivated by his mother, whose hands were always in the dirt. “She’s always loved gardening and plants. Early on, she involved me in that process,” he remembers. “I have this built-in appreciation of plants. It’s never lost on me that, with every breath I take, I benefit from a plant.” 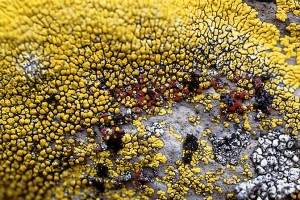 “[My mother has] always loved gardening and plants. … I have this built-in appreciation of plants. It’s never lost on me that, with every breath I take, I benefit from a plant.” –Larry St. Clair

This respect—and St. Clair’s fascination with lichens, in particular—has been passed on, in turn, to his son Samuel B. St. Clair, ’98, who has worked side-by-side his father since he was 6. “In the beginning I was just good company, but as I grew older I contributed more and more to the science being done,” he says.

Childhood outings turned into professional pursuits, and the two St. Clairs recently made a major breakthrough in linking lichens to environmental quality. For years, scientists have worked with the assumption that a high level of a polluting element in a lichen correlated with a high level of the pollutant in the surrounding air. “You could make indirect assumptions,” says Larry, “but there had never been any data generated where you could say emphatically that you could correlate what was in the lichen with what was in the air.” 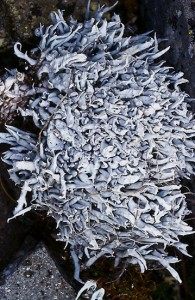 With solid data in hand about already-known pollution levels in the air, the pair began a comparison by analyzing lichens. The lichen samples from four locations in the West yielded telling data on the pollutant levels. “We were able to clearly show that the copper in the Arizona lichens was directly correlated with what was in the air,” Larry says.

Using lichens to pin down the level of air pollution in an area has had economic as well as ecological repercussions. When a coal-burning power plant was proposed for a small forest area of Virginia where St. Clair had taken lichen samples, his research was used to determine what environmental strains already existed in the area.

“We determined the lichens were carrying high loads of fluorides and sulfur. There were already some existing sources of pollution,” St. Clair says. Partly because of his findings, the power plant idea was tabled under pressure from the federal government. 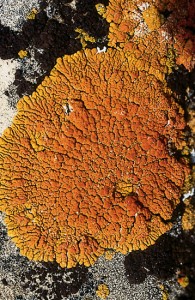 “If you don’t have the data, you can’t demonstrate that the organisms are saying there are pollution problems—then you’re out of luck. In that particular instance, the data was fundamental to having the federal government put pressure on the state to make the best decision.”

Such results are heartening for St. Clair, who feels a sense of stewardship for the plants and animals of the earth. Pulling a set of scriptures from his shelf and thumbing to Doctrine and Covenants 59:18, he reads that the things of the earth “are made for the benefit and the use of man, both to please the eye and to gladden the heart.” St. Clair says people, plants, and animals have a very real connection. “Certainly we have a preeminent role in the system, but they have a role too. They should command our respect, appreciation, and love.”

St. Clair conveys this love for things botanical through his classes, his collection, and his research. And he hopes it all leads to a good cause. “I think of trying to make a difference at a scale I can make a difference in. If I can make some kind of difference in the western United States or leave some kind of legacy in air quality, that will be great. It’s not very often the scientist has the opportunity to step back and say, ‘There is something I can do here that would be of lasting benefit way beyond my time.'”