Darlene Seachrist entered the Sacred Grove in July with members of a BYU Alumni Association tour visiting Church sites in Ohio and New York. The Pennsylvania bus driver swatted her arm several times, and when she left the grove, she said that what she had thought was a bug or a leaf landing on her arm was really her hairs standing on end.

“Wow, there’s a lot of energy in the grove,” she said.

If the evaluations of the tour participants are any indication, there was a generous amount of energy and spirit everywhere. Some participants studied the gospel on site at Kirtland, Palmyra, and Cumorah, while others visited sites in and around Nauvoo and Independence.

Roughly 800 alumni and friends responded to an invitation to travel with the Alumni Association in July and August on tours that would highlight, among other stops, the Hill Cumorah Pageant, the City of Joseph Pageant, and the Nauvoo and Palmyra temples.

The 14 tour buses accommodated families, reunions, couples, and, in one case, a group from the Sons of Utah Pioneers. 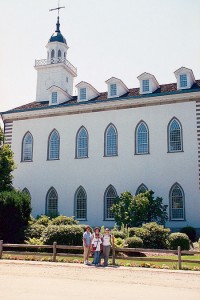 “My own tour was delightful,” said Reid A. Robison, ’75, the director of alumni tours who was a host for one of the trips. “With our discount airline packages, bus arrangements, and negotiated hotel prices, we have come up with a five-day, four-night trip that families probably cannot do on their own for the same price. A bonus is our tour hosts who spend considerable time learning Church history, doctrine, scriptures, and information about the regions we visit.”

“I was so empty before I came,” wrote one tour participant. “Now that I have been on this tour, I’m filled and I can go forward again.”

Michael J. Cunningham, ’95, had a bus driver, Doug Everett, who attended church with the tour and went to the City of Joseph Pageant. “He had tears in his eyes when we left for home and hugged most of the members of the bus,” Cunningham said. “We named our bus the Heritage First Ward and had Doug be our bishop. He was good natured and suggested that he might have to call us all to repentance.”

Each bus developed its own personality, but the common thread was that by the end of the tour, a great sense of camaraderie had developed among the participants, said Robison. Paul R. Warner, ’65, and Karen Kuehne Warner, ’68, for example, were hosts for a bus that gave them unanimous excellent ratings. Typical was the experience of Denise Madsen, who wrote, “This is my third tour with the Warners and they are fabulous. The tours are fabulous, the directors are fabulous, and the company is fabulous.”

When asked why the Alumni Association started a Church tour program, Robison replied, “I see it as a tremendous service from the university for families, friends, and others to gather at sacred sites. Relationships are what the Alumni Association is all about. We have an aspect of sharing that occurs in an environment when people are reminded of our pioneer heritage and the great sacrifices that were made on our behalf.”

Don W. Petrol shared a similar sentiment: “This was one of the greatest experiences of my life. My understanding of and gratitude for the early saints grew. I loved learning the gospel with my wife in such a wonderful setting with a great group.”

BYU sociologist Brian K. Barber tells of visiting a class of 14-year-old boys at a school in Rafah.