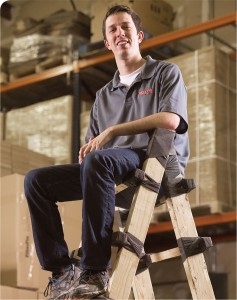 Spencer Quinn perches on a ladder crafted with his wonder tape.

As student entrepreneur E. Spencer Quinn (’14) walked onto the set of ABC’s show Shark Tank, he could almost hear the Jaws theme. “It was the scariest thing I’ve ever done,” he says. His task: sell a panel of no-nonsense investors on his product, FiberFix—a “duct tape on steroids” that can repair items from shovels to umbrellas to pipes. Producers had warned him that “as much as a good pitch makes great TV, so does a bad one,” says Spencer. “I wondered, ‘Why did they invite us? Did they think we were a good company or a bad one?’”

The former, it turned out: the sharks bit on Spencer’s pitch, and he walked out with a $120,000 deal to help grow the company he and his cousin Christopher Quinn (’14) built while juggling homework and finals at BYU. The day after Shark Tank aired, 45,000 FiberFix packs sold on QVC. In December their business model won the Global Student Entrepreneur award, beating out 1,600 submissions from 37 countries. The product is now on the shelves of Home Depot, Lowe’s, and independent hardware companies across the nation.

It all started when Spencer, a biotechnology student, and Chris, a mechanical engineering student, heard about a doctor repairing an ATV using medical tape for casting broken bones and wondered if they could use it to create “casts” for broken tools. They pulled in economics student Derek B. Rowley (’14) and started brainstorming applications for such a tape. Nearly 100 prototypes later, they have a waterproof wrap that can withstand 3,000 pounds of pressure, confirmed with the hydraulic press in BYU’s mechanical engineering lab: “We had lots of fun breaking stuff,” says Spencer. “Sometimes in testing, the galvanized steel pipes start to bend under high pressure before the FiberFix breaks.”

FiberFix ended its first year worth $2.9 million. “This level of success this early is quite unique,” says Scott R. Petersen, director of BYU’s Rollins Center for Entrepreneurship and Technology. “But in terms of . . . launching incredible business ideas, it’s not unique; we have a lot of that going on at BYU.”

The Rollins Center, housed in the Marriott School, was recently featured in Forbes for helping students graduate with profitable business ideas along with their degrees—and not just business majors. The center offers courses, training, mentorship, and access to world-class competitions to help students in all disciplines, as Petersen says, “commercialize their education.” Student businesses like the Quinns’ are finding real success: Dark Energy, a business selling portable chargers, snagged $173,000 in crowdfunding last year and sold more than half a million dollars worth in product. Underwater Audio, a company that waterproofs iPods, won the 2013 Utah Student 25 Competition and ended the year with $3 million in revenue.

As the Quinn cousins prepare to graduate, the business continues to expand. Next up is a heat-resistant wrap for auto repair, a green-colored tape to match garden hoses, and a FiberFix patch for, well, you name it.

BYU's impressive women take soccer to the next level with a historic top-eight finish.

This spring breathes life into the interior of the Gordon B. Hinckley Alumni and Visitors Center.