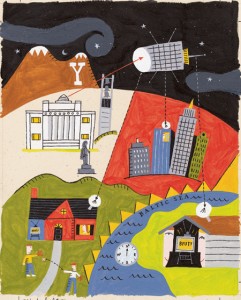 Through satellite technology, BYUTV has expanded the university community by millions. 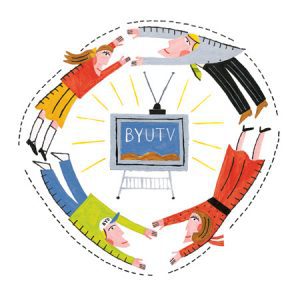 Extending BYU’s ReachPresident Bateman sees BYUTV as a dramatic example of the potential for technology to overcome the limited physical capacity at BYU‘s campuses in Provo, Idaho, and Hawaii. Through BYUTV, the university may eventually offer its scholarly and religious expertise to anyone with access to satellite or cable television.“First, we want to do things very well on campus,” President Bateman says. “That is our focus. But at the same time we believe BYUTV offers an opportunity to create a community of viewers around the country who are connected to BYU.”With major pieces of the infrastructure in place, BYUTV is focusing on refining program offerings. President Bateman says BYU knows that people want to see Education Week and Women’s Conference, and those programs will continue to be offered. But now, BYU is devising ways to increase the cultural events, classroom discussions, athletic events, and other campus activities shown on BYUTV. Because of the Mountain West Conference’s contract with ESPN, however, most men’s basketball and football games are not broadcast live but are shown on a tape-delayed basis.Some religion courses may be offered on BYUTV, but the Internet will continue to be the primary delivery method for those seeking degrees through distance learning. BYUTV officials foresee a broader purpose for the network than serving only those seeking diplomas.“We can take advantage of BYU‘s three campuses to improve learning on all levels, not just in degree-seeking programs,” Reim says. “We can use the resources ofBYU to help families manage their finances, to help parents communicate with their teens, and to build family unity. BYU has experts in all of those fields, and we can be a resource to bring this expertise to families.”BYUTV also broadcasts general conference (live and tape-delayed), classic Latter-day Saint short films like Johnny Lingo, and documentaries on such Latter-day Saint luminaries as artist Minerva Teichert. BYUTV has broadcast the PBS documentary American Prophet: The Story of Joseph Smith and the Light of the World, which was presented at the Conference Center during the 2002 Olympic Winter Games.BYUTV officials see the opportunities for content as virtually endless. This year, BYUTV will add 30 hours of broadcast time for dramatic productions from the College of Fine Arts and Communications. Eventually, a news magazine show could profile BYU professors and their research.BYUTV has forged a partnership with caretakers of the Church’s audiovisual archives that will, according to Reim, bring to BYUTV the kind of content viewers want. Church employees and volunteers are currently combing the Church film archives, Church Educational System productions, and content produced for such places as Church visitors centers to determine what programming would fit BYUTV‘s needs.The Church is “an important content partner because that’s what the viewers of this channel want,” Reim says. The Church has also agreed to look for ways to produce future content that will be appropriate for and made accessible to BYUTV. “BYUTV is not the only delivery method for BYU and the Church, but it is an important one,” Reim says.One highly popular type of programming involves BYU religion professors engaged in scriptural discussions with one another. Sixty-four half-hour episodes on the Book of Mormon have been produced, and more are planned with other books of scripture.“You just come with your scriptures and they say, ‘This is what we’re talking about today,'” says Camille Fronk, ’86, a BYU assistant professor of ancient scripture and one of the participants in the on-air discussions. “Then the cameras roll. The spontaneity allows more people to contribute and more ideas to be shared in a short period of time.”Above all, BYUTV represents the best of BYU. In that sense, it cannot be classified as either wholly academic or wholly religious.“I think it’s both,” President Bateman says. “I think that’s where the power comes from. It represents the university because our major thrust is to have academic excellence in a religious environment.”

Ed Carter is a student at BYU‘s J. Reuben Clark Law School.INFO: Up-to-date information about getting BYUTV, as well as an in-depth program guide, is available online at byutv.org or by calling 1-866-662-9888.BRINGING BYUTV TO VIEWERS LIKE YOU

A Boundless Field of Truth

BYU Magazine presents a sampling of the Brigham Young's teachings on education.

When diligence turns to inappropriate zeal, the consequences can be damaging.

When Kazakhstan came with nothing, BYU saw opportunity to give and share love.