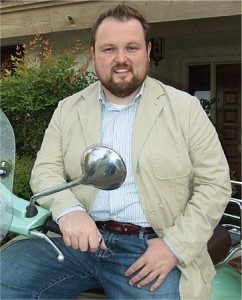 Continuing the pattern he set at BYU, David Johnson serves in his community while pursuing his career.

It was March 2004, and some 22,000 spectators were packed in the Marriott Center for the BYU-Utah men’s basketball game. During a break in the game, the Cougarettes jumped to mid-court to perform a number. Suddenly, a familiar figure darted onto the court in the middle of the dance. There, David A. Johnson (BA ’04), the 2003–04 BYUSA president, flaunted his hip-hop moves in a solo of his own. After a few moments he slid in line and finished the performance in sync with the Cougarettes, careful to not miss one choreographed step. The crowd went wild.

Johnson’s unreserved energy for life and, debatably, his dance moves, made him an approachable and popular man on campus. “The best thing about being BYUSA president was that I had the right to be interested in what students were doing,” he says. “I could walk up to any student and start chatting.”

After graduating in 2004 Johnson helped his brother reorganize a residential cabinetry company in Mesa, Ariz. “I caught the bug for entrepreneurship,” he says. But Johnson hasn’t forgotten politics. As a precinct committeeman in his legislative district, Johnson serves as the local-issues chair. He has also been involved in voter-registration drives and fund-raisers in the Mesa area. “Politically, I’m concerned about how much we focus on winning arguments instead of solving problems,” he says.

In spite of his busy schedule, Johnson still finds time to return to his alma mater. A former member of the BYU a cappella group Vocal Point, Johnson has served as chair of the Vocal Point affinity group for the past three years. In 2005 he emceed BYU’s A Cappella Jam, and in 2006 he traveled with Vocal Point to New York City, where the group placed first in the International Championship of Collegiate A Cappella.

“At BYU I had the opportunity to work toward academic achievement while at the same time serving in the community and giving back,” Johnson says. “I had a lot of fun as BYUSA president, going to freshmen events and dancing with the Cougarettes, but I also learned a great deal. I’m grateful for the mentors I had who gave me a head start on life.”

Obi-Wan Kalani Sitake and the Jed-Ty Detmer put their light sabers to good use.

With a Little Bit o’ Luck

Meet the Dickamores. Their honeymoon took them on the road as cast members.

Y Views: To the Deserts of Arabia and Beyond

Being a geology professor gives Benjamin R. Jordan the chance to travel.