Alumni use humor and animation to teach values. 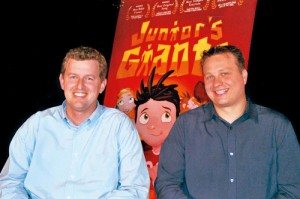 Building on their experience in a BYU comedy troupe, Randy Davis (left) and Mike Rasmussen (right) set out to create funny children’s videos that teach values. The hero of their stories is Junior (top), a self-declared elementary school genius.

Two alumni who spent much of their college years making other students laugh now hope to do the same for families with a series of cartoons that use humor to illustrate right from wrong. Called Junior’s Giants,the cartoons spring from the imagination of Michael J. Rasmussen (BS ’97) and Randall S. Davis (BA ’98), founding members of Divine Comedy, a popular BYU comedy troupe. 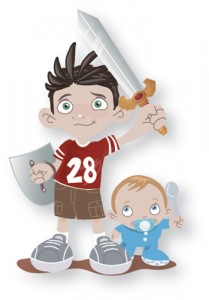 “It was such a high to entertain people at BYU and make them laugh,” says Rasmussen. “After I graduated, I missed it tremendously.” Although both friends rank humor among their greatest strengths, they each pursued different directions after BYU. With a degree in computer science, Rasmussen began working in the video industry. Davis became vice president of distribution for Excel Entertainment in Salt Lake City. But the two kept in touch and hoped to eventually find a joint venture that used their comedic talents.While pursuing an MBA from Duke University, Rasmussen completed an independent study project on how to create a series of children’s videos that would have a religious or moral message and be entertaining as well. He put together a financial and marketing plan and called his friend Davis.“Mike and I have an overwhelming and even irrational sense of optimism,” Davis explains. “He calls with an idea, and my answer is almost always ‘Yes, we can do this.'”“We knew we had the chops to make something funny,” Rasmussen adds. “Through Divine Comedy we developed the language of comedy and learned how to perform it.”The theme of Junior’s Giants is that everyone faces giants, or challenges, and it features a self-declared elementary-school genius and his whimsical family.The first DVD, released in September, is called Anger’s Everywhere and has Junior dealing with his tantrums. The giant with whom he must contend is Tude, short for “attitude.” Helping him are a caring father, obsessed with the family’s recently installed toilet, and his mother, who keeps an organization chart she reconfigures continually. Supporting characters are a sister to rival Donald Trump, a baby brother who loves anything dangerous, and Niko, Junior’s loyal and levelheaded friend.In making the story, Rasmussen and Davis maintained that while the message was serious, the story had to be funny. “I observe two extremes in the children’s market,” Rasmussen says. “At one end are cartoons with no goal beyond entertainment and the other are value-laden products that are pretty didactic.”Rasmussen and Davis assembled their core team from the ranks of BYU alumni: Marc A. Rasmussen (BA ’03), director of animation; K.C. Blake (BA ’00), sound engineer; Rocky T. Davies (’01), art director; and Lyle A. Durland (BM ’94), composer.The team will release its second DVD in the spring. The series is intended for children but may engage the entire family, especially adults, as one reviewer said, “who still eat Frosted Flakes.”See juniorsgiants.com