When dads are more involved with kids, both moms and dads are happier.

Before Brett C. King (BS ’88) became a father, he thought his future children wouldn’t be interesting until they could throw a ball. But since fathering twins and then triplets in the last seven years, he’s had to become a super-involved father—and he’s anything but bored. “The triplets had to be fed every two-and-a-half hours, and I sometimes took the night shift. What a beautiful, sacred experience it was to hold a baby so close to me and have him fall asleep in my arms—just me with my baby in the quiet of the night,” says Brett, a California State Park Ranger in central California.

Betsy King loves that her husband shares so much in child care. She wouldn’t mind him taking more responsibility for housework, but his closeness to their children is what matters most to her. “He has a great bond with all of them,” says Betsy, who works half-time for a property-management company via telecommuting. “That means more to me than anything.” 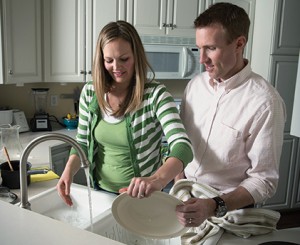 Brett and Betsy are both mostly happy with how they share the workload in their home, and they feel they have a strong marriage. Their experience illustrates the findings of a recent study by School of Family Life assistant professor Erin Kramer Holmes (BS ’98) and her former student, Adam M. Galovan (MS ’10), now a doctoral student and graduate instructor at the University of Missouri. They found that when husbands are more involved with child rearing, both they and their wives are more content with the division of labor and, in turn, both report higher-quality marriages.

“The division of labor is not just about whether or not Dad does the dishes,” says Holmes. “It’s about Dad caring well for his children.”

Research has long shown that disagreement regarding the division of labor in the home is a common theme in marital conflict. Studies, however, have mostly focused on fairness by measuring time spent on family work by men and women. Holmes and Galovan wondered if the concept of satisfaction—regardless of who spent how many hours doing what—might also yield insight. “Couples may have different ideas about how they want to construct that division. Instead of believing there might be only one right way to divide household responsibilities, we wondered if satisfaction with whatever division you’ve constructed in your marriage might be a better approach to this research,” says Holmes.

Drawing on a dataset previously gathered by colleagues at Utah State University, Holmes and Galovan teased out findings regarding 160 couples married five years or less. Their article, published in the Journal of Family Issues, reports that unequal division of labor does not necessarily mean dissatisfaction: In cases where both moms and dads said that Dad was involved with child care, both were also much more likely to be satisfied with the division of labor and, in turn, to report a higher quality of marriage.

The researchers hypothesized that when men take on more routine work, which is usually done by women, their wives will be more content. Routine work is defined as labor that has to be done every day or multiple times in a single day, such as doing the dishes, making a meal, and straightening up. Periodic work can be done on the weekend or intermittently, such as mowing the lawn or paying the bills. “We thought, ‘Surely women are going to say their satisfaction with the division of labor has something to do with whether or not their husbands are sharing routine tasks,’” says Holmes. But the data did not bear that out. “It wasn’t at all about routine vs. periodic work. It was about whether or not Dad was involved in child care. We were really floored by that.”

It appears that women see caring for children as more important than daily chores, so when Dad is doing things like reading to the children, bathing them, and playing with them—whether he’s also vacuuming or not—then Mom is happier in her marriage. Holmes hopes that the finding doesn’t give dads reason to slack off on routine chores, but she does believe child care is key.

“For me, the take-home message is ‘Dads, be involved with your children. Have a quality relationship. This is good for your wife, and it’s good for you and your relationship with her,’” says Holmes.

Holmes and Galovan’s study reflects previous research that shows women generally are more relational than men. For example, women see giving children their baths as not just a task that must be done but as work that’s needed to care for their loved ones. The playing and interacting that typically goes on during bath time are an opportunity to bond and strengthen the parent-child relationship.

Betsy King shares this view. She enjoys watching her husband play with their children, especially during their nightly ritual as she prepares dinner. It is Brett’s job to keep everyone out of the kitchen so Betsy doesn’t have “five kids hanging on [her] legs,” and she looks on with contentment as they interact. She does wish her husband would more often see chores that need to be done and do them without her asking. “I’m the conductor. I might not do all of the work, but I orchestrate it, and I feel ultimately responsible for it. Brett is in charge of the kids while I work [about 20 hours a week in their home office], and he does a great job with them, but there’s no cooking and cleaning. He doesn’t feel the responsibility for those things that I do.” 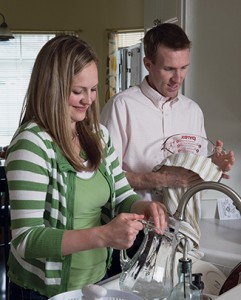 This shared responsibility concept and what it means to men and women is something Holmes would like to study further. “It’s that feeling of ‘If I can’t get this done today, I know someone’s going to help me do it. I’m not the only one who has to worry about this.’”

Because dividing up housework is often so conflict ridden, researchers suggest couples can prevent arguments by clearly communicating and using conflict-management techniques. The idea in many homes that men are mainly breadwinners forms a kind of implied
contract about who should do what. But assuming what another person is thinking lays a foundation for misunderstandings, so it can be helpful to bring the topic out into open discussion. It’s best to at least begin this discussion during courtship and early marriage, but once children come along it becomes an essential, ongoing conversation. Here are some suggestions for how to do this:

• Choose a time to talk when you’re both rested and calm, not when you’re in immediate conflict over who’s doing what.

• Calmly discuss each other’s expectations of how family work should be divided. Let each other talk without interruption and with respect for the other person’s perspective.

• Don’t tackle the division of all household work in one sitting. Focus on the most urgent area first, such as child care. Cover other topics, such as cleaning, yard work, and bill paying during the next conversation.

• Don’t try to divide family work exactly evenly. Shoot for an arrangement that will help each spouse feel satisfied.

After such discussions, don’t expect smooth sailing but realize that each of you will need to adjust, tolerate, and forgive—often. Even with clear communication, needs will change day to day, so neither spouse should be held rigidly to an agreement and both should recognize the need for flexibility. Betsy and Brett know that as long their children are still at home, their plan for division of household labor will never be perfect. They will always need to be amending and tweaking the division, and they’re fine with that.

“I think we’re a really good team and we work well together,” says Brett. “That doesn’t mean I don’t wish this phase [of raising young children] were over sometimes and that I don’t have to remind myself that someday I’ll miss this. But overall, it’s working.”

A BYU professor offers five signs of materialism and four strategies for change.

Everyday people dig deep to give generously to BYU.

The more parents discuss sex with their kids, the less likely the children are to engage in risky sexual behaviors.