A BYU professor offers five signs of materialism and four strategies for change. 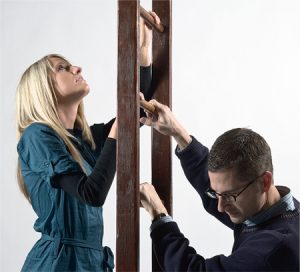 A few years ago, Kevin H. (’78) and Jennifer Arave (’79) Coleman of Columbia, Mo., went through the ordeal of yet another garage sale—sorting through their stuff, pricing it, getting up at the crack of dawn, sitting for hours to sell what they could, then packing up the leftovers and restowing them. Afterwards, Jennifer had an epiphany: “I realized how much I hated doing that. I decided I didn’t ever want to have another garage sale. And it dawned on me—if I quit acquiring stuff, I won’t need to sell it.”

The Colemans and their four children started buying less and focusing more on simple family activities—playing Scrabble, going on bike rides together, and taking meaningful vacations like following the Mormon trail. They even decided not to have cell phones, cable TV, or the Internet. The result, Jennifer says, is a calmer, more peaceful life. “We love the freedom living simply gives us. The less stuff you have, the less you have to take care of, insure, clean, and maintain. There’s just a real sense of freedom.”

The Colemans have managed to take their life in a direction opposite to the common trend among most Americans, who are increasingly focused on possessions and wealth accumulation, says Jason S. Carroll (BS ’96), assistant professor in the School of Family Life. Materialism as a way of thinking—rather than just a way of acting—and how that thinking affects marital satisfaction was the focus of a study recently published by Carroll and colleagues at Texas Tech University and Duke University in the Family and Consumer Sciences Research Journal. With a national sample of 600 couples, they found that materialistic spouses tend to see financial problems, real or perceived, in ways that harm their marriages. Actual income, they found, was less important than attitudes about money and what it can buy. Those who participate in the prevailing trends move in a materialistic direction that detracts from their marriages and their relationships. Those who reject them move away from materialism and toward a richer, more relationship-oriented lifestyle.

Materialism and Its Dangers

Trying to define materialism is like a fish trying to describe water, says Carroll: “We swim in it. It’s all around us. It’s so pervasive that it’s very hard to question it and think about it clearly.” In addition, the material standards that define modest, good, or decadent living creep up over time and are highly subjective.

Those nuances aside, Carroll defines materialism as placing a high importance on material possessions as the means to achieving personal happiness and a sense of well-being. Several studies have shown that people who have a materialistic orientation report lower levels of happiness and feel less connection in relationships. “As you emphasize and value the material, you start to lessen your appreciation for the personal,” says Carroll.

Carroll says we can also become materialistic in an “experience consumer” sense. We might insist our children take violin lessons, have martial arts training, and compete in soccer leagues. “People will protest, ‘That’s talent and skill development! Isn’t that justifiable?’ To a point, sure. But if we take it too far, we have another form of materialism—the experiences that money and resources can buy.”

One of the obvious ways a materialistic person can harm his or her marriage is by overspending. When one or both spouses feel compelled to acquire more possessions than they can afford, debt accrual begins. The ensuing financial pressures can stress a marriage to the breaking point. At the root of spending problems, and less obvious, says Carroll, are a person’s material expectations. Financial conflict in marriage has as much to do with how spouses think about money as how they actually spend it.

Consider, for example, the couple that looks up the economic ladder and focuses on people who have more. Even if they have plenty of income, typically they will perceive themselves as not having enough, which in turn fosters a sense of entitlement, feelings of resentment, and anxiety, says Carroll: “If you see that so-and-so goes to Europe, you might think, ‘I’ve never been to Europe. Part of the good life is a vacation in Europe, but we can’t afford that. Something’s not right.’ So you start to attach your expectations and your sense of quality of life to those higher on the ladder.” At its core, looking up also creates a sense of ingratitude, says Carroll. You lose perspective of what you have.

Looking up the economic ladder and focusing on people who have more, you will perceive yourself as not having enough, which in turn fosters a sense of entitlement, feelings of resentment, and anxiety.

Those who compare themselves with those lower on the economic ladder are less likely to feel distressed about finances, even when their income is modest. “‘I can’t afford to go to Europe, but I can take a trip to Disneyland. I know people who would give anything to be able to afford to take their kids to Disneyland. Wow, I’m blessed.’ So now you’re grateful. You see yourself as fortunate.”

These ways of thinking are powerful, says Carroll. “Materialistic attitudes are a better predictor of finances as a problem in a relationship than is income, which means that even high-income individuals who are materialistic will have financial problems in their marriage.”

Carroll encourages individuals and couples to examine how materialistic they are by considering five questions.

1. Am I looking up the economic ladder or down? Look at your comparison points—your benchmarks. Who do you use as a standard against which to judge your financial success?

2. How much is my mood impacted by either the lack or the attainment of a physical possession? If you go shopping and buy a new outfit and your mood is really elevated, be careful, says Carroll. If you’re happy with your new electronic toy until your neighbor gets a later model, be careful.

3. Do I discard or stop using perfectly good items because they’re not the latest style or technology? If you think, “Those are last year’s jeans, and they still fit but I wouldn’t be seen in them,” you’re on a materialistic path. If you get a big rush from being the first guy in the room who dropped 600 bucks on an iPhone, you’re on the same path.

4. Do I confuse needs and wants? If you justify expenses by talking yourself into believing optional purchases are necessities, you will create financial problems in your marriage. “It’s the old notion that yesterday’s luxuries have become today’s necessities. We convince ourselves that we have to have things.”

5. Do I value and judge people based on material distinctions? “Do you look at the person in the luxury automobile and assume that he is more successful and more intelligent than the individual riding a bicycle?” asks Carroll. “Do you attribute characteristics to people when you know nothing more than their material status?”

If you’ve taken inventory and realized that you could be less materialistic, Carroll suggests four strategies.

1. Be aware of your benchmark and comparison points. If you’re looking up, work on changing that perspective so that you’re focusing—with humility and compassion—on those who have less than you do, not more. Savor the material things you enjoy, be grateful for them, and share what you have with those less fortunate.

2. Resist “parental peer pressure.” Many parents compare themselves to their peers just as their children do. If they can stand up to the pressure of seeing other parents giving their children material things and excessive “experience,” they will cultivate less materialistic attitudes.

3. Realize there is a price to be paid for living the gospel, and some of it is financial. We tend to think we can have large families, pay tithing, keep up our food storage, make charitable contributions, and send children on missions without settling for a lower standard of living. “We have expectations based on an American standard of living that’s largely driven by smaller, two-income families. We want to replicate that standard of living on a single income and all these additional expenses,” says Carroll.

4. Refresh your gospel perspective about material possessions. Review the Savior’s teachings, such as his warning against covetousness in Luke 12:15, “for a man’s life consisteth not in the abundance of the things which he possesseth.” Reread the Book of Mormon for its warnings about how the trappings of prosperity can destroy individual souls and entire nations.

Children who grow up in a non-materialistic household, says Carroll, enjoy countless advantages. They grow up with a deeper appreciation for the things they have, no matter how modest. They learn to be wise in their spending habits. They develop a strong work ethic. Perhaps most important, they are part of a family that highly values interaction rather than possessions, which in turn fosters a sense of security and belonging. “It is a gift to give a child a sense of where true value is found. The key is to teach them to value something they can find regardless of their financial circumstances. It’s something that’s very, very stable and secure—their relationships.”

Resisting a culture that is overwhelmingly materialistic is not easy. Parents will need to put their children’s welfare above other opportunities, perhaps including those that would bring greater wealth. Jennifer Coleman says that when she talks to others about her family’s lifestyle, they seem hungry for it but don’t think they can do it. She realizes her family’s choices might seem severe to some, but she thinks anyone can become even moderately less materialistic and find rich rewards if they do. “They think it’s too much of a sacrifice,” she says, “but really it’s not. If people would just try it, they would find how satisfying and liberating it is.”

From Rags to Riches

Check out these BYU recycling stats.

Y Views: A Richness of Ys

BYU's Personal Enrichment Courses give you the chance to take the classes you always wanted to take.